Pat chose her childhood pediatrician to care for her kids. When her son had a medical emergency with testicular torsion, the Norton Children’s pediatrician directed the family to care that would prove critical. 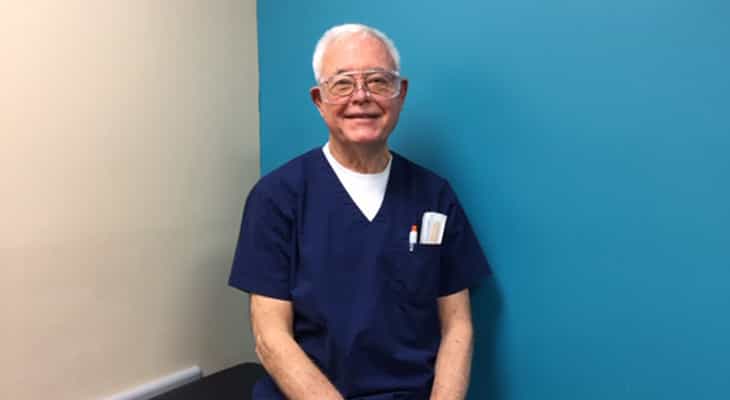 *EDITOR’S NOTE: In this article, parent and child names have been altered for the child’s privacy at their request.

When Pat was selecting a pediatrician for her children, she chose Robert A. Blair, M.D., pediatrician with Norton Children’s Medical Group – Frankfort. Dr. Blair had been her pediatrician when she was a child, so she felt comfortable trusting him with anything that could arise for her children’s health. When her oldest son, Jack, now 17, experienced a medical emergency with testicular torsion, Dr. Blair directed the family to care that would prove critical.

Thinking the teen had a less-severe condition such as an ingrown hair, Pat’s husband took their son to an urgent care clinic. At the clinic, they were told that they should visit the child’s pediatrician. They called the Norton Children’s Medical Group – Frankfort office and were able to be seen the same day by Dr. Blair.

“We feel we got an appointment with Dr. Blair that day not by choice but by luck,” Pat said. “He got him in and out to emergency care, immediately and timely.”

Upon examining the teen, it was clear to Dr. Blair that Pat’s son was not experiencing an ingrown hair.

“Dr. Blair said he suspected fluid may have collected around the testicle, but he didn’t have any way of confirming that because he didn’t have an ultrasound test available,” Pat said. “He told my husband that he wanted him to go to an emergency department as soon as possible.”

Pat’s husband asked Dr. Blair if he had a hospital preference for where they should take their son. He was concerned because their son had never been hospitalized.

“He wanted to take him to the place that would take the best care of him.” Pat said. “Dr. Blair recommended Norton Children’s Hospital, and I’m so glad that he did.”

The family made the drive from Frankfort to Louisville and went to the Norton Children’s Hospital emergency department. After examination and tests, Jeffrey T. White, M.D., Ph.D., pediatric urologist with Norton Children’s Urology, affiliated with UofL School of Medicine, confirmed the diagnosis: testicular torsion. Testicular torsion is a condition where the testicle twists around the spermatic cord, the cord that extends from the groin to the testes and contains the sperm ducts and blood vessels. This twisting causes decreased blood supply to the testicle and can cause permanent damage up to the loss of the testicle in as little as four hours. Torsion can happen to boys and men of any age, but is most common from age 12 to 18.

Jack would need emergency surgery to correct the condition. During the procedure, the urologist untwists the testicle and fixes it down into the scrotum to help keep it from twisting again. This will also be done to the opposite testicle.

“Because of how long he’d had it, we were prepared that his testicles may not be able to be salvaged,” Pat said. “Dr. White went over everything with us, from beginning to end so clearly we didn’t have any questions. As the surgeon and urologist, he took us through every scenario of what could happen.”

According to Pat, the surgery lasted under 30 minutes and had a surprise outcome.

The family was thrilled with the care Dr. White provided and relieved that Jack would recover. The whirlwind from arriving at Norton Children’s Hospital to discharge lasted less than six hours.

Jack is now a couple of months out from his surgery. According to Pat, he’s fully recovered and back to his normal life of working out and playing sports. Jack has been working with his coaches to make sure that he doesn’t push himself and hurt his recovery.

‘Find a pediatrician you trust’

Pat chose Dr. Blair as pediatrician for her children because she knew the kind of care he provided when she was a child.

“So not only was he my doctor as a baby, now, he’s my son’s doctor, and my son is able to get care from him,” Pat said. “That’s what’s so special about it, too. He’s gotten the best of the best, and that’s why we continue to go to that doctor’s office — because he’s there.”

She said it was the trust in Dr. Blair that led her family to Norton Children’s Hospital that day when her husband made the decision of which emergency department to choose.

“You know, Dr. Blair said, ‘Our system is with Norton Children’s, so I’ll be able to keep a close eye on him if you took him there,’” Pat said. “And I can tell you that it’s comforting to have that trust and to know he would steer us to the best place for our child.”