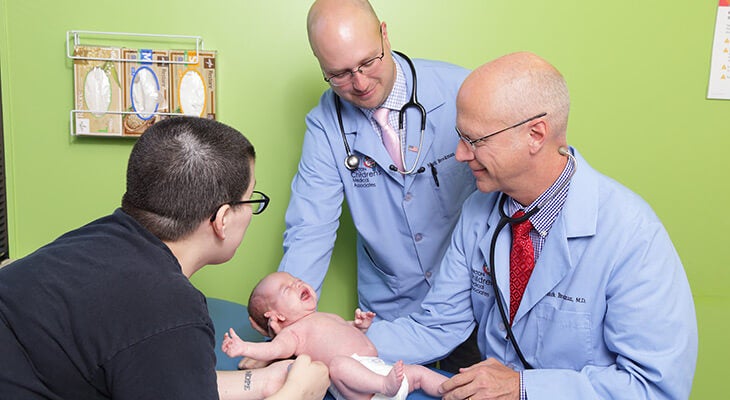 Mark Brockman Jr., M.D., recently joined Norton Children’s Medical Group – Iroquois, where his father, Mark Brockman, M.D., has been practicing for 27 years, and where he first fell in love with medicine.

After graduating from the University of Louisville’s School of Medicine in 2015, Dr. Brockman Jr. interviewed at 12 different pediatric residency programs in the country. He decided to stay at UofL so he could continue training at Norton Children’s Hospital, the same institution where his father once trained.

While Dr. Brockman Sr. never pushed the idea, Dr. Brockman Jr. said his father was the main factor in his decision to enter the medical field and ultimately become a pediatrician.

“I can remember Saturday mornings going with him to round in the hospital and the newborn nursery,” he said. “I always loved going to see him at the office and hanging out with him there. As I got older, I saw what a figurehead my father was and still is in the community. That was something I wanted to emulate.”

The Brockmans’ roots run deep in Louisville’s South End. Edward Brockman, M.D., Dr. Brockman Sr.’s dad and Dr. Brockman Jr.’s grandfather, was a family physician just down the road from where they are practicing now.

“The idea of having three Brockman generations practicing medicine in the South End of Louisville is incredible,” Dr. Brockman Sr. said.

In addition to wanting to emulate his dad, Dr. Brockman Jr. became a pediatrician because it allows him to keep future generations healthy and be there to support them every step of the way.

“I was drawn to pediatrics because children are the future,” he said. “I want to give back to this awesome community by helping the children grow and be there as an advocate for them.”

Dr. Brockman Sr. is excited to work with his son.

“He is not only my son, but a friend, and I now very much look forward to him being a colleague as well,” Dr. Brockman Sr. said.

Dr. Brockman Jr. is happy to work alongside his father and learn from him.

“I look forward to carrying on the legacy of my father and grandfather,” Dr. Brockman Jr. said. “I want to continue the great relationships they and Norton Healthcare have built and provide the best health care possible.”