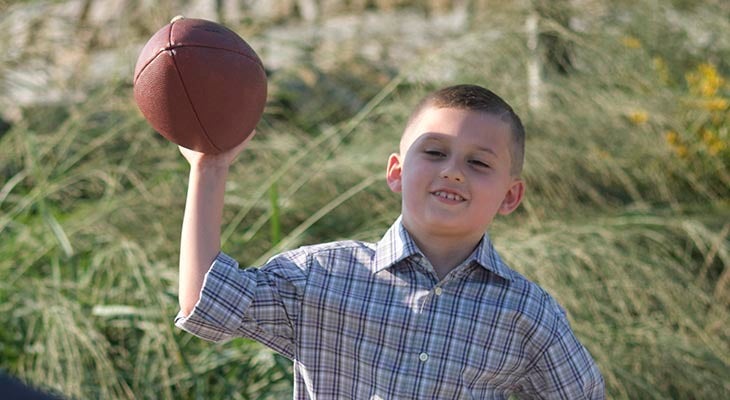 In 2016, not long after his fourth birthday, Jameson Milby started having headaches, nausea and vomiting.

“I’m one of those moms who calls the doctor for a scrape on the knee, so I made an appointment right away,” said his mother, Angela.

The family’s pediatrician, James A. Tavelli, M.D., with Norton Children’s Medical Group – Okolona, ordered an MRI. Twenty-four hours later, Jameson was in surgery at Norton Children’s Hospital to remove a brain tumor. He spent the next three days in intensive care while family and friends awaited word about the biopsy.

“I’ll never forget Dr. Gump walking in the room, telling us that the biopsy showed it was cancerous. “I had always wanted to be a mom, and we had worked so hard to have these babies,” Angela said of Jameson and his twin brother, Jackson.

Angela and Adam, her husband and the boys’ father, tried to stay calm. But learning more about Jameson’s high-risk cancer and treatment options did nothing to quiet their fears. Considering Jameson’s age and aspects of his condition, Norton Children’s Cancer Institute Neuro-Oncology Clinic care team suggested an advanced regimen of chemotherapy, limited radiation and a stem cell transplant — 10 months of treatment in all.

Doctors prepared the family to witness a change in typical 4-year-old behavior, but Jameson’s response surprised everyone. He giggled, jumped on the bed and played baseball on an imaginary field in his hospital room.

“At one point, he was up there with his little bald head and all these tubes coming out of him,” Angela said. “But when we would turn on music, he would always jump up and dance.”

With the comfort of his father’s care and fun distractions planned by friends and family, Jackson quietly weathered his brother’s illness, but the twins clearly missed each other.

“Jackson didn’t always understand why they couldn’t be together,” Angela said. “That really pulled at our heartstrings. We tried to keep everything as normal as possible and include him in everything, but it was difficult.”

“The longer that window gets, the better the chance he will stay in the clear,” Dr. Huang said.

Angela says her family is forever grateful for the medical staff at Norton Children’s.

“You could just tell that every single one of them cared about doing what was best for Jameson,” she said.

After a 10-month hospital stay, Jameson was thrilled to come home and resume his role as his brother’s keeper.

Now a second-grade student at Crossroads Elementary School in Mount Washington, Kentucky, Jameson looks forward to checkups with what he calls his “funny doctors,” as well as occasional play dates with Nurse Julie, a Norton Children’s Cancer Institute caregiver who formed a special bond with the Milby family.

“My main focus is just doing whatever they want to do,” Angela said of her boys. “Life is short, and we’re still catching up on all the stuff they missed that year.”