Providing pediatric neurological care in Owensboro increases access in the Western Kentucky city and surrounding areas such as Evansville and Tell City, Indiana. In most cases, the location saves families the two-hour or so drive to Louisville for care. 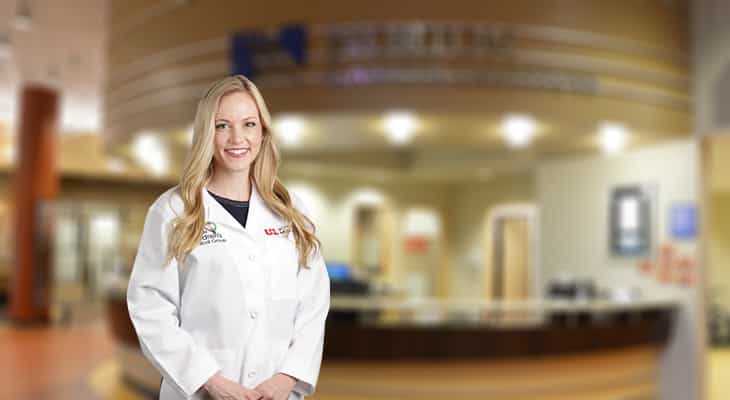 “I really try to keep my patient care family-centered and listen to each family’s needs and make an individual plan of care based off of that,” Stephanie said.

Providing pediatric neurological care in Owensboro increases access in the Western Kentucky city and surrounding areas such as Henderson, Kentucky, Evansville and Tell City, Indiana. In most cases, the location saves families the two-hour or so drive to Louisville for care.

Stephanie is part of Norton Children’s Neuroscience Institute, affiliated with the UofL School of Medicine. She is connected to the specialists in Louisville and collaborates with them on a daily basis.

At the Owensboro clinic, Stephanie and the team have access to electroencephalographic studies that can be performed for one to six hours. The results of the test are analyzed by a Norton Children’s Neuroscience Institute pediatric neurologist. Stephanie is also a resource for pediatricians and other providers in the Owensboro area.

Stephanie already may be familiar to some in the area. Before joining Norton Children’s Neuroscience Institute, Stephanie worked as a pediatric neurology nurse practitioner in Evansville for three years.

Stephanie collaborates with neuroscience specialists including Vinay Puri, M.D., who is neurologist-in-chief  at Norton Children’s Hospital and is the Gretchen C. Rounsavall medical director in child neurology.

Sophisticated care closer to home in Kentucky and Southern Indiana.

Stephanie began her nursing career as a registered nurse in the pediatric intensive care unit at an Evansville hospital. She became fascinated with pediatric neurology while working at an outpatient clinic with Dr. Puri while she was still in graduate school. Stephanie went back to school and received her master’s degree from Vanderbilt University in Nashville, Tennessee, in 2016.

“I like the complexity of neurology patients and how you focus on patients as a whole,” Stephanie said.

Stephanie is board certified as a pediatric nurse practitioner by the Pediatric Nursing Certification Board.

Stephanie grew up in and currently lives in the Evansville area. Her husband, Chad, is a farmer, and grows corn and soybeans. The couple has two boys.