Multiple specialists are available to spina bifida patients in one location. 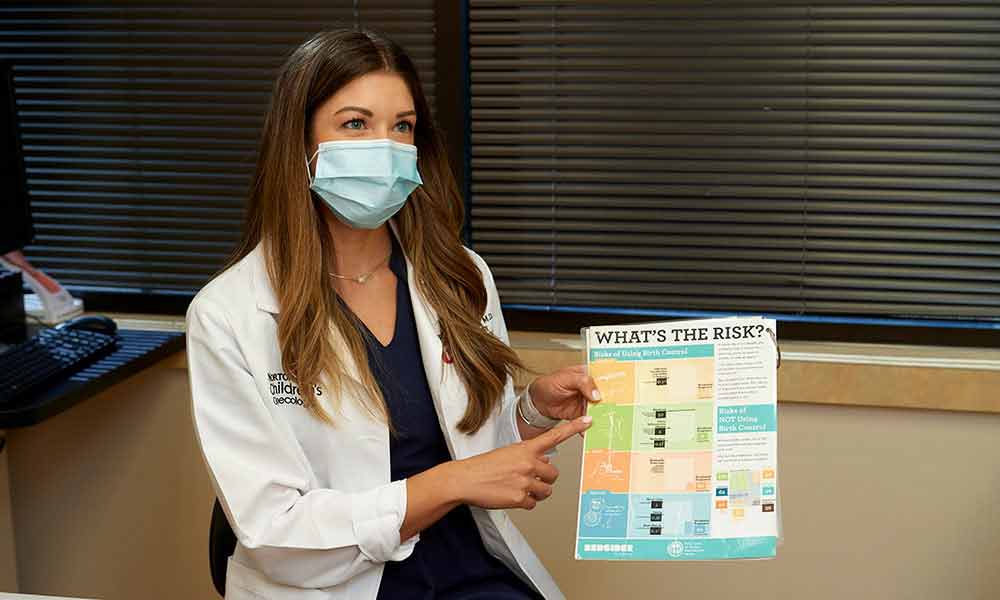 As a medical student, Kimberly S. Huhmann, M.D., was interested in both pediatrics and obstetrics/gynecology. It was during her residency that Dr. Huhmann started considering combining her interests as a pediatric and adolescent gynecology specialist.

“It’s the perfect meld of patient care that’s both surgical and procedural, and has continuity,” Dr. Huhmann said. “I love what I do.”

As a pediatric and adolescent gynecologist, Dr. Huhmann participates in Norton Children’s Spina Bifida Clinic. Gynecology, orthopedics, urology and neurosciences are some of the specialties that provide coordinated, individualized care in the multidisciplinary clinic.

“A lot of these kids have urinary and fecal incontinence, and so hygiene can be very complicated. To add period blood on top of that is another stress on patients and their families,” Dr. Huhmann said.

Girls with spina bifida often receive hormones to suppress menstruation, and Dr. Huhmann talks with them about puberty and makes sure they are progressing as expected.

A childhood dream to be a physicianDr. Huhmann grew up in Omaha, Nebraska. Her father was in the Air Force, stationed at nearby Offutt Air Force Base. According to Dr. Huhmann, even though there were no doctors or nurses in her extended family, she became interested in medicine from the time she was 7 or 8 years old.

“I just started watching the medical shows on TV,” Dr. Huhmann said. “I had an anatomy doll, and you could take all the pieces apart and put them back as a puzzle. As I got older, I was gifted a medical encyclopedia, and I would just sit in my room and read random things.”

After attending the University of Nebraska College of Medicine for medical school and residency in Omaha, Dr. Huhmann did her pediatric and adolescent gynecology fellowship at Tufts Medical Center in Boston, Massachusetts.

Dr. Huhmann joined Norton Children’s Gynecology, affiliated with the UofL School of Medicine, in September. She is one of six pediatric gynecology providers: three physicians and three nurse practitioners.

The full range of spina bifida specialists in one place on the same day.

In addition to treating children in an outpatient setting and in surgery, according to Dr. Huhmann, an important part of her job is putting children at ease.

“It’s a lot of normalizing what they’re feeling, normalizing their anatomy, normalizing the changes their body is going through — just trying to make them more comfortable. It’s a very vulnerable topic,” Dr. Huhmann said.

For example, according to Dr. Huhmann she will typically perform a girl’s first pelvic exam.

Dr. Huhmann does IUD and Nexplanon insertions and removals. In surgery, she performs hymenectomies, vaginal septum excisions, ovarian cystectomies and surgical correction of Müllerian anomalies. In younger children, she also performs vaginal exams in the operating room, with the patient under anesthesia.

New to Louisville, Dr. Huhmann said she likes the warm weather. In her free time, she enjoys cooking and spending time in the beautiful parks and hiking areas close by, where she is able to disconnect from the electronic world.