Villanovas support 8-year-old Morgan, who was diagnosed with Wilms tumor three years ago, and their extended pediatric cancer family. 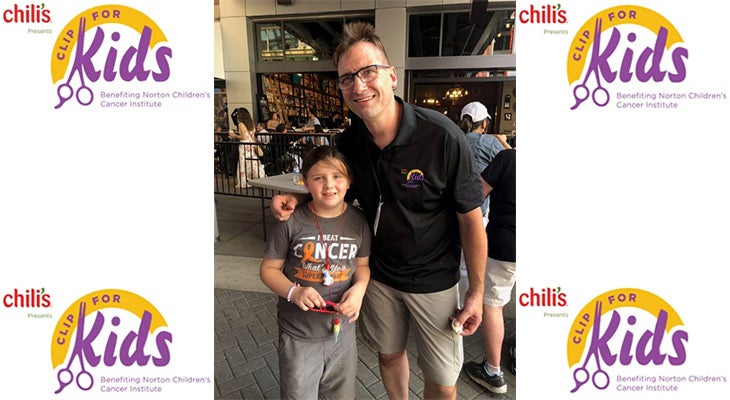 It was a few days after Morgan Villanova’s fifth birthday in September 2015, just as she was beginning kindergarten at Goldsmith Elementary School in Louisville, when she and her family received life-changing news. Morgan had cancer.

The then 5-year-old, who is the youngest of eight children, was diagnosed with stage two nephroblastoma, also known as Wilms tumor. Wilms tumor is the most common type of kidney cancer in children. About 9 out of 10 kidney cancers in children are Wilms tumors.

Morgan went through six months of chemotherapy at Norton Children’s Cancer Institute, affiliated with the University of Louisville, which caused her to lose her hair among other difficult side effects.

“Morgan just had her three year scans,” said Denise Villanova, Morgan’s mom, “and we found out she is three years cancer-free.”

Now in third grade, Morgan is getting back to doing the things she enjoys most, such as karate and soccer.

Mom and dad will shave their heads

Denise and her husband, Dwayne Villanova, Morgan’s dad, will have their heads shaved on stage at Chili’s® Clip for Kids on Sunday, May 19, at Fourth Street Live!, in honor of Morgan. This will be their second year participating in the fundraising event for Norton Children’s Cancer Institute.

“My child didn’t have a choice to lose her hair,” said Denise about why she chooses to participate.

The annual event raises funds for Norton Children’s Cancer Institute, affiliated with the University of Louisville.

The Villanovas are not only participating in Chili’s Clip for Kids in honor of their daughter, they also are doing it in honor of other kids and families they have met throughout their experience at Norton Children’s Cancer Institute.

“They’re like our family,” Denise said. “When something happens to one of them, it’s like it’s your own. We’re happy that our daughter is doing well, but you also feel guilt over why my child is OK when someone else’s isn’t?”

Denise said Morgan had a friend from day care named Addie who passed away from a brain tumor at age 2.

“It was difficult going through that with a 5-year-old,” Denise said. “It was rough. You feel for these families.

“I’m doing this in honor of my daughter Morgan, for all the kids who are still fighting and for all the angels who have gained their wings.”