Leyan couldn’t get Apert syndrome treatment in the West Bank. Local team comes together to save her from rare disorder. 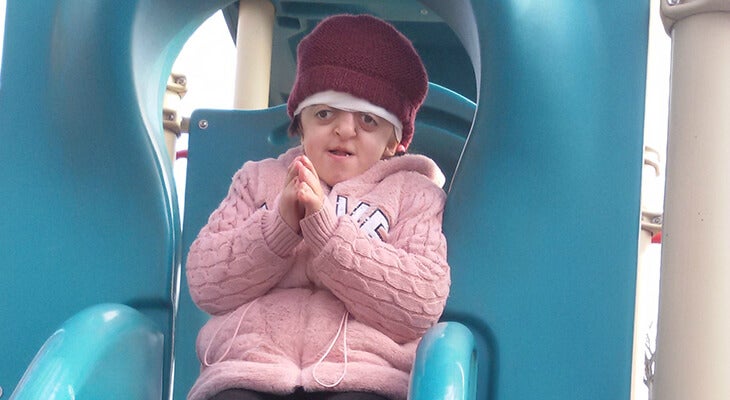 Ian Mutchnick, M.D., pediatric neurosurgeon, spends most of his days saving young lives at Norton Children’s Hospital. But in 2015, he was 6,239 miles away, donating his time to provide free neurosurgical care to kids in Ramallah, a city in the West Bank that experiences frequent political unrest. A mom walked into the clinic with her shy, quiet daughter in tow.

Nine-year-old Leyan Albazzour was born with Apert syndrome, a rare genetic defect in which the skull and facial bones are underdeveloped. The skull prematurely fuses and is unable to grow large enough for the brain. The condition also causes the fingers and toes to be deformed.

“Leyan was in a tough spot,” Dr. Mutchnick said. “Her brain was growing but her skull wasn’t.”

Sadly, Leyan really needed surgery when she was under 1 year old, but the care wasn’t available in the West Bank. The lack of treatment put immense pressure on her brain, causing developmental delays and pain. If Leyan didn’t get help soon, the condition would eventually kill her. She and her mother, Montaha, entered the clinic praying someone could save the girl’s life.

“It was a dream of mine,” Montaha said through an interpreter.

Dr. Mutchnick examined Leyan. It was clear she needed help, but the type of surgery was far too complicated to perform in Ramallah.

“Still, we had to do something,” Dr. Mutchnick said. “I couldn’t just leave her in this state.”

It takes a village

“We knew this complex surgery would make Leyan’s life exponentially better and give her a future that otherwise wouldn’t exist,” Dr. Rapp said.

Now they needed a way to get the family to Louisville.

The Kentucky chapter of Healing the Children, which reviews and manages Norton Children’s international charity cases, and the Palestine Children’s Relief Fund (PCRF) made arrangements for Leyan and Montaha’s visas, flights, transportation and interpreter for their three-month stay.

The plans were in place. Leyan was going to get the treatment she needed.

Leyan and Montaha arrived in Louisville in January. It was a culture shock to say the least. The temperature in Ramallah rarely dips below 40 degrees. The family doesn’t speak English. And Kentucky looks nothing like the West Bank. PCRF members began visiting the family every day and bringing them Palestinian home-cooked meals.

But there was little time to get settled. There were appointments to get to, doctors to meet and plans to be finalized. The lifesaving mission was underway.

Drs. Mutchnick and Rapp performed a cranial vault expansion. The procedure involved placing devices called distractors on Leyan’s head that would expand her skull over a period of time — countering the effects of Apert syndrome. After the skull was stretched out, bone would grow in to fill the gap. Once the new bone is in place, doctors can remove the distractors, and Leyan can return home.

Leyan has found her favorite spot in Louisville. It’s Waterfront Park. She loves to run on the playground and fly down the slides. She smiles — a sign of happiness and maybe a little hope for the future.

“Because Leyan is still young, the surgery could enhance her development now that her brain isn’t too squeezed,” Dr. Mutchnick said. “There could also be some other surgery opportunities in the future to help with the development of her face.”

Regardless of the road ahead, Montaha is grateful for everyone involved in saving Leyan’s life.

“I am very appreciative,” Montaha said. “My family and I feel tremendous gratitude to everyone who is providing all this care. We are thankful to all the people who touched our lives and are helping with Leyan’s treatment.