Because of all the throwing they do, pitchers and catchers are the most susceptible to an overuse injury, but no position is immune. For pitchers, curveballs put more stress on the elbow. 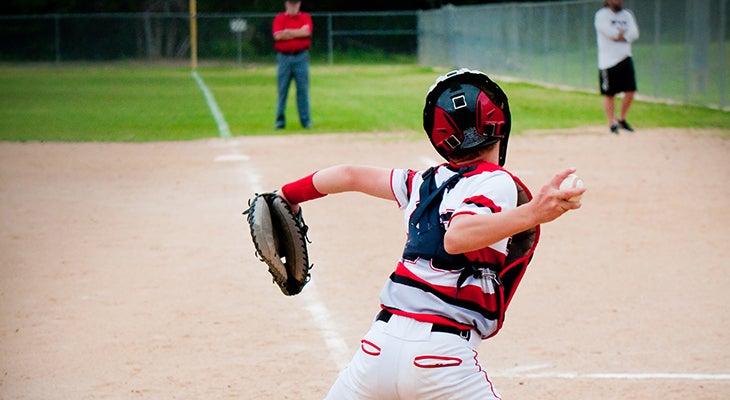 Youth baseball puts a lot of stress on young arms, which can result in shoulder or elbow injuries sometimes called “little league shoulder” or elbow.

“These kids are throwing harder sometimes than their elbow can take,” said Joshua W. Meier, M.D., pediatric orthopedic surgeon with Norton Children’s Orthopedics of Louisville, affiliated with the UofL School of Medicine.

Elbow and shoulder injuries also can occur as the result of overuse, according to Dr. Meier. Repetition can put strain on an arm and end up making it painful to throw.

The treatment for overuse injuries is rest, from two to six weeks, depending on the severity of the injury.

“Usually, once they rest or they stop playing, the pain goes away,” Dr. Meier said.

Ice and anti-inflammatories can help with pain and swelling.

Overuse puts stress on growing bones, which are easier to injure because they have growth plates — a line of cartilage. Growth plates allow bones to get longer and bigger around over time. As the child grows, the cartilage in the growth plates is replaced by bone.

“These are easier to injure oftentimes in kids because they are a weaker part of the bone,” Dr. Meier said.

The risk of an overuse injury goes up when a young athlete specializes in baseball and plays the sport throughout the year, according to Dr. Meier.

“There’s travel teams, select teams, school teams,” Dr. Meier said. “If all you do every month is play baseball and throw, you are definitely overloading certain muscle groups and joints that you wouldn’t be if you did other things in addition to throwing.”

Because of all the throwing they do, pitchers and catchers are the most susceptible to an overuse injury, but no position is immune. For pitchers, curveballs put more stress on the elbow.

Rarely do overuse injuries cause any long-term growth issues, according to Dr. Meier.

We treat sports-related orthopedic issues in children to help minimize any pain or conditions that can stay with them into adulthood.

To prevent overuse injuries, youth baseball typically has adopted pitch guidelines and limits the number of pitches a pitcher can throw in a given day or during the week.

“A good organization and coach should be adhering to these pitch guidelines,” Dr. Meier said, adding that some players may try to get around them.

“One issue that sometimes we run into is that kids will cheat a little bit by playing on multiple teams. They might play on their Little League team and then their travel ball team. Their coaches might be different, so they can get around the pitch and throwing guidelines,” Dr. Meier said.

Dr. Meier recommends young athletes cross-train and play different sports during the year or participate in other activities rather than specialize on a single sport throughout the year.