Osteosarcoma — a cancer in the bone — mostly affects children and young adults. Know the symptoms of osteosarcoma. 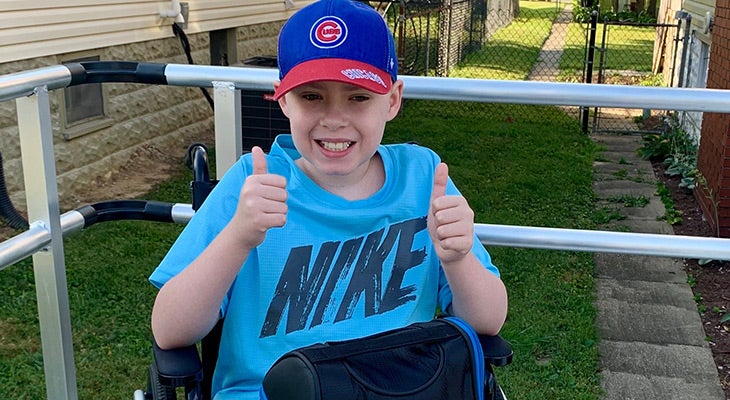 Symptoms of osteosarcoma in kids

Pain and swelling are common signs of osteosarcoma. It is not unusual for active children and teenagers to experience limb pain as they grow, but any pain that lingers beyond two weeks should be checked by a medical provider, especially if it involves swelling.

According to the American Cancer Society, most osteosarcomas occur in children and young adults. While any of the body’s 206 bones can be affected, half of these tumors occur near the knee. These tumors tend to develop near growth points that get a lot of activity.

Osteosarcoma is relatively rare, however some inherited conditions can increase its occurrence. Three of Felix’s maternal relatives have had forms of this cancer, so follow-up is being done with the family.

Janie Lewis and her grandson, Felix, age 9, share a surprising birthday bond. In 2018, both Janie and Felix learned on their birthdays that they had cancer.

On May 23, Janie found out that a routine mammogram revealed she had breast cancer. On Oct. 13, as Janie completed chemotherapy, Felix was diagnosed with osteosarcoma, a type of bone cancer.

Felix was having pain in his left leg. When his thigh became swollen, Janie took him to Norton Children’s Hospital’s emergency department. A magnetic resonance imaging (MRI) scan showed a 16-centimeter tumor — about 6 inches and bigger than a large grapefruit — in his femur.

Initially doctors raised the possibility that Felix’s leg might need to be amputated. Thankfully that did not happen, “but from that moment, life changed,” Janie said.

‘Nana, will this be my last Christmas?’

On Jan. 16, 2019, Rodolfo A. Zamora Rendich, M.D., orthopedic oncologist with UofL Physicians – Orthopedics, removed Felix’s femur and replaced it with a transplant in a 16 hour surgery. Felix was hospitalized until February and under strict instructions to put no weight on his leg for months.

It was a tough time for Felix, described by Janie as “usually funny and active.” Family and friends provided love and support. Felix loved the iPad he got from one group and the gaming system provided by child life therapists and staff, who address various patient and family needs.

Still, the ordeal took its toll. Felix developed histoplasmosis — a lung infection sometimes associated with impaired immune systems — and a persistent fever. His weight dropped to 49 pounds. He was self-conscious about losing his hair, and he was worried.

He asked Janie, “Nana, will this be my last Christmas?”

She reminded Felix that she had survived cancer, and he could too. Her hair had grown back, and his would too.

Through it all, the 7 West team “became like family” to Janie. According to Janie, oncology patient navigator Frances Price, R.N., has been an invaluable resource.

“She connected me with other families who had faced a similar diagnosis,” Janie said. “This was incredibly helpful.”

Felix could give the staff a hard time, but he grew to love them. These relationships were crucial, given his restricted mobility, according to Janie.

Back to school and back to his old self

Everyone celebrated when Felix was able to come to 7 West’s community room for his end-of-chemo party, a favorite tradition on the unit. He surprised everyone with his laughter and ukulele playing.

Felix missed an entire year of school when first diagnosed, but with physical rehabilitation he was able to return this year for half-days at Maple Elementary in Jeffersonville, Indiana. He uses a cane or wheelchair as needed. According to Janie, everyone at the school has been supportive and understanding.

Taryn Johnson, a certified child life specialist with Norton Children’s Hospital, visited Felix’s class to tell them more about cancer. She used a stuffed animal to show where the femur is located, and how a port is used for medications.

Taryn was surprised to see the boy who sometimes refused to leave his hospital room now so full of fun and spirit that day. When she asked what the class knew about cancer, Felix enjoyed setting things straight when some students answered, “You die from cancer.”

Janie was there and shared a photo album she had created to capture memories of Felix’s cancer journey.

“I thought he’ll value this one day to see how far he’s come,” she said.