‘A true hero and inspiration,’ Jesse managed a smile when Bob Wilkinson pinned the medals to the boy’s pillow. 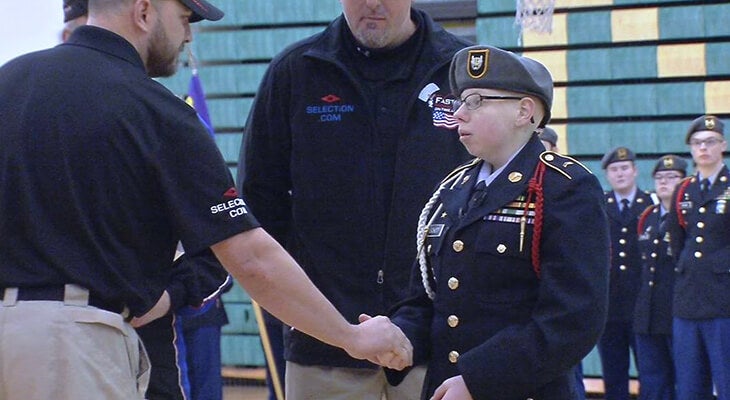 An old proverb advises that it’s not glittering weapons that fight the fight, but a hero’s heart. Bob Wilkinson, R.N., probably understands this better than most.

A former combat soldier, Bob, 63, served in the Army for 20 years. After retiring as a first sergeant, he began a career in nursing. He has spent the past 16 years at Norton Children’s Hospital, working closely on 7 West with children and families bravely facing cancer.

“To me, and many others, Jesse was a true hero and inspiration,” Bob said.

Despite many setbacks, Jesse often described himself as “lucky.” He was excited last August to command his JROTC color guard for the first football game of the season.

Before the game, Jesse told a reporter he had never been game commander before.

“I think it’s a wonderful thing,” he said.

By December, Jesse’s cancer had spread, but he still took part in a competitive ROTC drill meet. He also organized Boy Scout Troop 007’s project to collect damaged flags for proper disposal. In January, the Kentucky National Guard recognized him as an honorary member.

A smile when Bob pinned the medals to his pillow

Early this summer, Jesse was re-admitted to 7 West. Family and caregivers knew his journey was nearing its end.

As his shift ended one day, Bob made a decision. At his Rineyville, Kentucky, home he retrieved two medals awarded to him during his military service: a Bronze Star for heroic achievement in combat during Operation Desert Storm, and a Soldier’s Medal for heroism not involving an armed enemy conflict.

When Bob returned to work, he pinned the medals on Jesse’s pillow. Kyle Schott, Jesse’s grandfather, said Jesse was unable to speak, but he smiled.

Norton Children’s Cancer Institute, affiliated with the University of Louisville

Offering unparalleled cancer care to families in Kentucky, Southern Indiana and beyond.

“It touched my heart that Bob would do this,” Kyle said. “The staff at Norton Children’s couldn’t be any better. They loved Jesse and were a part of our family.”

When Bob was asked about sharing this story, the humble husband, father and grandfather insisted the focus be on Jesse and his family’s courage.

“His grandparents, aunts and uncles showed incredible grace, strength and love through it all,” Bob said.

A hero’s heart, it seems, fights the good fight in many ways.