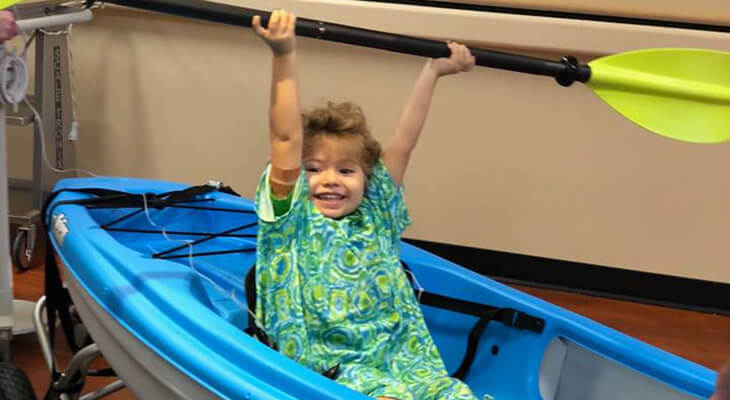 Earlier this fall, Northwestern Mutual held a contest for pediatric hospitals to host a hands-on camp experience for children. As a result of votes, Norton Children’s Hospital was one of 10 children’s hospitals to receive a $5,000 grant to bring the joy and feeling of camping to children unable to travel due to their health.

“When children and their families receive a cancer diagnosis, simple childhood moments may feel as though they are taken away,” said Eric Christophersen, president of the Northwestern Mutual Foundation. “We believe every child deserves the opportunity to live life to the fullest, and Northwestern Mutual is working with camps and partners nationwide to help bring that sense of relief to kids and families facing a childhood cancer diagnosis.”

“We’re thankful for Northwestern Mutual’s support of the families who spend weeks and even months in the Addison Jo Blair Cancer Care Center,” said Lynnie Meyer, Ed.D., R.N., CFRE, senior vice president and chief development officer, Norton Healthcare. “This experience meant a great deal to all of the children who were able to participate.”

Launched in 2012, Northwestern Mutual’s Childhood Cancer Program was developed to find better treatments and cures for pediatric cancer while providing family and patient support and aiding survivors who struggle with the late-term effects of treatment. With the help of its employees and financial advisors nationwide, the program has contributed more than $20 million to the cause, funded more than 240,000 hours of research and leveraged nonprofit partners — including camps and retreats — to help more kids and families live life to the fullest.