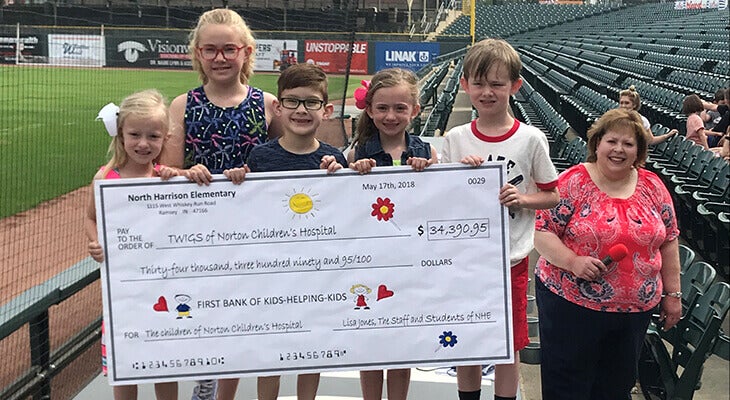 About 300 students from North Harrison Elementary School in Ramsey, Indiana, gathered at Louisville Slugger Field on Thursday, May 17, to celebrate their fundraising success for Norton Children’s Hospital.

The students raised more than $34,000 for Norton Children’s Hospital during a recent walk-a-thon. This event marked the school’s 30th year of fundraising for the hospital, making them Norton Healthcare’s longest consecutive school donor.

“My favorite part about this project is getting to work with students who give back because they feel that’s just the right thing to do,” Courtney said.

Want to be a Champion for Kids?

A check presentation with a special reveal of the dollar amount the students raised kicked off the day’s festivities. In addition to having the ballpark to themselves, the students enjoyed a morning filled with face painting, inflatable obstacle courses, a playground, bean bag toss and hanging out with the Louisville Bats’ mascot, Buddy Bat. Many students also took this time to write cards to Norton Children’s Hospital patients.

“Several of them have been directly affected by Norton Children’s Hospital, and it’s remarkable to see those children giving back to the hospital that impacted them in such a positive way,” Courtney said.