For 43 years, this NICU nurse has been caring for Kentucky’s tiniest patients

For 43 years, this NICU nurse has been caring for Kentucky’s tiniest patients 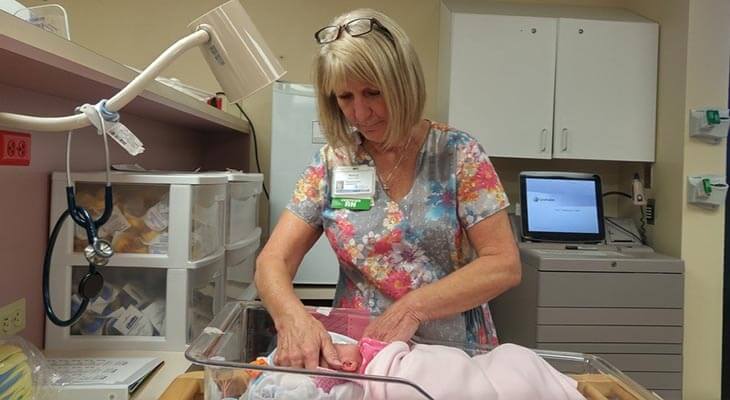 Nancy Allgood, R.N., and the team of specialists in the Norton Children’s Hospital neonatal intensive care unit (NICU) had to act fast.

“We revived her but were afraid the damage had been done,” said Allgood, who’s spent the past 43 years as a NICU nurse. “We cooled her little body to 93 degrees to prevent her brain from swelling and spent the next three days warming her back up. It didn’t look good.”

This is just one example of how Allgood cares for Kentucky’s tiniest patients. At any given time, the Norton Children’s Hospital NICU downtown can have more than 100 infants. Many are born weeks or months premature, other babies are born to term but suffer from potentially fatal heart and lung issues. Some begin life fighting the effects of withdrawal, being born to drug-addicted moms.

NICU: then and now

Even back in 1974, Allgood knew she wanted to be a NICU nurse.

You can donate or visit the 28th annual Festival of Trees & Lights.

“When I had breaks during nursing school, I would go to the nursery and look through the window at all the babies,” she said. “It was my calling to help them.”

Allgood sometimes marvels at how far treatments have come over the past 40 years. Back then, babies born earlier than 33 weeks didn’t survive. Today, that number stands at 23 weeks, a more than two-month improvement.

“I’ve held babies weighing less than a pound,” Allgood said. “They pretty much fit in the palm of your hand — and they survive.”

Perhaps even more memorable, Allgood said, is the advancement of infant heart care. She recalled a boy named Jason, who was diagnosed with hypoplastic left heart syndrome decades ago. Back then, the condition was fatal. And Jason’s case is one she’ll never forget.

“He died in my arms,” Allgood said. “I sat there rocking him, even after he’d passed. I just couldn’t leave him. He was such a beautiful baby.”

Since that time, she’s seen heart care entirely change the game. Allgood was one of the nurses who cared for Robbie Cardin, the infant who made Norton Children’s Hospital only the second site in America to complete a successful infant heart transplant. She witnessed the invention of extracorporeal membrane oxygenation (ECMO), heart and lung support that has saved more than 1,000 local babies over the years. She’s seen surgeons reconstruct hearts no bigger than a walnut.

“It’s truly amazing what we can do for babies now,” she said. “And it’s only going to get better.”

To be a long-time nurse at Norton Children’s Hospital, you must really love what you do. And that means going beyond the job description — something Allgood embraces. About 10 years ago, she treated a baby who initially couldn’t breathe on her own. As the girl was being discharged — right before Thanksgiving — Allgood learned the family had no money.

“They had nothing for Christmas, so the nurses on the unit got together and bought presents for the whole family,” she said. “There were wagons full of gifts we delivered to their home.”

But many times it’s not material things that make the biggest difference. It’s being there for the parents as they endure their own emotional trauma from having a critically ill newborn in the NICU.

“They are in a situation where they have no control,” Allgood said. “They’re overwhelmed, exhausted and scared. Most times, they just need someone to vent to who can offer comfort and encouragement. In the end, they become like family.”

NICU of the future

Neonatal care continues to be a focus at Norton Children’s Hospital. In early 2017, the hospital announced a $78 million expansion, which includes creating the Jennifer Lawrence Cardiac Intensive Care Unit, as well as renovations to the NICU and intermediate care nursery.

Allgood is excited for the improvements but says her biggest hope is they won’t be needed as much in the decades to come.

“My dream is that all babies are born to term, there are more options for prenatal surgeries, that moms have more access to prenatal care,” she said. “That way, babies are entering the world the way they’re supposed to, and families can just focus on being families.”

By the way, that baby born without a heartbeat? After the team warmed her up, they performed an MRI on her brain. It came back completely normal. She was healthy and after several weeks, started eating on her own.