Therapists can create interactive simulations, such as walking in a forest, riding on a boat or flying a kite. 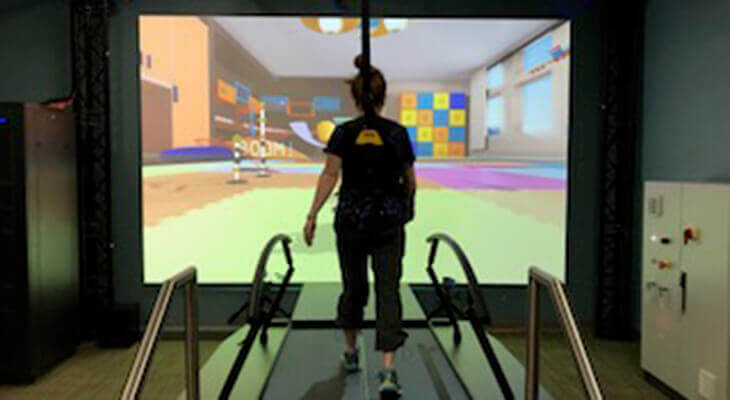 Caleb McKenzie has been getting physical therapy for cerebral palsy since he was about 9 months old. Now 4, Caleb goes to therapy four times a week to master walking.

“It is something the rest of us take for granted, and he has difficulty with every single step he takes,” said

“To keep his attention on something and do it over and over again, four days a week, the same thing every time is going to get boring,” Dr. Jacks said.

But thanks to new technology at the Norton Mobility Lab, improving his gait doesn’t feel like therapy. To Caleb, it’s more like a game.

The Norton Mobility Lab is the only one of its kind in Kentucky. It’s taking physical therapy to a whole new level with its virtual reality capabilities.

A simulation designed just for Caleb helps with his biggest struggle — lifting his knees in a marching position.

“The therapists came up with a great program that has cars coming in an intersection and in order to allow a car to pull through, he has to lift his feet to let the car come under his foot,” Dr. Jacks said.

Therapists can create a number of different interactive simulations, such as walking in a forest, riding on a boat or flying a kite.

A massive projection screen and treadmill with overhead suspension capabilities work together to create the simulations. Wearable sensors and cameras track the patient’s movements so physicians can assess progress and adjust therapies.

Caleb is making a lot of progress.

To make an appointment with Norton Children’s Orthopedics of Louisville,

“Over time, in another few years, I think he will have a lot less bracing, and he will be more independent, be able to walk long distances and hopefully play some sports — the sky is the limit,” Dr. Jacks said.

The Norton Mobility Lab is a tool to help kids like Caleb get there. The Children’s Hospital Foundation funded the lab, thanks to generous donations.

If your provider has recommended mobility or gait therapy, or if you have questions about the lab, call (502) 559-1862.