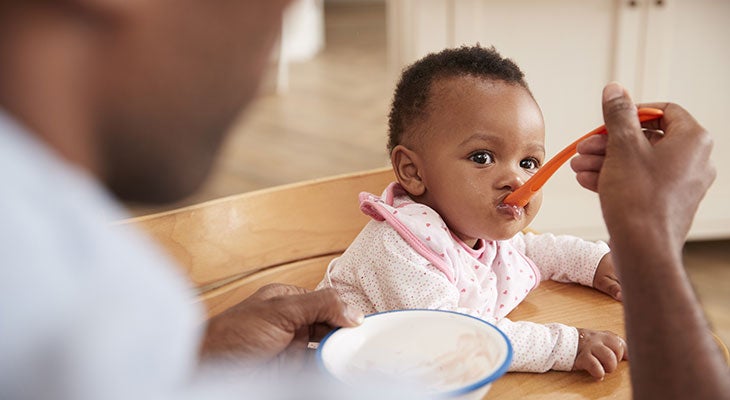 Babies should be introduced “nutrient dense” and “potentially allergenic foods” at 6 months old, according to new guidelines from the U.S. Department of Agriculture (USDA) and the Department of Health and Human Services.

The recommendations state babies should be introduced to foods such as peanuts, eggs, cow’s milk products, tree nuts, wheat, soy, shellfish and other kinds of fish. The expectation is that by being introduced at an early age, children may have reduced risk of developing a food allergy.

“As more data has been collected over the years, experts believe that a baby’s immune system and digestive tract can adapt to new foods,” said Jameel T. Clark, M.D., pediatrician with Norton Children’s Medical Group – Dixie. “The immune system in the first six months can adapt more so than later in life, so there may be benefit to trying these foods early.”

The USDA also now recommends babies receive supplemental vitamin D soon after birth, as breast milk often doesn’t provide enough on its own. Additionally, according to the guidelines, babies as young as 6 months and pregnant people should eat more seafood, provided it’s low in mercury, as seafood has been associated with potential cognitive development in young children.

Dr. Clark understands parents may have some concerns about these new guidelines. He believes that further guidance concerning food allergy avoidance will come soon from the American Academy of Pediatrics (AAP) and recommends talking to your child’s pediatrician for more information.

“Always consult your child’s physician before introducing new food into their routine,” Dr. Clark said. “It’s also important to carefully monitor your child when giving these foods for the first time.”