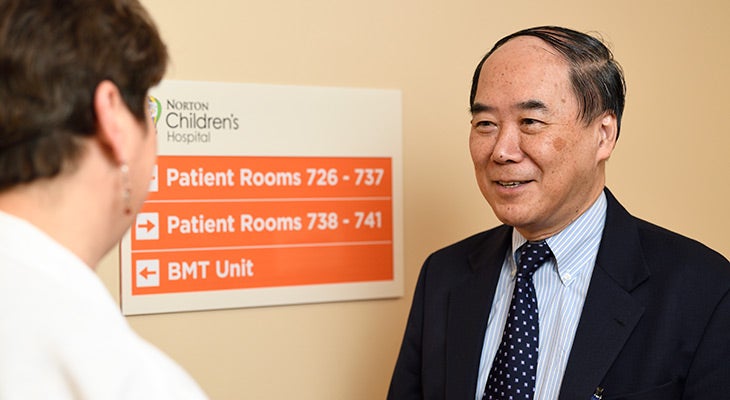 A new hematologist in Louisville is putting international research to practice for local kids. His specialty: blood and bone marrow disorders such as leukemia and immune deficiency.

William T. Tse, M.D., Ph.D., with UofL Physicians – Pediatric Cancer and Blood Disorders, is the new director of the Norton Children’s Cancer Institute Pediatric Blood and Marrow Transplant Program. Norton Children’s Cancer Institute, affiliated with the University of Louisville, has introduced a variation on blood and marrow transplants that can translate to a lower dose of chemotherapy.

The procedure, called reduced intensity conditioning transplant, can mean less pain and other side effects. Children can often have treatments in a clinic closer to home, without having to stay at the hospital for a prolonged period of time.

‘A cure for what was an incurable disease’

“With this syndrome, the long-term survival rate is zero without treatment. With this treatment, the chance that this boy will grow up to be a normal, healthy child is close to 100 percent. We’re talking about a cure for what was an incurable disease,” Dr. Tse said. “It’s very satisfying.”

The Pediatric Blood and Marrow Transplant Program cares for children with recurrent or high-risk leukemia and solid tumors; nonmalignant immunodeficiency syndromes like SCID; and diseases such as sickle cell anemia, where the bone marrow is not producing healthy blood cells.

With an immunotherapy treatment called CAR T (chimeric antigen receptor T cells), a child’s own immune system can be reprogrammed to kill cancer cells. The treatment received U.S. Food and Drug Administration approval in 2017 for acute lymphoblastic leukemia (ALL) in children. Dr. Tse’s goal is to offer this CAR T immunotherapy treatment at Norton Children’s Hospital within the next year.

Dr. Tse also is working to bring a clinical trial to Norton Children’s Hospital using CAR T for acute myeloid leukemia and to work with CAR T as a potential treatment for solid tumors. Clinical trials can offer patients access to new treatments while they are still being tested.

“For decades, the only options for cancer patients have been surgery, radiation and chemotherapy. Now there is immunotherapy. In the next five to 10 years, this will continue to get better and better,” he said.

According to Dr. Tse, the cost also could come down as research advances.

“We hope in the future we can use off-the-shelf, universal-donor immune cells in immunotherapy, which will help bring down the cost of this important treatment,” Dr. Tse said.

Dr. Tse said he was drawn to pediatric blood and marrow transplantation when he was in medical school because it offered the possibility of curing previously fatal diseases.

“We do this because it is a rewarding experience. We can make a difference,” he said.