After a three-hour procedure, surgeons removed the tumor near child’s aorta and vertebrae, leaving low risk of recurrence. 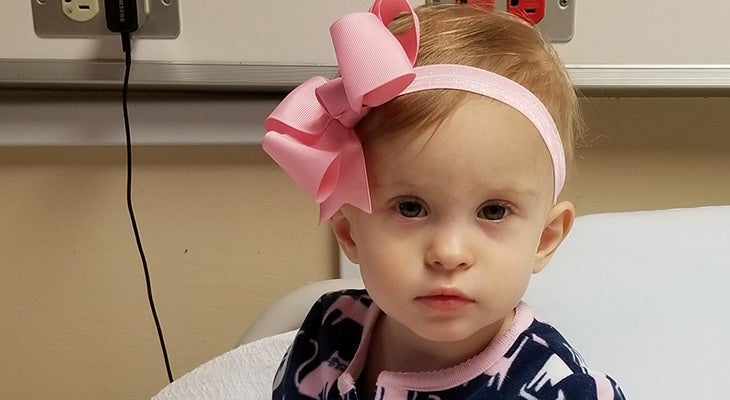 That’s the day their 18-month-old daughter, Emaleigh, had a computed tomography (CT) scan that threw the family into a tailspin.

The Smiths had barely gotten home from the test when the doctor called. Emaleigh had a solid tumor in her chest, near vertebrae — hugging her aorta.

It was neuroblastoma, a cancer found mostly in children. It is formed from immature nerve cells, usually from the sympathetic nerve system or adrenal glands. Emaleigh needed to be admitted to Norton Children’s Hospital immediately.

The Smiths were in shock. Although Emaleigh was born with a heart murmur, she had thrived and was “full of spunk and personality,” according to her mom.

A routine chest X-ray in early April showed no major concern. Emaleigh was experiencing unexplained eating issues, including food aversion that started around 10 months of age and led to feeding therapy. That led her doctors and family to a fortunate decision: She would get a CT scan.

According to the American Cancer Society, loss of appetite is one symptom of neuroblastoma, along with bone or joint pain that may cause a limp; fatigue; or a lump in the abdomen, neck, or chest. Neuroblastoma and brain tumors are among the most common solid tumors found in children. About 800 children in the United States are diagnosed with it annually.

Neuroblastoma forms, sometimes before birth, from fetal nerve cells. Neuroblasts typically develop normally in a newborn, but sometimes they become cancerous. In infants, the neuroblastoma can turn benign as the body matures.

Neuroblastoma in a child Emaleigh’s age is particularly dangerous. It’s unlikely to mature to a benign state and could start spreading throughout the body.

An extra-long IV line for the active toddler

During the next six months Emaleigh spent a lot of time in and out of 7 West, the pediatric oncology unit at Norton Children’s Hospital that houses Norton Children’s Cancer Institute, affiliated with the University of Louisville. The goal was to shrink the tumor and prevent any spread.

Emaleigh underwent chemotherapy and eventually surgery. Andrea recalls that at one point she “totally lost it.”

She thought: How could this tiny, 17½-pound girl handle all of this?

Surprisingly well, as it turned out. Emaleigh never let anything keep her down. She played as usual. She was always excited to meet new people and would run up to hug them or shake their hands.

“We nicknamed her ‘The Mayor’ because she never met a stranger,” Andrea said.

During inpatient stays the nurses gave Emaleigh an extra-long IV line so she could be mobile. The active toddler often visited the nursing station and offices where everyone recognized her joyful babbling.

“The staff was wonderful. We became like family,” Andrea said.

In late May 2018, after two rounds of chemotherapy, tests showed that the cancer hadn’t spread to Emaleigh’s bone marrow. Since the tumor in the toddler’s chest hadn’t spread, surgical removal was a viable option.

Dr. Foley scheduled surgery for late June. He cautioned they might be able to remove only 85% of the tumor that was so near Emaleigh’s aorta and vertebrae. After the three-hour procedure he happily reported: They were able to get it all.

Emaleigh got four more rounds of chemotherapy to make sure her lymph nodes were clear of suspicious cells. Her last treatment was Sept. 17, 2018.

Follow-up scans brought the best news yet: Every test and tumor margin were clear.

September is Childhood Cancer Awareness Month. Help us light up our treatment areas with a donation for our shining stars, our patients. Funds raised benefit Norton Children’s Cancer Institute through the Norton Children’s Hospital Foundation.

A very low risk of recurrence

Emaleigh continues to do well. She still talks with everyone she meets. She enjoys her beloved collection of Minnie and Mickey Mouse toys, many of which came from people touched by her spirit. And, she adores her 4-month-old brother, Zachary.

“This is good news to be celebrated, but also a bit terrifying,” Andrea said.

The previous schedules, she explained, would have more quickly picked up any changes that could signal the tumor’s recurrence.

Kerry McGowan, M.D., hematologist/oncologist with UofL Physicians – Pediatric Cancer and Blood Disorders, told the Smiths that Emaleigh’s risk of recurrence is not zero, but is very low.

Still, Andrea has moments. If she sees Emaleigh limping, she wonders whether it’s just a sign of a busy day of playing or a symptom that the neuroblastoma has returned.

At times like this, Andrea reminds herself of the strength, compassion, kindness and hope that Emaleigh’s journey has inspired.

“She has a personality bigger than a star. She is happy and smart, and all the things she should be,” Andrea said. “That’s what I focus on.”