Kids with MIS-C responding to treatments, but long-term outlook for coronavirus-related condition unclear

Kids with MIS-C responding to treatments, but long-term outlook for coronavirus-related condition unclear

Children are responding well to anti-inflammatory treatments, and specialists will continue monitoring for long-term effects of multisystem inflammatory syndrome in children. 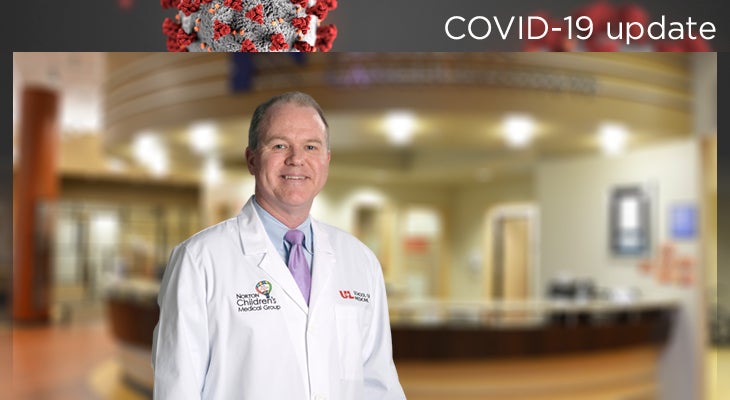 Kids with multisystem inflammatory syndrome in children (MIS-C) are recovering after treatments with anti-inflammatory drugs such as intravenous immunoglobulin and steroids, according to Brian J. Holland, M.D., chief of pediatric cardiology at Norton Children’s Heart Institute, affiliated with the UofL School of Medicine.

Children who’ve come to the Norton Children’s Pediatric MIS-C Multidisciplinary Clinic are recovering after being hospitalized with moderate to severe symptoms of MIS-C, typically running a high fever with inflammation involving multiple organs. All of the children had lab tests which showed that they had been previously infected with COVID-19, usually several weeks before they developed MIS-C. Some of the children had only mild symptoms at the time of the initial COVID-19 infection, and they seemed to recover for a few weeks before facing MIS-C.

“Several of the children who were hospitalized at Norton Children’s Hospital with MIS-C have been critically ill. They have needed to be placed on ventilators to help them breathe, and have needed strong medications through an IV to help their heart squeeze. The good news is that we have been able to support them, and they have responded to the anti-inflammatory medications, and by the time they left the hospital, all of them have had shown improvement in the organ function that we initially saw,” Dr. Holland said.

After a week or two, the kids are being rechecked, and the inflammation has gone away or is reduced and almost back to normal, according to Dr. Holland. In another month, the kids are showing completely normal lab results.

Follow-ups at six months or a year will show whether there’s been any long-term damage.

“In my area, specifically, with inflammation of the heart muscle, called myocarditis, there can be some long-term changes with scar tissue in the heart muscle after it’s been inflamed,” Dr. Holland said.

If you believe your child has symptoms of or has been exposed to COVID-19, call for assistance from a nurse.

“I want to make sure everyone, including parents and families and medical providers, is aware that this is possible and that it could happen a month after a child had their initial COVID-19 infection, even if the initial symptoms may not have been very significant,” Dr. Holland said. “If they have a kid who has really high fever, significant signs of inflammation and there isn’t another explanation, we want to make sure that everybody has this in mind. It’s a brand-new illness, and I don’t want to miss the chance to treat any of them.”