Middle schooler thriving after scare as a baby, now giving back

Middle schooler thriving after scare as a baby, now giving back

Ryan Shaps is donating the money he raised to Norton Children’s so kids can have more toys to play with while they are in the hospital. 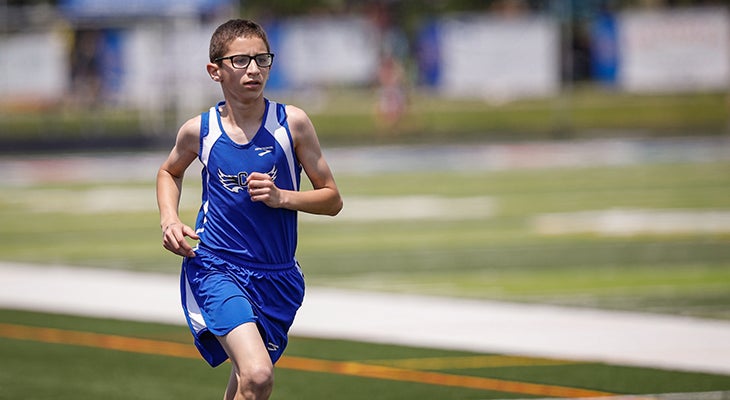 Kentucky Country Day School seventh grader Ryan Shaps raised $3,500 as a social action project for his bar mitzvah and through sponsors for the Norton Sports Health 10K he ran in September.

He is donating the money to Norton Children’s so kids can have more toys to play with while they are in the hospital.

Ryan is a former Norton Children’s Hospital patient. When he was a newborn, he contracted what his family thought was a cold. When he couldn’t breathe, respiratory syncytial virus (RSV) was suspected, and Ryan was rushed to the hospital, where doctors discovered he had bleeding in his lungs.

Ryan had something even more serious: idiopathic pulmonary hemorrhage of infancy.

His tiny body required invasive treatments, and he was put on a ventilator. He spent six days in the pediatric intensive care unit, followed by another six in a step-down unit.

“As a new mom with no medical training, I nearly put him back to bed, figuring he’d be fine in the morning. He would not have been,” said Shane Shaps, Ryan’s mom. “To all the parents who think, ‘He just has a cold; he’ll be fine,’ babies are too young for their little bodies to fight a virus.”

Today Ryan has no lasting effects from his health scare. In fact, his lungs are so strong he’s been an avid cross-country track runner for the past six years.

“All these kids want to do is go home, but since they can’t, I want to buy them stuff so they can feel at home while they’re in the hospital,” Ryan said. “The people at the hospital saved my life. If I can give back, that’s a win-win.”