On a hot, humid day in 2008, Michele Crockett received a call that no mom wants to get 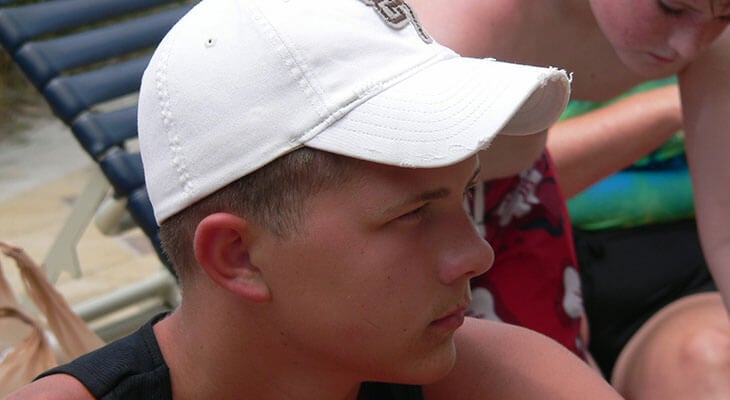 On Wednesday, Aug. 20, 2008, a hot and humid day, Max Gilpin’s mother, Michele Crockett, received a phone call just as she was leaving work to pick him up from football practice. The caller said her 15-year-old had passed out on the field and was not moving.

“I was not prepared for what I saw when I pulled up to the field,” she said. “Max was surrounded by coaches and his father. They had him propped up in a ‘gator’ type vehicle and placed ice packs  on his neck and groin area; they were pouring water over his body. His body was completely lifeless. His breathing was extremely labored.”

An ambulance arrived, and they were soon on their way to Norton Children’s Hospital. Max’s temperature was 107 degrees when he arrived at the emergency department. Staff worked quickly to cool his body. After several hours, Max was stable enough to be moved to the hospital’s “Just for Kids” Critical Care Center.

“A little while later the doctor came out to talk to us,” Crockett said. “She was excellent in explaining the injury. She told us that Max had suffered a massive heat stroke. She told us … his internal organs would most likely be compromised. She explained to us that they would not know the full extent of the damage for approximately 24 to 36 hours.”

By the following afternoon, Max was showing signs of improvement, a time his mom called “a very brief window of hope.” Within a few hours, his condition worsened.

“I stayed with him in his room that night. He was extremely restless and the nursing staff was always within an arm’s distance away. What a comfort to know they were right there at all times,” Crockett said.

Doctors continued treating Max over the next two days, but his condition continued to deteriorate. His last chance was a risky procedure called extracorporeal membrane oxygenation (ECMO), a heart-lung bypass machine that allows those organs to rest and give the kidneys and liver a chance to recover.

As she waited, Crockett realized she had another tough decision to make.

“I had to allow his younger sister and brother to visit him. I spoke to a staff member about my decision to have the kids come and visit Max. They put me in contact immediately with two young counselors on staff,” she said.

The counselors took a photograph of Crockett standing beside Max’s bed. The photo showed the ECMO machine and large tubes going into and out of Max’s neck and thigh. Crockett was relieved to have a way to prepare her younger children to see their brother in this condition.

By Saturday morning, the family’s hope for Max’s recovery had diminished. Even with continued intervention, his condition was not improving.

“By that evening we were preparing our goodbyes,” Crockett said. “The staff was very attentive to our needs. We were all able to stay with Max until the end, doctors and nurses included. They had become extended family over those four days. I knew they had exhausted all of their resources to save my son and were feeling the loss too…. I am so grateful for the level of care and compassion we received from Norton Children’s Hospital.”