Bradley Wilson calls it ‘miraculous’ that he survived childhood leukemia. Now he wants to help save lives. 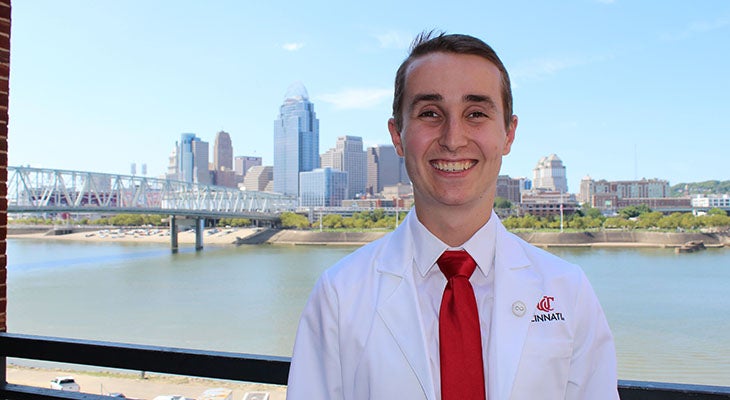 In the weeks leading up to Saturday, Aug. 29, 2009, 13-year-old Bradley Wilson was feeling sick. He’d gone to his pediatrician and was told that it was just a virus. Friday night, Aug. 28, he was as sick as he’d ever felt in his entire life. His parents realized that something was really wrong; Bradley couldn’t walk, was going in and out of consciousness and his skin was turning gray. His parents took him to the Norton Children’s Hospital emergency department, and in the early hours of Aug. 29, his life changed forever. Bradley had a childhood cancer, leukemia. What came next would lead him to what he describes as “his calling.”

In the hospital emergency department, providers were asking him questions and hooking him up to monitoring devices. He lost consciousness.

“It was miraculous that I even survived,” he said. “I had contracted a staph infection which my body couldn’t fight because I had no immune system, due to the leukemia. The infection had gotten into the blood and spread throughout the body, and I became septic.”

He had no heartbeat for 20-plus minutes. In K. Kim, M.D., emergency medicine physician at Norton Children’s Hospital and UofL Physicians – Pediatric Emergency Medicine, and others stabilized Bradley and moved him to the “Just for Kids” Critical Care Center (pediatric intensive care unit). He was in a coma for several days and spent a few weeks in the PICU. He was on a ventilator, feeding tube and dialysis. Luckily, he had no brain damage.

As his recovery from the staph infection continued, that’s when Ashok B. Raj, M.D., hematologist/oncologist with Norton Children’s Cancer Institute, affiliated with the University of Louisville, came into the picture. Bradley began chemotherapy treatment immediately for the leukemia. He spent nearly three months in the Addison Jo Blair Cancer Care Center at Norton Children’s Hospital. The medical team worked to get Bradley stabilized and into remission.

From completing chemotherapy to unexpected relapse to college

Bradley went home from the hospital close to Thanksgiving in 2009. He ended up missing his eighth-grade year as he focused on his recovery and worked on physical therapy so he could walk again. He entered high school as planned, and continued with monthly outpatient chemotherapy. He finished chemo in January 2013. In October 2013, his senior year, he began to notice some vision problems. He had experienced a cancer relapse in his spinal column, which increased pressure in his skull and pushed on his optic nerve. He had to undergo a month of cranial radiation and a couple years of chemotherapy. He attended about 40% of his senior year and delayed going to the University of Kentucky for a year.

He went into remission and completed chemotherapy in May 2016.

“My health is great now,” Bradley said. “I have experienced some late effects, such as avascular necrosis, which causes blood loss to certain parts of the body. I had two total hip replacements in college due to the necrosis causing my femur heads to collapse.”

While at the University of Kentucky, Bradley volunteered his time to help other children and teens going through similar experiences to his. For three years, he would spend a couple hours a week hanging out with kids going through outpatient cancer treatment at a hematology/oncology clinic.

“I’d play Xbox, build Legos, just anything to help and make time fly for them,” Bradley said. “I wanted to make people feel loved and that they’re not alone, that there are people who care about them and want to help get them through it, even if it just brightens their day a little bit. It goes a long way.”

He would also host parties and events through a student-run organization. While hosting pediatric cancer patients and families at a UK soccer game, he had the opportunity to help a family by just being himself.

“Their son had been diagnosed a few months earlier at the same age I was diagnosed, with the same diagnosis, and we had very similar backgrounds,” Bradley said. “I felt like I connected with them; it was cool that I had been through a very similar experience, and his mom looked at me and said, ‘You’re doing so well,’ and began cheering up. It was powerful for me to feel like I can be someone to look to that can say, ‘This is winnable, there’s hope.’ Because those days are really hard when you’re in the middle of it, and there’s so much to do, and it can be overwhelming. It was nice to represent the light that can be at the end of the tunnel.”

Bradley graduated with a degree in chemical engineering in May 2019. He is in his first year of medical school at the University of Cincinnati.

Medical school “has always been on my mind,” he said. “It’s a world I’ve spent a lot of time in on the patient side. Given the way I’ve been helped by medicine, I’ve developed a passion for people who are facing serious illness. It was the perfect fit for me. It’s what I get excited about, it’s what I’ve been called to do. I feel like I can make a difference in a way that is very unique.”

As a self-proclaimed people person, he enjoys the combination of scientific problem-solving and working with others that medicine provides. He will soon begin a longitudinal primary care clerkship, where he will spend four to five hours with an internal medicine/pediatrics physician every week. He hopes to learn if the experience will reaffirm his feelings about pursuing work with pediatrics. He believes that even if he pursues a specialty that treats adults, he imagines he would treat both adults and children. He admits that there’s still a lot of time for change.

He acknowledges that there is a long journey ahead of him –– medical school, residency, fellowship. The same positive outlook that served him during his treatment is helping him through his medical education.

“I’m excited to get into clinic, excited for the day where I feel confident in what I’m doing –– I know it will be a long road filled with trial and failure and learning from experience. I would say I’m most looking forward to having the knowledge and the experience it takes to make a positive difference in people’s lives and to be able to do that for a career is going to be pretty incredible.”