Sadie Heath was born with several congenital brain malformations, as well as hydrocephalus. Learn how she beat the odds. 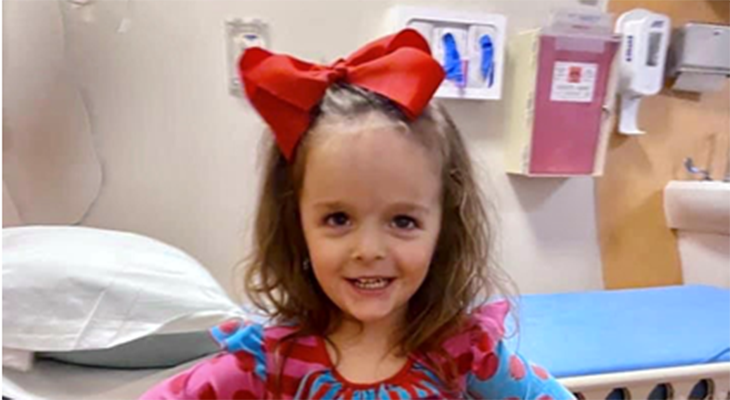 The first time Sadie Heath won a pageant, mom Britney Heath sat with tears in her eyes. The tears weren’t celebrating the win; she cried because Sadie was participating. It was an image Britney never thought she’d see. Sadie was born with hydrocephalus, along with multiple congenital brain malformations. Today, at age 4, she participates in pageants and cheerleading, and loves being a girly girl –– much to her mother’s delight and the awe of the physicians who care for her.

In October 2015, Britney went in for a routine pregnancy ultrasound at about 35 weeks with her OB/GYN in Paducah, Kentucky. According to Britney, it had been the “perfect pregnancy” up to that point; all of her ultrasounds had shown no issues.

“I just remember sitting there scared to death because I could tell something was wrong,” Britney said. “They teleconferenced in a specialist from Norton Children’s. They saw an abnormality in Sadie’s brain on the ultrasound. They suspected that she may have had a stroke in utero.”

Britney immediately traveled to Norton Hospital in Louisville, where she would be on bed rest for the final leg of her pregnancy. Specialists with Norton Children’s would monitor Sadie before birth.

Specialists did blood tests and scans, and monitored the “water spaces,” or hydrocephalus, that Sadie was experiencing in her brain. Hydrocephalus is a condition where cerebrospinal fluid (CSF) — “water” — accumulates in the brain, causing increased pressure. The water spaces were becoming bigger, to the point where the specialists recommended that Britney deliver.

Sadie was whisked across a pedway to the neonatal intensive care unit (NICU) at Norton Children’s Hospital soon after birth. The next week in the NICU included more testing and monitoring.

Thomas M. Moriarty, M.D., Ph.D., pediatric neurosurgeon with Norton Children’s Neuroscience Institute, affiliated with the UofL School of Medicine, came in with Sadie’s full care team and explained that there wasn’t any part of Sadie’s brain that had developed as it should. There were parts of her brain that were missing. In addition to the hydrocephalus, her full diagnosis included these rare, congenital brain malformations:

“The world kind of stopped at that point,” Britney said. “I remember looking at her and thinking, ‘That can’t be possible, she’s perfect.’ Because of her diagnosis, the doctors told us

it was likely that she’d have developmental delays and serious health issues, such as seizures.

“We started looking at the side effects and outcomes … I went through a grieving process. She was just a baby, but I was grieving for the things I wouldn’t get to do with her. It was the hardest week of our lives.”

After her brief grieving process, Britney was resolute. She realized she had nothing to grieve about; she was going to give Sadie the best life possible, providing her every opportunity she could find. Britney made the decision to be public and open about her experiences with Sadie on social media.

According to Britney, the entire Western Kentucky community of Benton, where she and Sadie live, rallied around them. Community members made “Sadie Strong” shirts, sending letters and praying for her health.

Sadie went home from the NICU at a week old. According to Britney, Sadie’s doctors, including Darren M. Farber, D.O., pediatric neurologist with Norton Children’s Neuroscience Institute, cautioned that Sadie likely would start having seizures that may or may not be controlled by medicine.

“We were prepared and ready for that,” Britney said. “But she never started having seizures.”

At 3 months old, Sadie began going to physical and occupational therapy four times a week, working on head and neck control as well as muscle control. She was starting to show some developmental delays.

“Every time we would go to an appointment, they would say she was a little behind on something,” Britney said. “But by the next appointment, she’d catch up. She never stayed delayed for very long.”

By the time she was 1 1/2, according to Britney, Sadie was fine.

“She was keeping up with everybody,” Britney said. “They discharged her from therapy. We would take her for evaluations and people would think they had the wrong child. Every time we would come to Louisville to see her neurologists, they would be blown away; nobody could explain it.”

Then, the hydrocephalus increased again.

Shunt surgery for hydrocephalus and an interhemispheric cyst

Dr. Moriarty suggested surgery to place a shunt to relieve pressure on the brain caused by the hydrocephalus. A shunt is a small tube that allows the excess CSF to leave the brain and go someplace else in the body to be reabsorbed. Often, it’s routed to the abdominal cavity. This type of shunt is called a ventriculoperitoneal shunt.

“Dr. Moriarty is unbelievable. There is no one else that we would trust with our child,” Britney said. “I’ll never forget when they got ready to take her back for her surgery, somebody asked him ‘Is there anything special about this one?’ I know they meant it from a medical standpoint, but Dr. Moriarty said, ‘Everything about this little girl is special.’ And knowing that you have a doctor who sees so much and deals with so many people, and genuinely cares and recognizes that a child is special, as a mom, it gives you a peace. If there’s any peace you can have when your child is about to have brain surgery, it’s that kind of care and compassion that makes all the difference.”

Sadie recovered well after the shunt placement. She continued on with her neurological care, being routinely monitored with little to no complications.

Then in November 2019, Britney and Sadie went to Louisville for a routine magnetic resonance imaging (MRI) scan. The scan showed the hydrocephalus had increased so much that emergency surgery might be necessary. However, Sadie had shown no signs or symptoms that anything was out of the ordinary. Dr. Moriarty cleared them to go home for the weekend, with the expectation Sadie would have surgery the following Monday morning.

The whole family drove to Louisville for the scheduled surgery: Sadie’s parents, both sets of grandparents and faith leaders in their church, all ready to support Sadie.

Dr. Moriarty scheduled a computed tomography (CT) scan the morning of the surgery. The results were a welcome surprise. Britney and the family learned from Dr. Moriarty that the fluid had decreased. Sadie didn’t need surgery and could go home.

“This is just the kind of ride we’ve been on with Sadie,” Britney said. “Everything that wasn’t supposed to happen has happened; everything that was supposed to happen hasn’t, and it’s amazing. Norton Children’s has been the place where we’ve been able to see God work miracles. God has used the doctors, nurses and staff to be our comfort and sense of peace during this. It’s been amazing.”

The neurological care she needs closer to home

Britney and Sadie’s father were making the more than three-hour drive from Benton to Louisville constantly for all of the care that Sadie needed when she was younger.

“She had so many follow-up appointments. Neonatology, neurology; she needed tubes put in her ears. It was stressful travelling with a baby on those long car rides, not to mention time-consuming and taxing financially.”

“I sleep so much better at night to know that we have that close by,” Britney said. “To know that there is someone here who has trained with them, who knows all the same information, has access to her doctors in Louisville, it’s been a game-changer.”

Sadie started jerking when falling asleep at around 3 years old. Britney was bothered by the development, due to the likelihood Sadie could develop seizures. She worked with Kristen Riley, APRN, nurse practitioner with the outpatient center, to send video of Sadie’s movement. Kristen consulted with Dr. Farber, who decided it was normal and associated with sleep.

“That was huge,” Britney said. “It kept us from going for a sleep study and another trip to Louisville.”

Looking to the future

Sadie will be 5 in October. She competes in pageants and is on a cheerleading team. She’s still never had a seizure and experiences no delays.

“If everything changes tomorrow and she does start having symptoms or complications, we are so confident in where we are with her doctors and her care; we’re just blessed to be on this ride with her,” Britney said.