Helping kids with cancer find a new purpose in music

Helping kids with cancer find a new purpose in music

Through the Cancer Beats program, kids collaborate with local musicians to produce songs that celebrate the strength of each person’s cancer journey. 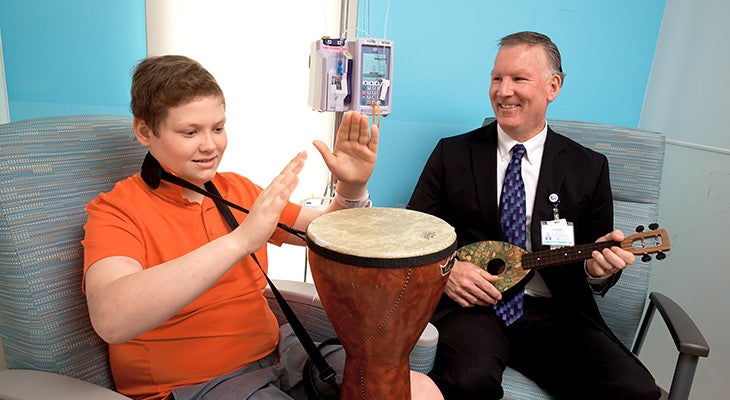 Medical Group and physician-in-chief for Norton Cancer Institute. Yet, he admits to having butterflies last May as he stood backstage with his guitar at Chili’s® Clip for Kids. He was excited — yet also a bit terrified — to perform with a group of young cancer patients and gifted music therapists at Fourth Street Live!

“I was nervous about playing with people who have real talent, but it was a joyful day. I’m grateful I had the chance to be part of it,” he said.

That concert included songs created by young patients of Norton Children’s Cancer Institute, affiliated with the University of Louisville. Through the Cancer Beats program, the youth collaborated with local musicians to produce songs that celebrate the strength of each person’s cancer journey.

Cancer Beats takes music therapy for teens and young adults to the next level. It launched in 2018 with support from Teen Cancer America, an organization started by Roger Daltrey and Pete Townshend (of The Who) to transform cancer care for young people.

“It’s a great example of how the right model built on compassion makes a profound difference for those we serve,” he said.

Why is philanthropy a personal priority for Dr. Flynn?

He finds inspiration from riding in Bike to Beat Cancer, working on program grants and making time in his jam-packed schedule to join young music therapy patients in decorating ukuleles.

“Selfishly, it brings me great joy,” he said with a laugh.

If you have musical talents you’d like to share, or you know a teen who could benefit from music therapy, let us know at NortonChildrens.com/Cancer-Beats

Dr. Flynn knows music therapy can improve emotional and physical well-being for those with cancer and other conditions. Research confirms this, but Dr. Flynn saw it at work firsthand years ago when his son was playing in a teen band.

One of his son’s friends was a star athlete. After losing a leg to bone cancer, the boy was devastated and felt his life was over until he began playing guitar with his friends in the band.