Heart surgery gives a boy his bounce back

Heart surgery gives a boy his bounce back 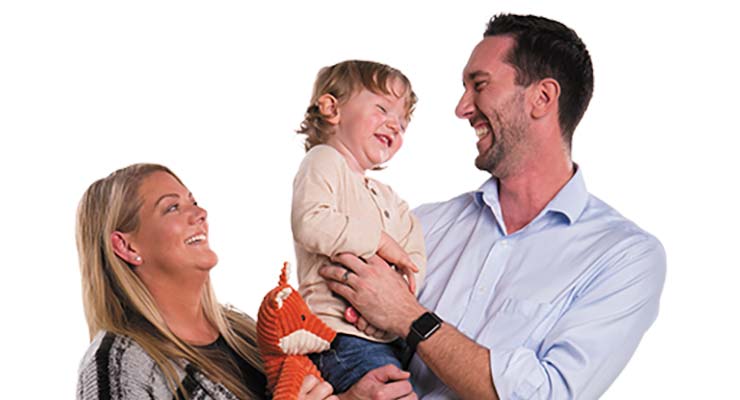 Vibrant and bouncing, Wells Whitaker is a ball of energy. The 2-year-old bundle of long golden curls and bright laughter seems to have an endless supply of energy.

His parents, Leslee and Matt, remember just months before, Wells was a very different toddler.

“He has two older siblings,” Matt said. “He would try to keep up, and basically his energy would drop off, and he would take a three-hour nap.”

Wells was born with a ventricular septal defect, or VSD, a congenital birth defect that causes a sizable hole in the lower chambers of a baby’s heart.

While pregnant, Leslee and her OB/GYN anticipated minor issues with Wells’ heart after spotting a small abnormality during a checkup. However, his diagnosis wasn’t confirmed until after he was born.

As Wells grew, his VSD was monitored closely, but it was apparent that something was not right. His heart began to swell and would beat faster than normal, as if he were running on a treadmill.

“At 15 months, he wouldn’t run around or play,” Leslee said, her voice breaking as she recalled uncertain moments — times when they were unsure whether their youngest child would have a normal life, or life at all.

“He just wanted someone to hold him all of the time,” she said. “He was always so tired. There was a point when we were very scared that it may be worse than what they had said.”

It quickly became evident that Wells would need heart surgery to repair the hole and his heart’s rhythm.

“I thought I would lose him. I felt so helpless, because there was nothing I could do but rely on the knowledge of the doctors and just trust them,” Matt said. “They gave me all the hope I needed.”

The words “open heart surgery” would make anyone nervous, especially the parents of such a small patient. On the day of the operation, Matt and Leslee hoped for the best and prepared for the worst: a large scar, lengthy recovery time and an exhausted baby who would be in pain.

“I was expecting six weeks of hell,” Leslee said. “It wasn’t that at all. When they say kids are resilient – boy – they weren’t kidding.”

Norton Children’s Heart Center is home to Kentucky’s only pediatric cardiovascular program. The Heart Center cares for hundreds of children for a number of conditions ranging from mild to severe and performs countless surgeries, like the one that repaired Wells’ heart.

While the surgery may have been routine to staff at Norton Children’s Hospital, Matt and Leslee were overwhelmingly surprised by not only the speed of recovery, but also the amount of compassion and attentiveness they received.

“They provided outstanding care,” Matt said. “His nurse, Hannah, stayed by his bedside what seemed like 24/7.”

“She went over every wire, every monitor, over and over again,” Leslee added.

Wells was discharged after only four days — a day earlier than planned after his cardiothoracic surgeon, Erle H. Austin III, M.D., with University of Louisville Physicians, discovered him running and playing in the recovery room.

“Once he healed, he was a completely different boy!” Leslee said, balancing a wiggling Wells on her knee. “They told us, ‘You have no idea how much energy he may have,’ and they were right. It’s a night-and-day difference.”

Just a week after being home, he was already running around with the kids.

Wells’ surgery to repair his heart was Matt and Leslee’s first encounter with the newly named Norton Children’s Hospital, but they found themselves in the company of families drawn close by the experience of personalized service and compassionate care from the oldest pediatric hospital in Kentucky.

“As far as working with a medical staff, they are totally dedicated to your child’s wellness,” Leslee said. “I can’t imagine getting the care anywhere else.”

“The hospital goes above and beyond for the health care of its patients,” Matt said.