Several groups have given generously to hospitalized kids this holiday season 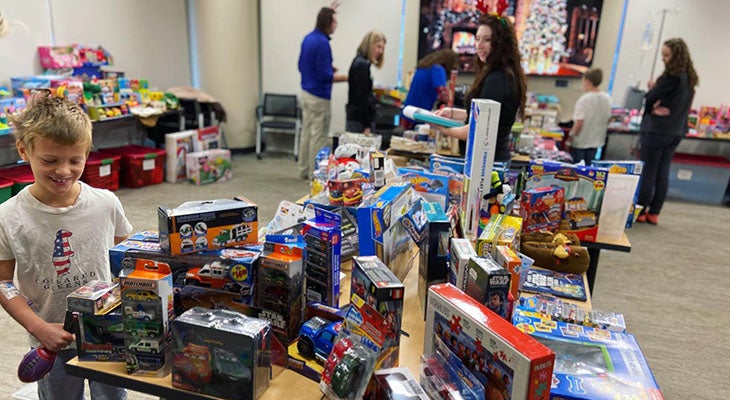 Norton Children’s Hospital is extraordinarily grateful for our donors and volunteers who embody the holiday season’s spirit of giving. Their abundant generosity provides countless gifts for patients and families who are away from the comforts of home at the holidays. Their kindness provides hope and helps to sprinkle some cheer at the hospital at a much needed time.

Nick’s Helpers
Nick’s Helpers made a special delivery from Smith Mills, Kentucky, to deliver toys for all the children at Norton Children’s Hospital. Nick’s Helpers formed in memory of Nick Kellen, who passed away in 2012. His family carries on this tradition in his memory.

Brian Napier & family and Aric Green
Brian Napier, his family and Aric Green donated four Radio Flyer wagons to Norton Children’s Hospital. They raised over $500 for these wagons by hosting a Bourbon Trail poker run that started in Elizabethtown, Kentucky, and ended in Radcliff, Kentucky. Their children have been Norton Children’s patients, and they wanted to show their appreciation by giving back.

Bree’s Blessings
Bree’s Blessings brought gift bags for each child in the Addison Jo Blair Cancer Care Center (7 West) in memory of Bree Brown, a 7 West patient who lost her battle with Ewing sarcoma in 2018.

Bentley’s Battle
Bentley, a patient in the Addison Jo Blair Cancer Care Center, and his family joined us to bring toys for our patients, courtesy of Bentley’s Battle.

Hospital holiday decorating
The staff at Norton Children’s Hospital decorated the hospital units to bring cheer to patients and families.

Jonah
Former patient Jonah Bump and his amazing parents, Laurie and Brendon, dropped off over 570 pairs of pajamas as well as boxes of pillowcases and slipper socks. They had so many pajamas for our patients that they had to drop off three truck loads.

Jacob
Thank you, Jacob Regnier, for making 30 fleece tie blankets and donating books for the patients and families in the neonatal intensive care unit at Norton Children’s Hospital! These blankets are so needed and very much appreciated!

Gracie
A patient, Gracie Grober, collected and dropped off boxes of indoor snowball fight snowballs for the patients of 7 West. We love your generous heart, Gracie!

The second annual Cruisin’ for a Claus Hot Rod Toy Run was a perfect way to kick off the holiday season. Drivers of more than 100 cars came together Nov. 24 to form a parade to Norton Children’s Hospital, where over $8,000 worth of toys were donated. That’s double the amount collected last year!

Bluegrass Garrison of the 501stLegion and Aiden’s Legacy

On Dec. 3, Bluegrass Garrison of the 501stLegion and Aiden’s Legacy teamed up to provide patients with a magical, out-of-this world experience. Volunteers dressed in Star Wars costumes to take pictures and give out Harry Potter and Star Wars themed Legos. They also graciously donated $2,100 to Norton Children’s Hospital and even provided lunch for patients and their families.

Holiday toy drive
Norton Children’s Hospital’s Dec. 10 toy drive helped to brighten the season further. Schools, community groups and families worked together to drop off toys and warm hearts. Patients made sure that they didn’t miss out on the fun of giving that day. At Santa’s Secret Shop, they had the opportunity to pick out and wrap presents for their family and volunteers.

These gifts are priceless to patients and families at Norton Children’s Hospital. Thank you to everyone who has made a difference this holiday season. Please continue to open your hearts and to spread joy and cheer to all those in need of loving support.