No one watching Ethan play would know he had a heart transplant. 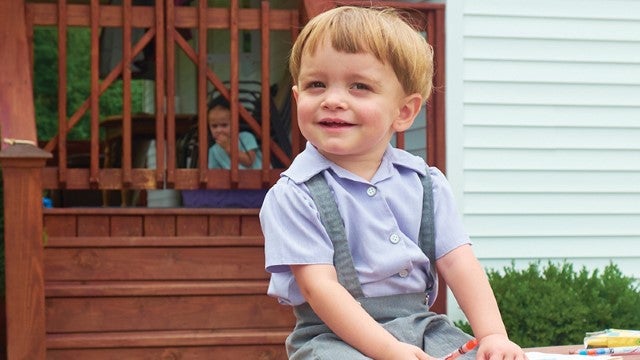 No one watching Ethan Byler play on the swing set with his sister, Emily, would point to the toddler and say, “He had a heart transplant.” They wouldn’t know that earlier this year Ethan became the first child in Kentucky to get a Berlin Heart. They’d never guess this external mechanical pump kept Ethan alive until he got a new heart on March 31, 2015. One week after his transplant, Ethan was healthy enough to be discharged. After a brief stay at the Ronald McDonald House in Louisville, he and his parents, Andrew and Elizabeth, returned to their rural Hart County, Kentucky, home on April 14. “That’s our wedding anniversary, so we had many reasons to have thankful hearts that day,” Elizabeth said.

A Miracle in the Making

Joshua Sparks, M.D., pediatric cardiologist with Norton Children’s Hospital and UofL Physicians, points to the support Ethan got from his mechanical heart pump for helping him go into his transplant operation in a relatively good state. “He was discharged postoperatively day seven, which is quite good,” Dr. Sparks said.

Ethan, who turned 2 in July, was only 7 months old when he was diagnosed with dilated cardiomyopathy (DCM), a condition in which the heart becomes enlarged and is unable to pump blood efficiently. Three-year-old Emily also has DCM. She is currently doing well on medications but may eventually need a heart transplant. Dr. Sparks explained that although cardiomyopathy is relatively rare, it’s the leading reason for heart transplants in children. Since up to 35 percent of DCM cases are inherited, electrocardiogram screening is recommended for all first-degree relatives of DCM patients. “Because of Emily’s history, we were able to diagnose Ethan before he had any symptoms,” Dr. Sparks said.

On a Sunday evening early last March, Elizabeth called Dr. Sparks to say Ethan’s skin felt clammy and he looked bad. He wasn’t eating and was breathing very hard and fast. Ethan was admitted to Norton Children’s Hospital, where he was started on intravenous medication and put on the heart transplant list. While hospitalized, Ethan caught what would have been a common cold for most kids but was life-threatening for him. He was put on a ventilator. His extremities grew very cold. He had little urine output. The pediatric cardiology team decided a mechanical heart pump was critical to keep Ethan’s vital organs functioning until a donor heart could be found.

The Berlin Heart was Ethan’s only option because of his small size. Unlike other pumps, which are implanted internally, the Berlin Heart is an external pump. Erle H. Austin III, M.D., pediatric cardiovascular surgeon with Norton Children’s Hospital and UofL Physicians – Cardiovascular and Thoracic Surgery, explained to the Bylers that Ethan’s preparation for the Berlin device would require surgery to insert a tube into his heart. “We were so scared, but he told us, ‘I’d be scared not to do this. It’s what Ethan needs,’” Elizabeth said, recalling how much Dr. Austin’s kindness meant to her. “Compassion is a big part of what we do in providing advanced care for our patients and their families,” said Dr. Austin, who also performed Ethan’s heart transplant surgery. Ethan’s family, who are progressive Amish, credit their faith and the incredible support of their community, family and medical team for seeing them through this difficult time. “Every day we heard so many people say, ‘We’re praying for you’ and knew they meant it,” Elizabeth said. “When all we could do was cry, Dr. Sparks would hug us and say, ‘It will be all right.’” By all accounts, Ethan is far more than “all right” these days. According to his mom, “he just goes, goes, goes!”

Dr. Sparks noted that beyond the need for ongoing medications and regular checkups, young heart transplant patients can lead reasonably active lives. “Our goal is for them to live a full, normal life and have the opportunity to do whatever they want,” he said. The Bylers feel incredibly blessed to know their children are getting the best care possible. “Our faith has grown stronger seeing so many people be part of making miracles happen,” Elizabeth said.