Godmother of the PICU

Godmother of the PICU 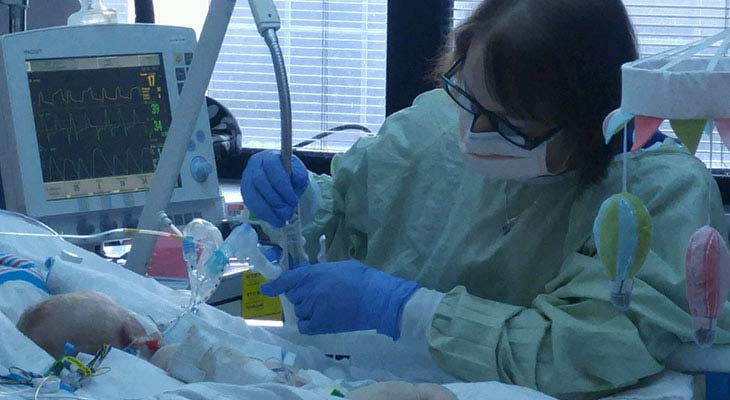 The year was 1972, but Joanie Strotman still remembers her first patient like it was yesterday. The little boy in her care was seizing and fading fast. The boy’s father became overwhelmed and passed out. Half his size, Strotman managed to catch the dad before he hit the floor.

“What on earth have I gotten myself into?” she thought at the time.

Strotman was still new to the world of nursing. After a brief stint in Norton Children’s burn unit and then as a float nurse, she decided to devote her career to helping the sickest of the sick. She took the night shift in the pediatric intensive care unit, or PICU.

She was the only one.

“Back then the PICU was just four beds and one room, about the size of a small kitchen,” Strotman said. “I could stand in the middle of the room and touch all four beds. There were heart monitors but very little other equipment. Very primitive compared to today.”

In the four decades since, she’s witnessed the evolution of health care. Over time, the four-bed PICU grew to seven. That number increased to 12 when the hospital opened in its current location in 1986. Today, the count stands at 34 in the unit now called the “Just for Kids” Critical Care Center. The nursing staff has grown too — one to two per shift then now exceeds 25.

And technology has changed dramatically. Strotman remembers a time before computers, when charting and medical records were completed with nothing but pencil and paper. Lab results could take a day (most now take 20 minutes). Most monitors were years from being invented, which meant symptoms and intuition were the main compasses of care.

But what impresses Strotman the most is the advancement of medicine and surgery. What was a sure death sentence 40 years ago is very much treatable today.

“With modern medicine, we can do so much,” she said. “Really, the only thing we could do for babies with heart conditions was to make them comfortable — surgical equipment was just too big to operate on anyone less than 20 pounds. Today, we’re doing open heart procedures on preemies weighing 3 or 4 pounds. At one time, many kids couldn’t be saved. Now, they can.”

While Strotman celebrates the victories, she also holds onto the losses. She’s lost track of how many funeral home visits she’s made to grieve with the families of kids who couldn’t be saved. When asked about those experiences, the joyful look in her eyes quickly disappeared. An expression of pain took its place.

“There was a baby I cared for who died 41 years ago, and I still talk to his parents today,” she said. “These kids — you take care of them day after day and they really start to feel like one of your own. For us nurses, it’s our loss too.”

Despite the trying times, Strotman keeps coming back, day after day, year after year. Her passion for helping families at their time of need makes it all worth it.

“I’ve met the most extraordinary people — from doctors and nurses to patients and families,” she said. “The love, the caring, the talent I see every day makes me realize why I’ve done this for 43 years.”

While Strotman admits she’s in the twilight of her career — retirement is two years away — she expects to help families in their time of need for years to come.

“I expected to be volunteering or something in the future,” she said. “There’s so much hope and love here, and I can’t imagine not being a part of it.”

We want to capture and share these memories throughout the year — to tell the real story about the passion, love and miracles that have made Norton Children’s the place it is today.

Click here to tell us your story. By completing the form you’ll be entered to win a chance for two to ride in the Norton Children’s Hospital hot air balloon. See rules here.