From 1 pound, 10 ounces to a thriving kindergartner

From 1 pound, 10 ounces to a thriving kindergartner

Born more than three months early, LeAnn was so fragile she couldn’t be held or even taken out of the incubator for a week, and her skin looked almost see-through, her mother recalled. 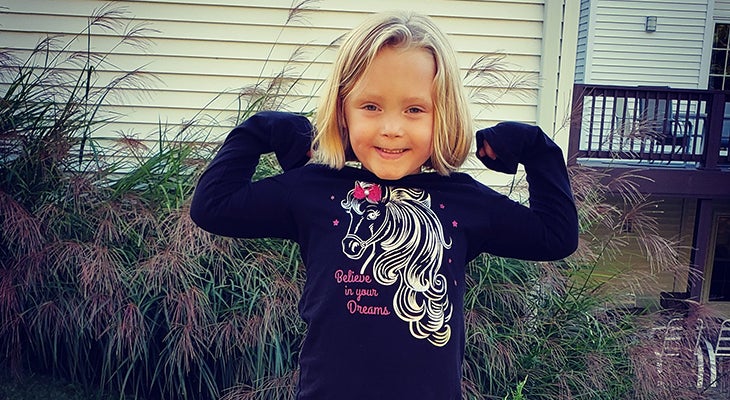 When Dana’s daughter, LeAnn, was born at 25 weeks, she weighed 1 pound, 10 ounces. Born more than three months early, LeAnn was so fragile she couldn’t be held or even taken out of the incubator for a week, and her skin looked almost see-through, her mother recalled.

The tiny baby’s mother was especially comforted to know a primary nurse had been assigned to LeAnn for each shift.

“Somebody is going to know your child and know their ins and outs. That gave us comfort when leaving her there to go home at night,” Dana said. After Dana’s two-week maternity leave ended, the engineer worked half-days in the office and finished her days working from the hospital to be closer to LeAnn.

When LeAnn developed a staph infection and later started experiencing acid reflux, the primary nurses were the ones who caught it each time, according to Dana.

LeAnn’s care team eventually recommended surgery to fix her acid reflux. The procedure — Nissen fundoplication — creates a new valve at the top of the stomach to reduce the chances stomach acids will back up into the esophagus.

LeAnn spent her first 103 days in the section of the NICU reserved for the babies needing the most attention.

During that time, LeAnn saw a cardiologist, pulmonologist, neonatologist, neurologist, gastroenterologist, surgeon, ophthalmologist, a nutritionist and a speech therapist, who helped with LeAnn’s suckling and swallowing for feeding.

“The coordination between all these different disciplines is amazing,” Dana said.

‘A fighter from day one’

Dana knew her first child was going to be a challenge. She had an incompetent cervix, meaning the cervical tissue is weak when it should be closed and firm. At 20 weeks, Dana went on bed rest. A week later, she was hospitalized in the antepartum unit at Norton Women’s & Children’s Hospital in St. Matthews.

Once she reached 24 weeks, Dana and family celebrated in her hospital room. The four weeks in the hospital had given her plenty of idle time to research, and she knew the milestone meant her daughter would have a 50-50 chance of survival. Dana then fought her way to 25 weeks, boosting LeAnn’s odds to 75%.

When Dana started having contractions, the NICU team was ready. They warned Dana her daughter most likely would not have enough lung function to scream at birth.

“She let out a little wail,” Dana recalled. “She was a fighter from day one.”

Dana and her husband, Carl, spent every evening at the hospital, so they could be there for the 7:30 p.m. weigh-in, marking their daughter’s slow but steady progress.

On New Year’s Eve, nurses placed a small crown and a noisemaker in the incubator. On Carl and Dana’s wedding anniversary, the nurses made a happy anniversary sign with LeAnn’s handprint and footprint.

“They were constantly doing things like that to show they cared not just about LeAnn, but our entire family, and that meant a lot to us,” Dana said.

After almost four months in the NICU, LeAnn went home. She still had a G-tube for feeding, which was removed when she was 17 months old. During her initial months at home, LeAnn’s cardiologist, pulmonologist and neonatologist closely followed LeAnn’s care.

LeAnn is now in kindergarten. Dana said her daughter is a polite, loveable chatterbox of a girl who likes gymnastics, swimming, Play-Doh and puzzles.