Between the two of them, they’ve had nearly 40 surgical procedures in the past two years. 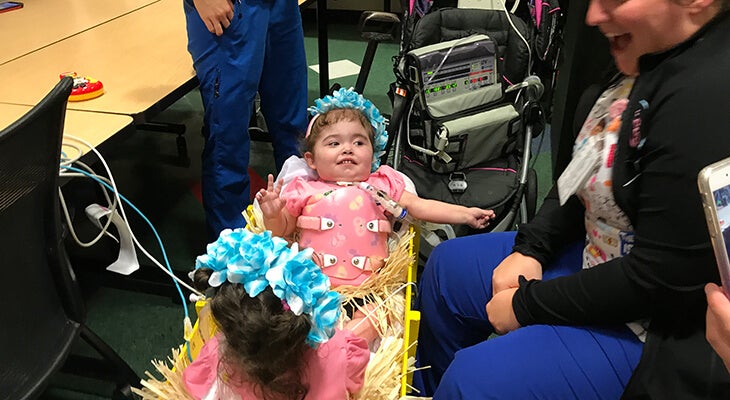 Twins Miracle and Journee Brooks celebrated their second birthday today at Norton Children’s Hospital surrounded by their extended family. “Extended” included not just biological family, but physicians, nurses, therapists and others who have helped them get to where they are today.

Two years ago, Miracle and Journee entered the world in a complex delivery at Norton Hospital due to the fact that their bodies were joined at the chest and abdominal cavity. Their livers were joined and they shared some of the same heart structures. They were immediately stabilized by a team from the Norton Children’s Hospital Level IV neonatal intensive care unit and put under the watchful eye of specialists from the University of Louisville who, with the rest of the team from the hospital, monitored them closely.

During those two years, they have faced many challenges. The first, on Nov. 11, 2015, when the girls were 7 weeks old, was an eight-hour separation surgery. The surgery was risky for both and involved more than 45 caregivers in the operating room alone. Since then, their “family” has grown to include hundreds of caregivers.

“That extremely complex surgery also meant a long road to recovery, and we were cautiously optimistic,” said Zaria C. Murrell, M.D., pediatric surgeon at Norton Children’s Hospital and UofL Physicians. “Throughout their stay with us, Miracle and Journee have done extremely well. I’m happy to report that Miracle has gone home and Journee should be discharged in the near future.”

Since the separation surgery, the girls have been under the care of experts in the hospital’s “Just for Kids” Critical Care Center. They currently are still on ventilators but have been getting stronger by the day. Between the two of them, they’ve had nearly 40 surgical procedures in the past two years.

“It’s not uncommon for conjoined twins to require many surgical procedures after an initial separation, especially when they’re joined in such a complex way,” Dr. Murrell said. “We expect they’ll be able to come off the ventilators and continue to thrive.”

“They really are miracle babies,” said the girls’ mother, Jasmine Brooks. “I don’t know what the future holds, but I’m looking forward to spending time with them out of the hospital. I’m thankful for everything Norton Children’s has done for us.”

According to the University of Maryland Medical Center, conjoined twins occur in approximately one out of 200,000 live births. Forty to 60 percent are stillborn, and about 35 percent survive only one day. The overall survival rate of conjoined twins is between 5 percent and 25 percent.