The word ‘flu’ is used for both influenza and the stomach bugs that can cause vomiting and diarrhea. Learn the differences between flu and stomach flu. 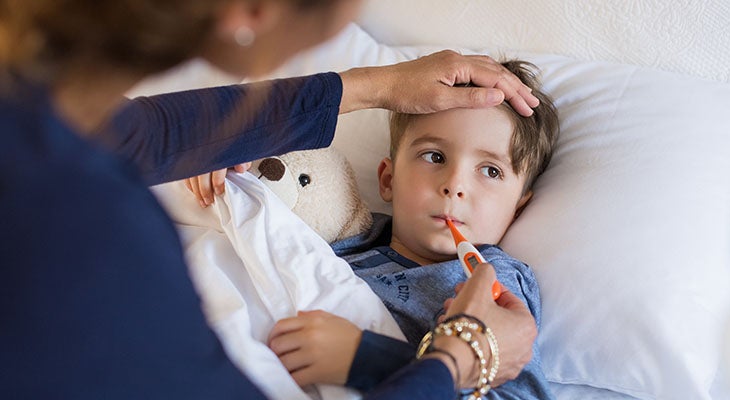 Flu is a word that is commonly used for influenza, an illness caused by a virus that causes symptoms in the nose, throat and lungs. Gastroenteritis, often called the “stomach flu,” is not the same virus that causes influenza. Learn the symptoms of both conditions to get your child the care they need.

What is stomach flu and how does it compare with the flu?

In children, nausea, vomiting and stomach pain are more common symptoms of gastroenteritis than influenza. However, those symptoms, including diarrhea, may appear in children with influenza, but not as often. The important thing to know is that if your child is experiencing vomiting and diarrhea but doesn’t have unrelenting fever, cough with body aches or other influenza symptoms, your child may have another virus, not influenza.

Children usually develop gastroenteritis or norovirus symptoms 12 to 48 hours after exposure. Children usually experience gastroenteritis symptoms for one to four days. The only treatment for stomach bugs is supportive care, including drinking plenty of fluids to prevent dehydration, getting extra rest and eating a diet that is easy on the stomach. Avoiding caffeinated drinks, dairy and sugary drinks may help if your child experiences diarrhea and vomiting.

Children with influenza, often called the flu, tend to have more upper respiratory symptoms that usually appear out of nowhere. In the first few days of being sick with the flu, a child’s symptoms are usually more intense.  Flu symptoms in children can include:

Flu symptoms in children can be treated with antiviral medication. If you think your child may have been exposed to the flu and/or develops a fever of 102 degrees for more than 24 hours, call your child’s pediatrician office to seek evaluation. Antivirals must be prescribed within 48 to 72 hours to be effective. This can help lessen the severity of the symptoms. The flu can be very serious in children — if your child has the flu and their symptoms worsen, it may warrant immediate medical care. Some of those symptoms include: