The role a father plays in child abuse prevention

The role a father plays in child abuse prevention

Studies consistently show a father’s involvement is associated with better outcomes for nearly every measure of a child’s well-being. Fathers also play a crucial role in child abuse prevention. 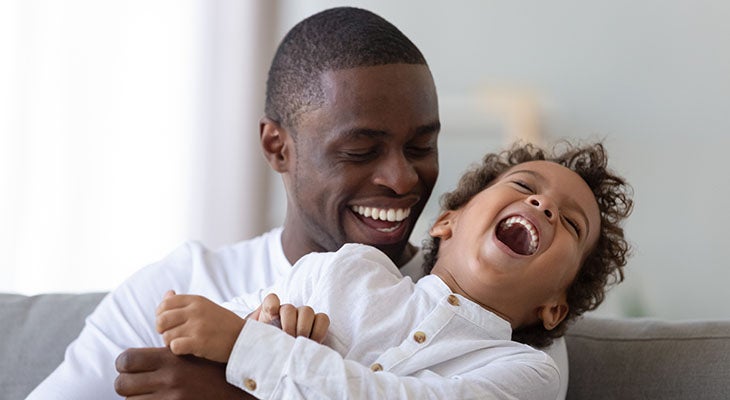 A child’s well-being is based on many social factors tied to their parents. According to David Cozart, director of the Lexington Leadership Foundation’s Fatherhood Initiative, a critical social factor influencing the health and well-being of children is their fathers. According to David, not only do fathers play a critical role in the healthy development of children, families and communities, they also play a crucial role in the prevention of child abuse.

“I believe father absence is a public health issue,” David said. “Our chances of enhancing child well-being and the human condition overall, I believe, are much better when we have two healthy adults engaged in the life of the child.”

Studies consistently show father involvement is associated with better outcomes for nearly every measure of a child’s well-being, according to the Child and Family Research Partnership. Healthy father involvement also can serve as a protective factor to strengthen families at risk for child abuse. Prevention programs have evolved from focusing solely on reducing risk factors to also building protective factors in families, such as the Fatherhood Initiative.

“Because if you know a child is going to spill milk at age 3, you don’t get upset about that,” David said. “If you do get upset about some of the things the children do, you now have skills for appropriate discipline and not the discipline that can lead to maltreatment.”

The U.S. Department of Health and Human Services Children’s Bureau “Child Maltreatment 2018” report states that 91.7% of child abuse cases in the United States are perpetrated by one or both parents. Nearly 40% of those cases involve mothers as the perpetrators, most often because of neglect. Father involvement helps reduce overall family stress and is correlated with lower rates of child neglect.

“Mothers are reported at higher rates because they’re the primary custodians. What we know is that when fathers are engaged, the stress of the mother is reduced,” David said. “An involved father can help relieve stress by being an equal co-parent. You have more adults or more agents that are able to bear the weight of the stress and responsibility. Any father advocate is a mother advocate, too.”

Studies show that when fathers take on early important parenting responsibilities and nurture infant children, the bond that develops serves as a protective factor against abuse. Even if a child’s parents live apart, a father’s presence can prevent abuse.

“The father is just going to be another protective factor as he’s engaged, along with his whole side of his family,” David said. “If mother of baby’s boyfriend knows dad is coming over every weekend and picking the babies up, I promise you daddy’s looking for a cigarette burn or a bruise or a welt and is asking mother of baby, ‘Who did this?’

“Even if the biological father’s role is marginal, it’s his weekend to get the baby. He goes, gets the baby, and he may not be paying a lot of attention at this stage. Who’s he going to take the baby to? ‘Mama, I got the baby this weekend. I’m gone.’ You don’t think paternal granny is looking baby over? So again, it’s that next set of eyes. It’s that accountability. It’s that safe placement if neglect is going on.”

In certain situations where the biological father may be absent from the mother, the acknowledgement of the father and the paternal side of the family can contribute to that child’s well-being.

“It’s not just the father or grandmother,” David said. “It’s a whole family tree of people who are willing to be a caregiver and help support emotionally and financially. When we disqualify the father and sever that relationship and its benefits, we sever the paternal family, too. Paternal grandparents, paternal aunts, uncles — there could be kinship care, could be viable placements for out-of-home care. Now we’re talking about reducing the number of children in the foster care and adoption system. We’re talking about a number of things that could help de-stress our stressed child and family services system.”

4 Your Child, University of Louisville

Commonwealth Center for Fathers and Families

David acknowledges that no one wakes up thinking they will abuse a child that day. There are many risk factors, from parents’ lack of understanding of child development and age-appropriate expectations to economic stress (poverty, unemployment), social isolation, poor parent-child relationships and family disorganization and violence. According to David, the COVID-19 pandemic is emerging many of these risk factors, and dealing with them head-on can help keep children safe.

“We talk about identifying stressors. Is the stressor ‘How am I going to be able to feed my children?’ Is the stressor that we’re all cooped in the house with little alone time? Reach out to resources that can help relieve that stress. Folks are providing care packages; there are food pantries. If you know the stressor is that lack of alone time, identify respite points for yourself where you can breathe for a minute. Doing things to help relieve that stress will help parents be at less risk to harm their children.”

“Many people may go to alcohol or other substances as a stress reliever during this time,” David said. “We should remind them or teach them that substances actually exacerbate stress, and they are not, in fact, helpful.”

As a proponent of healthy fathers and mothers, David believes that the promotion of healthy families is the best prevention for child abuse.