Family adopts to save baby with cancer

Family adopts to save baby with cancer

Every day is a gift for the White family, who adopted a baby to get her the help she needed. 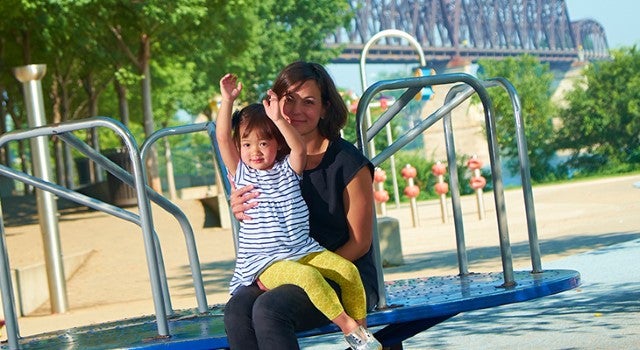 Hal and Shelly White have always taught their four children to be loving and Christian-minded, sharing their kind hearts with members of their community, church and school.

One Sunday in 2009, the White family attended church services that would ultimately change their lives. The sermon talked about orphans who were displaced in Haiti following the devastating earthquake that had occurred there that year. Daughter, Ryan, then 6 years old, was emotionally affected by the thought of children not having a family of their own and urged her parents to do something to help.

“At the time she wanted us to adopt one of the children from Haiti,” Hal said. “Shelly and I had never even considered adopting. We already had four healthy children and it was just not an option at the time.”

Hal and Shelly discovered an organization called Show Hope: A Movement to Care for Orphans, which advocates for adoption and raising money for families who want to take this step. Instead of adopting a child themselves, they encouraged Ryan to begin saving her money to support Show Hope’s mission of placing children from all over the world with loving, caring families.

Over the course of a year, Ryan saved $450. Because Shelly signed up for monthly prayer requests on Show Hope’s website, she received emails about children in need of adoption. In February 2013, she received an email about Mya, an infant living with stage 4 cancer in China.

“For some reason, Mya’s situation was so heartbreaking to me and I felt an intense calling to help,” Shelly said. “Our family prayed every day for Mya, but constant prayer just didn’t seem like enough for me.”

That’s when the thought of actually adopting Mya entered Hal and Shelly’s minds.

“Our family just felt a strong calling from God to take charge and get this little girl the care she desperately needed,” Shelly said.

Before they could sign the adoption papers, Hal and Shelly would need to find a hospital to assume Mya’s care. Hal reached out to personal friend Scott Watkins, system vice president and division chief operating officer for Norton Healthcare, who connected Hal with Stephen Wright, M.D., then medical director of Norton Children’s Hospital.

“Dr. Wright wholeheartedly gave the green light for Mya to be treated and cared for at Norton Children’s Hospital,” Hal said. “We were on cloud nine at that point and we knew we only had a short time to prepare for Mya’s arrival into the United States.”

On May 7, 2013, the White family received their special gift at the airport — Mya. Within two days, Mya began chemotherapy treatments at Norton Children’s Hospital.

The severity of Mya’s case was very rare. She was diagnosed with rhabdomyosarcoma, a cancer made up of cells that normally develop into skeletal muscles. This type of cancer can occur nearly anywhere in the body, and the most common sites include the head and neck, urinary and reproductive organs, arms and legs, and chest and abdomen. Mya’s cancer was considered an embryonal rhabdomyosarcoma, thought to originate from the urinary tract.

“Mya’s cancer was located throughout her pelvis and abdomen, and also affected her urinary and reproductive organs,” Shelly said.

Mya endured a long 10 months of intense chemotherapy and radiation treatments at Norton Children’s Hospital under the direction of Kerry McGowan, M.D., pediatric oncologist and hematologist with UofL Physicians – Pediatric Cancer and Blood Diseases, and Aaron C. Spalding, M.D., Ph.D., radiation oncologist with Norton Cancer Institute. After each round of therapy, Mya had to spend time in the hospital because of post-treatment side effects. While the treatments kept the cancer from spreading, it still remained in the lower portion of her abdomen and pelvis.

Dr. Spalding and Dr. McGowan realized chemotherapy and radiation weren’t going to kick Mya’s cancer. This is when a team of surgical specialists stepped in. Mary E. Fallat, M.D., chief of surgery at Norton Children’s Hospital and member of UofL Physicians – Pediatric Surgery, and S. Paige Hertweck, M.D., pediatric gynecologist with Norton Children’s Hospital Gynecology Specialists, met with the family to discuss a surgical approach to removing the cancer.

“Surgery was a possibility, but it was going to be very invasive and risky,” Shelly said. “The thing that impressed me was that Dr. Spalding and the other doctors joined forces on a regular basis to meet and discuss the best treatment for Mya. They literally went out of their way to work as a team, include us in the decision-making and allow us to ask questions. They were honest, upfront and I knew Mya was in great hands and the best place to get the help she needed.”

“The good news was that Mya’s cancer was confined to the pelvis,” Dr. Fallat said. “The disappointing news was that the tumor involved several of her vital organs and was really close to others, making it impossible to cure the disease with an extensive ‘en bloc’ resection [whereby an entire tumor and associated tissue is removed].”

“We had no other option at this point,” Shelly said.

Mya’s recovery from surgery was a long one. However, the operation proved to be successful, and Mya has now been cancer-free for 15 months. There are still many challenges that lay ahead, as the surgery altered the lower portion of her body in a very significant way, however the White family considers “every day as a gift.”

Currently, Mya has follow-up appointments with her doctor every four months and gets scanned to ensure the cancer has not returned.

“Mya is still as active as can be considering everything she’s gone through,” Hal said. “She runs, plays in the dirt, climbs things and acts just like a typical 2-year-old would.”