The story of Aadya Lincey, this year’s honoree for the 2019 Enterprise Golf Scramble Classic, began a few months prior to her birth. Her parents received a devastating diagnosis during an ultrasound. Their baby girl would be born with a heart condition called tetralogy of Fallot. The treatment for this condition is open heart surgery four to six months after birth. For the rest of the pregnancy, Aadya’s mom was closely monitored by maternal-fetal medicine doctors, a pediatric cardiologist and her obstetrician, who performed regular ultrasounds. For her parents, Aadya’s journey would be a wild ride full of surprises, triumphs and devastating setbacks. 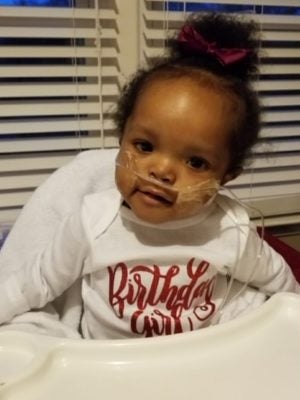 Aadya was born Dec. 27, 2017, and her parents fell instantly in love before Aadya was rushed to the neonatal intensive care unit (NICU) for monitoring and echocardiograms. She underwent her first procedure a few days afterward, as a stent was placed in her heart. After her oxygen numbers improved, she was released from the NICU to her loving family.

Aadya spent the next six months at home growing, learning and developing. She was full of life and had a contagious smile with bright, piercing eyes. Her parents knew she was a special child, and her journey that would follow proved just how unique she was.

On July 11, 2018, Aadya was admitted to Norton Children’s Hospital for heart repair surgery. Days later, however, specialists discovered that she had another heart condition called total anomalous pulmonary venous return. After surgery to repair the condition, Aadya would go on to have a third heart surgery and two bowel surgeries.

Aadya experienced several complications, including brain damage that occurred between surgeries. She was a favorite of many nurses and doctors, as she had an adorable personality and courageous spirit. She was released in October to go to a rehabilitation center, where she excelled tremendously. Aadya continued to astound the therapists and doctors with her amazing strength. After her father posted about her journey via Facebook, friends and family began to share her story across the country and beyond. Her story touched many, who showed love and support.

Unfortunately, Aadya needed a fourth heart surgery and was admitted to Norton Children’s Hospital in November. After recovery, Aadya was released on Christmas Eve, which was the best Christmas gift her parents could receive. Aadya thrived at home, once again making incredible recovery efforts. She loved watching “Moana” and “Sing” several times a day, playing with toys and dancing. In February 2019, however, Aadya became ill and was admitted to Norton Children’s Hospital, where she died Feb. 19.

After her death, her parents were overwhelmed by the amount of love and support from those following her journey. Far and wide, from Louisville to Germany, people knew of her inspirational story, as it was a testament to Aadya’s and her family’s endurance, strength and faith. Aadya had survived multiple surgeries before her first birthday. During her journey, Aadya was admired by many, especially two third-grade classes at Pelham Elementary in Pelham, Georgia, who showered her with cards and gifts. She also was the inspiration for the first shade of an up-and-coming cosmetic line with a lip gloss named Princess Aadya. She motivated many to keep striving, to keep the faith and to keep up the fight.