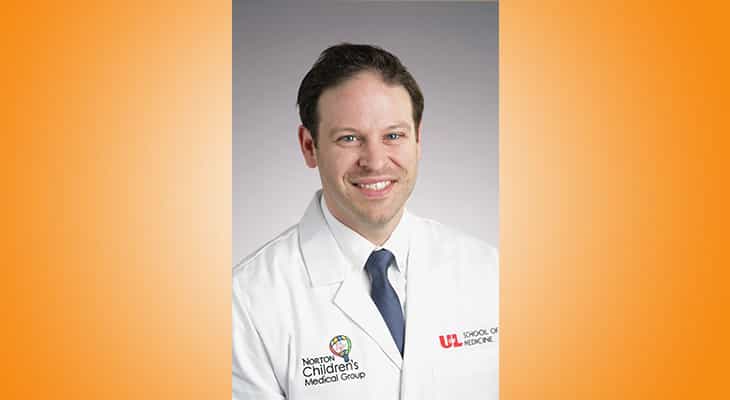 Matthew D. Kinney, M.D., pediatrician with Norton Children’s Medical Group – Novak Center, felt like medicine was his calling from a very young age. In his work as a primary care pediatrician, Dr. Kinney is passionate about early childhood development and the health disparities that exist, including those relating to infant mortality.

He knew he wanted to a pediatrician on ‘day one’

Growing up in a large family, Dr. Kinney was always surrounded by kids. That influenced his personality; he describes himself as not very formal and enjoys joking around. From a young age, he always had an affinity for science, but also felt an internal pull to help people. He felt pursuing medicine was the best way to combine those strengths. He attended medical school at the University of Louisville.

“If you asked me on day one of medical school, I would have said my preferred career path would be pediatrics,” Dr. Kinney said. “Luckily, I still felt that way on the last day of medical school, so there was no specialty choice drama for me! This likely has to do with family influence and personality. I enjoy joking around with the patients, so pediatrics works for me. It’s just a welcoming environment and enjoyable at every stage.”

Dr. Kinney completed his residency training in pediatrics at Northwestern University’s Feinberg School of Medicine and what is now the Ann & Robert H. Lurie Children’s Hospital of Chicago, Illinois. Following his residency, he worked in the emergency department for three years at the Cincinnati Children’s Hospital Medical Center in Ohio before returning to Louisville to follow his path as a primary care pediatrician.

“Though I learned a lot in my three years in the emergency department, it became very clear to me that primary care pediatrics is where I really wanted to be,” Dr. Kinney said.

Since 2014, Dr. Kinney has been a faculty member with the University of Louisville’s Department of Pediatrics as well as a pediatrician with Norton Children’s Medical Group – Novak Center. He also serves as the medical director at Open Arms Children’s Health clinic, a service of Home of the Innocents.

“A significant percentage of the [Open Arms] clinic’s patients are in foster care, residential care facilities, or are former refugees relatively new to the U.S.,” Dr. Kinney said. “Working with these patients can be quite rewarding. I can truly feel I am actively participating in directing these infants, children and adolescents back toward a lifetime of health, which is really at the heart of primary care for everyone.”

Dr. Kinney is now working on a project focused on infant mortality and ways to combat it via the Norton Provider Leadership Academy. The leadership academy, offered in conjunction with the American Association for Physician Leaders (AAPL), helps providers enhance skills for the future of health care.

“The infant mortality rate of West Louisville is shockingly high. It is more than two times the rest of the city, and for African American infants in these ZIP codes, it is more than 2.5 times the rest of the city,” Dr. Kinney said. “I can’t imagine why anyone wouldn’t be interested in combating this inequity. Nearly half of the [Norton Children’s Medical Group – Novak Center] clinic’s newborns come from the five ZIP codes served by Healthy Start, but we weren’t connecting our patients consistently with this amazing community resource,” Dr. Kinney said.

“It just made sense to strengthen our relationship with Healthy Start with an efficient referral process, thereby helping our patients’ families benefit from a resource designed for them and their health and safety.”

Promoting early childhood development is one of Dr. Kinney’s passions professionally and personally. He enjoys running the Reach Out and Read program at Open Arms, a program that provides books at well-child checkups to help promote brain development in young children. He notes that his most important role is being a husband and a self-proclaimed “girl dad” of two daughters.

“My wife, a physician, works mostly evenings and weekends, so I’m always with my girls,” Dr. Kinney said. “All the ‘dad’ things — that’s me now. Helping guide my daughters to be independent but kindhearted, strong and self-assured but empathetic women driven to make the world a better place is my passion.”

Dr. Kinney is focused on parenting his children in ways that he promotes to his patients.

“I know parenting is hard, but your child needs all of your efforts. This means that the child’s well-being should dictate most aspects of your life, including your schedule, your hobbies, your diet, your commitment to their health and safety,” Dr. Kinney said. “Even your willingness to make time to read to them every single night before bed can make a lifelong impact on your child’s verbal skills, success in school and adult life. Consistency and commitment will lead to better long-term outcomes.”