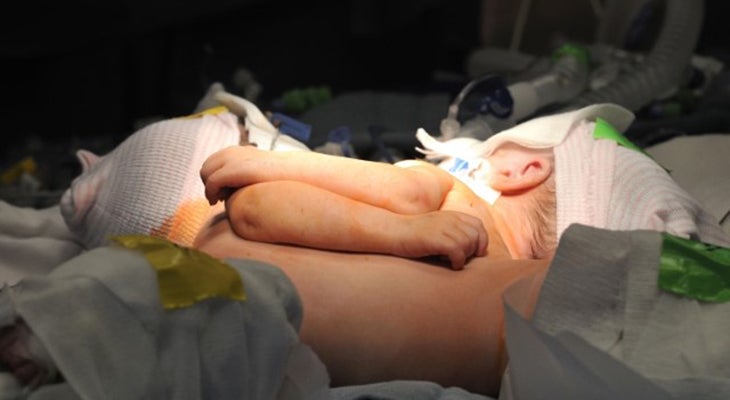 LOUISVILLE, Ky. (Nov. 19, 2015) – Specialists at Norton Children’s Hospital have announced they performed a surgery to separate 7-week-old conjoined twin girls on Nov. 11. Since the surgery, the girls have been under close watch of experts in the hospital’s “Just for Kids” Critical Care Center. They are currently still on ventilators but have been getting stronger by the day. Their long-term prognosis is not yet known, but indicators are favorable for continued improvement.

“In any situation where you have so complex a surgery, there is always a long road to recovery,” said Erle H. Austin III, M.D., chief of cardiovascular surgery at Norton Children’s Hospital and surgeon with University of Louisville Physicians. “We are cautiously optimistic, as one or both may require additional surgeries in the future.”

“God was definitely watching over the girls and the medical team on the day of the surgery,” said the babies’ mother. “We are so thankful to God and everyone at Norton Children’s Hospital for getting them this far.

“We are also thankful to the hospital chaplain, who prayed with us before the delivery and the day of the surgery.”

The twins were born at Norton Hospital and had been under close watch of UofL Physicians’ neonatologists in the Norton Children’s Hospital Level IV neonatal intensive care unit.

The twins were defined as thoraco-omphalopagus, which means their bodies were joined at the chest and abdominal cavity. Their livers were joined and they shared some of the same heart structures.

According to the University of Maryland Medical Center*, conjoined twins occur in approximately one out of 200,000 live births. Forty to 60 percent are stillborn, and about 35 percent survive only one day. The overall survival rate of conjoined twins is between 5 percent and 25 percent.

The surgical team waited as long as possible prior to performing the separation surgery. The decision to operate was made after the twins began to need increased breathing support. They also were not growing as they should. One of the infants was more fragile than the other, and survival was in question. The separation procedure was risky for both.

While originally expected to last about 12 hours, the procedure went smoothly and was completed in approximately eight hours. To prepare, the surgical team had undergone multiple drills using dolls.

A surgery to separate conjoined twins was last performed at Norton Children’s Hospital in 2001. In that case, the twins were conjoined at the heart. One twin did not make it through the surgery and the second died several months later.

No interviews with family or medical staff are available at this time.

About Norton Children’s Hospital
As Kentucky and Southern Indiana’s only full-service, free-standing pediatric hospital, Norton Children’s Hospital, along with its predecessor hospitals, have cared for children for more than a century without regard to their families’ ability to pay. The hospital also is an advocate for the health and well-being of all children. The 267-bed hospital is the region’s only Level I Pediatric Trauma Center and serves as the primary pediatric teaching facility for the University of Louisville School of Medicine. In 2007 and 2012, Norton Children’s Hospital received the prestigious Magnet designation recognizing excellence in nursing from the American Nurses Credentialing Center.