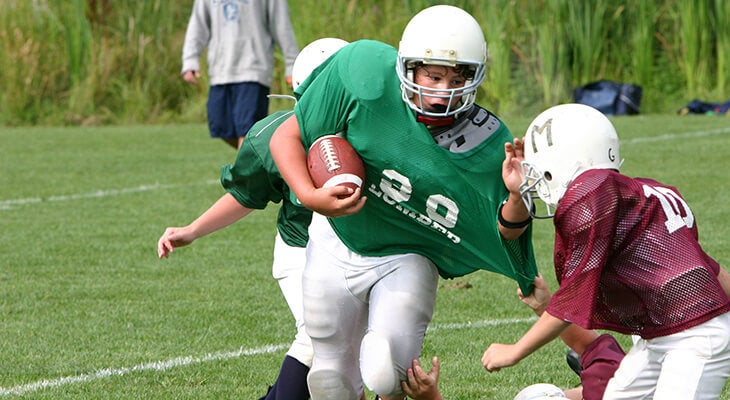 Youth football players represent 70 percent of all players in the United States. Yet, many studies have focused on measuring head impact in high school, college and professional athletes. Few studies on direct hits in youth football have emerged until now.

A study published in Journal of Neurosurgery: Pediatrics in October shows youth football players may take more high-impact hits to the head than researchers previously thought.

Virginia Polytechnic Institute and State University (Virginia Tech) researchers placed sensors on the helmets of 45 football players, ages 9 to 12, during 55 practice sessions and 14 games. They found that of the 7,590 recorded head impacts, 8 percent were considered high-impact.

High-impact hits were defined as being greater that 40 g. For comparison, that’s 40 times the speed of gravity; the record for the highest g-force on a roller coaster is 6.3.

The quarterback, running back and linebacker positions were the most likely to experience these high-impact hits to the head. The researchers also found that the incidence of these hits happened more during games than during practice. The study’s focus did not include any information on health outcomes of the youth players.

The Virginia Tech researchers said they hope the study brings a greater understanding of what causes concussions in children in order to help prevent injury.

What are signs that your child may have a concussion?

A family-friendly way to support Norton Children’s. Splash, run and walk your way through the course.

The Sports & Fitness Industry Association states the number of children ages 6 to 12 who play tackle football has gone down by nearly 20 percent, with total youth sports participation dropping.

Tad Seifert, M.D., director of the Norton Healthcare Sports Concussion Program and neurologist with Norton Neuroscience Institute, has been working with athletes of all ages with concussions for more than a decade.

Dr. Seifert said that despite concerns around head injuries and concussions, parents should weigh options before allowing their kids to play contact sports such as football.

“There are risks, but there’s a danger with inactivity and the obesity epidemic, too,” he said. “It’s a case of weighing the benefits versus the risks.”

Being able to spot the signs of a potential concussion is key to help protect children while playing contact sports.

“Properly identifying and treating concussions are keys to potentially avoiding more long-term, life-changing injuries,” Dr. Seifert said. “It’s really important that we educate everyone — from players and parents to coaches and athletic directors — on how to deal with and prevent concussions.”