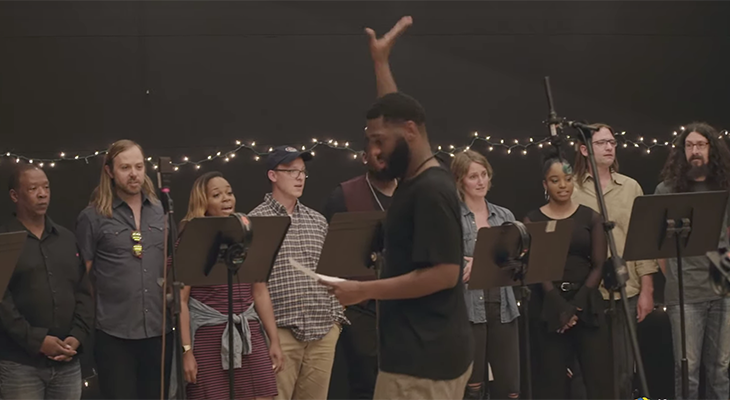 It’s unlikely Jim James was thinking of childhood cancer when he wrote the song “Victory Dance,” for My Morning Jacket’s 2011 record “Circuital.” The song, however, has become a rallying cry for the children and young adults undergoing treatment at Norton Children’s Cancer Institute, affiliated with the University of Louisville. With the musician’s permission, the Norton Children’s Cancer Institute’s Cancer Beats music therapy program, along with many prominent Louisville musicians, recorded a remix and music video of the song that captures the emotional journey of living with cancer.

Brian Schreck, a music therapist with Norton Children’s Cancer Institute, wanted to find a song to celebrate Cancer Beats, cancer patients and their journey. He brainstormed with the My Morning Jacket frontman about which song could be a match for all the feelings patients experience with treatment.

“I went through the My Morning Jacket catalog, and ‘Victory Dance’ kept coming back to me,” Brian said. “It’s not just a mantra, but a theme song for the program. We’re not looking so far down the road; we’re going to take a moment and focus on today and celebrate the tiny victories, whether it meant coming to the hospital to get your blood drawn, having chemo, doing a follow-up appointment — focusing on today’s victories.”

Jim provided the instrumental version of the song and his blessing to remix “Victory Dance,” and the Norton Children’s Cancer Institute therapists began working with musicians and patients to develop the new track –– and a music video. The remix, recorded at Louisville Public Media by Kojin Tashiro, includes Louisville musicians from several genres, including hip-hop, rock ’n’ roll, soul and R&B.

“I wanted it to feel like ‘We Are the World,’” Brian said. “Louisville is a strong place for music of all kinds. It’s also a diverse, strong community that can support our patients.”

The song starts with Jecorey “1200” Arthur, who composed and performs the first verse. The video also features two patient testimonials from former patients; Bree Brown, a Cancer Beats participant; and Lisa Banks, a breast cancer patient who passed away in April 2019. The final verse was written by musician and patient Golan Brown, who was unable to participate in the video physically before passing away in May 2018. Golan’s lyrics, found by his brother after he died, end the song and are sung by Greg Jamesse Brown and Yalonda JD Green.

Bree Brown was a positive person, bubbly and full of life, according to her mother, Jenni Brown.  She was talented in music and art even before a childhood cancer diagnosis of Ewing sarcoma in December 2015. She was treated at Norton Children’s Hospital for 10 months. She was in remission for 9 months, and experienced a relapse.

“She didn’t get into music therapy until she relapsed,” Jenni said.

“It was her tool that helped her through her relapse treatments. She used music as an outlet during that whole process,” Jenni said. “She would write songs to get her feelings out. Her ukulele went everywhere she went. Brett was a great sense of support for her, and honestly, I don’t think we could have gone through it without Brett. I don’t think he knows what an impact he’s made on our lives.”

Bree performed one of her original songs with Cancer Beats at Chili’s® Clip for Kids before learning she was terminally ill. Bree could play the ukulele and guitar, and was learning the keyboard at the time of her death in June 2018.

Bree’s testimonial in the music video was pulled from a video she had made prior to her death.

Cancer Beats is a program for adolescents and young adults with cancer that helps engage them in music experiences in the community. The program offers patients an enhanced approach to music therapy with the opportunity to learn new skills and coping strategies through music, meet peers and gain support, and express themselves creatively in a safe and controlled environment.

Cancer Beats is made available through support from the Norton Children’s Hospital Foundation and Teen Cancer America (founded by Roger Daltrey and Pete Townshend of The Who).

“That’s part of the reason that I love it so much,” Jenni said, referring to the “Victory Dance” remix. “They still included her in the song and it flows perfectly. It was like she was there when they made it.

“It’s very powerful, the first time I heard it I had chills. It’s not just about winning the fight — not all kids win the fight. it’s about living through it. It’s very dear to my heart. I love it — it gives a lot of hope to other kids and families who might be listening to it.”

After the song’s release, Jenni, along with friends and family, went to Bree’s grave to play the song for her. Jenni continues Bree’s love of art and music through Bree’s Blessings, an organization that provides gifts of art and music to pediatric cancer patients.

“I think music therapy is extremely important. Music is healing: It carries kids and families through the process,” Jenni said. “It’s a great support system and something people should support. The Cancer Beats program is equally as important. The most special thing about Cancer Beats is that the kids get together outside of the hospital, and they get to know each other outside of those walls. The families get to connect with one another to do something fun, that they all have in common, that isn’t cancer. Other hospitals don’t have anything like that, and it was a great help for Bree to get together with kids outside of the hospital and play music and not ever talk about treatment. The kiddos are together because they love music, and they’re all having fun.”

Finding victory and peace in music

Jana Robey noticed something different about a selfie she took of herself in November 2013. She had also experienced back pain, which she attributed to playing field hockey. Since then, she has lived with different forms of rare spinal cancer and brain cancer on and off for almost six years. Now 21, she continues to fight the brain cancer that has left her blind in one eye and unable to walk.

“We got here that morning, and I wasn’t feeling well; I had come in for another chemo. The videographer was there, and one of the ladies at the front desk said, ‘Come dance with me,’” Jana said. “So my mom pushed me in the wheelchair, and we were dancing together. It turned out really amazing — it was a cool thing to be a part of,” she said.

Cancer Beats is just one of many programs to help childhood cancer patients. Learn more about cancer care at Norton Children’s Cancer Institute, affiliated with the University of Louisville.

Jana is motivated in her treatment through her faith and music. She writes, sings, plays and records songs inspired by her faith, assisted by Norton Children’s Cancer Institute music therapists and leaders in her church. Since her diagnosis, she has grown in her faith, and writing songs helps her express her joys and frustrations.

“I didn’t process that I had cancer until the oncologist came in and told me, ‘You have cancer.’ From that time, I have had this weird sense of peace. I couldn’t explain it, except for that the Lord provided it for me. I’ve continued to have that peace, through this entire time,” Jana said. “I’m not saying I never get worried about things, but I know I’m going to be OK. It goes into that sense of victory –– through this all, I’ve had a peace about it. That’s my victory.

“I haven’t overcome the disease yet, but I know I will, even if it isn’t on this earth. I know that the Lord will heal me. It gives me joy and makes me want to dance. That’s what ‘Victory Dance’ means to me.”