Clayton Fackler experienced cardiac arrest that led to brain injury. Spasticity care from a variety of specialty providers helps with his movement. 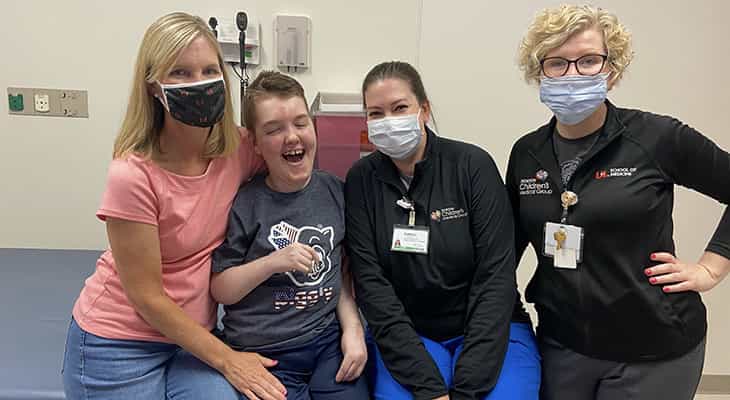 In October 2009, Clayton Fackler was “a pretty typical 3-year-old,” according to his mother, Susan Fackler. The family was outside playing when Clayton suddenly collapsed, going into cardiac arrest. From there, Clayton would begin a health journey that would include a brain injury that has caused a number of issues, including spasticity.

After Clayton collapsed, local EMTs took Clayton to a hospital in Corydon, Indiana, where he was stabilized. From there, Clayton was flown to Norton Children’s Hospital by the “Just for Kids” Transport Team via helicopter.

Among those who would treat Clayton in Louisville was Chris L. Johnsrude, M.D., a pediatric cardiologist with Norton Children’s Heart Institute, affiliated with the UofL School of Medicine.

“We were very blessed because the hospital had a heart rhythm specialist [Dr. Johnsrude] and good heart program,” Susan said. “We were exactly where we needed to be.”

It’s believed that Clayton’s outdoor play caused his heart to go into an irregular rhythm due to a condition called catecholaminergic polymorphic ventricular tachycardia (CPVT). A rare electrical condition of the heart, CPVT causes irregular heart rhythm, or arrhythmia, when a person exercises, becomes emotional or feels stressed.

Clayton would experience cardiac arrest a few more times and be placed in intensive care. He also was placed on the lifesaving therapy extracorporeal membrane oxygenation (ECMO). After a heart catheterization, the team learned that Clayton’s heart was structurally fine. Clayton was placed on beta blockers to help manage the heart arrhythmia he was experiencing. Clayton spent his fourth birthday at Norton Children’s Hospital, and was discharged to a rehab hospital in November 2009.

Because his heart stopped supplying blood to his brain, Clayton experienced a severe brain injury, according to his mother. Clayton is unable to speak, swallow or move his limbs. He requires a feeding tube. Without his brain being able to control his muscles, they began to contract and tighten, a disorder called spasticity. Normal muscle tone depends on signals from the brain. When the brain is damaged, these signals can be lost, and muscles then can become tight, making movement difficult. Clayton has required extensive orthopedic and neurological care for his muscle spasticity and related conditions.

Surgeries to help with spasticity, scoliosis

One tool is the very useful spasticity medication baclofen, a medicine that works at several spots in the central nervous system to relax spastic muscles. Baclofen can be an oral medicine, but because it can have side effects like sedation, it can be given only at relatively low doses. However, if baclofen is delivered directly into the spinal fluid by a pump system, it can work much better and without the side effects. With over a decade of experience placing these pumps, Ian S. Mutchnick, M.D., neurosurgeon and the head of the pediatric restorative neuroscience team at Norton Children’s Neuroscience Institute, affiliated with the UofL School of Medicine, inserted a baclofen pump for Clayton.

“That was pretty life-changing for Clay,” Susan said.

When spasticity pulled Clayton’s hip out of socket, he had surgery performed by Laura K. Jacks, M.D., pediatric orthopedic surgeon with Norton Children’s Orthopedics of Louisville, affiliated with the UofL School of Medicine. Also a part of the Norton Children’s spasticity team, Dr. Jacks has over 20 years’ experience managing kids with complicated muscle tone issues.

Clayton’s condition also caused severe scoliosis to develop. Due to the severity of his spinal curve, he required surgery. According to Susan, Rolando M. Puno, M.D., orthopedic spine surgeon with Norton Leatherman Spine, along with Dr. Mutchnick, performed surgery on Clayton to reconstruct his spine with rods from the bottom of his back to the top. During that surgery, Dr. Mutchnick monitored Clayton’s baclofen pump.

“We were nervous about that surgery, but it ended up being the best thing,” Susan said. “After that, Clay could sit up, which before, it was painful for him.”

According to Susan, muscle tone remains an issue for Clayton. Clayton works with Catherine Schuster, M.D., pediatric physical medicine and rehabilitation physician with Norton Children’s Physical Medicine & Rehabilitation, affiliated with UofL School of Medicine, and its care team to administer and monitor the baclofen pump.

“She helps us make sure the baclofen pump is working,” Susan said. “She checks [Clay’s] range of motion and talks with us about whether we need to increase his dosage or stay at the same, and then they refill it.”

“They do Botox injections every three months to try to get him to loosen his muscle tone some,” Susan said. “Of all of Clayton’s providers, we see the physical medicine team the most because we’re with them every seven to eight weeks. They’re all super helpful to us when we’re trying to manage issues with his pump.”

It is important to work with an experienced pediatric spasticity team if you are considering a baclofen pump for your child. Children with brain injuries severe enough to cause spasticity often have immune systems that can be somewhat weakened, and can have conditions that need to be identified and corrected before a pump is placed. The Norton Children’s spasticity team works together closely to make sure that the right patients get the pumps, that they go in safely and are carefully managed and, if issues arise, the issue is solved quickly.

Clay is now a teenager attending school several days a week. He still cannot speak, but is working on an eye communication device, according to Susan, and he expresses himself through his facial expressions — smiling, laughing, crying or screaming at times.

“Clay has a lot of fans and a big family,” Susan said. “Support from your family, your community, and any resource you can get makes all the difference.”