Child thrives after retinopathy of prematurity and NICU stay

Child thrives after retinopathy of prematurity and NICU stay

Liam Rogers had an 126-day stay in the neonatal intensive care unit (NICU) that included surgery for retinopathy of prematurity. 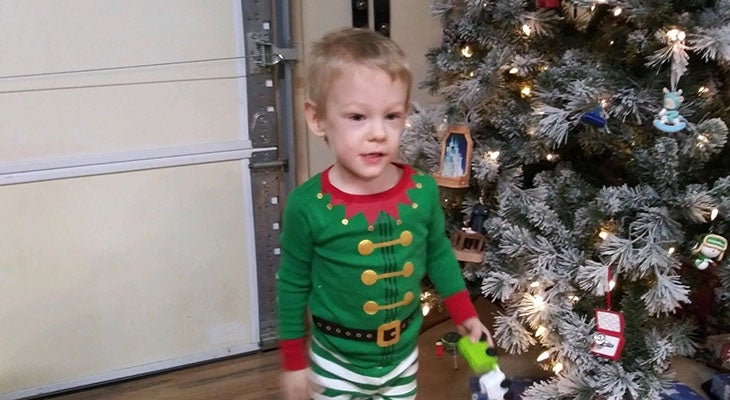 Lindsay Rogers and her husband, David, tried for 16 months to get pregnant, including three cycles of fertility medications. As she considered whether seeing a fertility specialist might be the next step, she became pregnant with their son, Liam, in March 2018. Lindsay describes the pregnancy up to 20 weeks as completely normal. After hitting 22 weeks, she began spotting while at work. It would begin a journey that would keep Liam in the neonatal intensive care units (NICUs) of Norton Women’s & Children’s Hospital and Norton Children’s Hospital for 126 days — including procedures for retinopathy of prematurity.

From spotting during pregnancy to delivery at 23 weeks

During the 20-week scan, Liam looked great. About 5 days after hitting the 22-week mark of her pregnancy, Lindsay went to work like normal.

“I had started bleeding a little bit,” Lindsay said. “I called my doctor and she told that it can be normal as long as it is a small amount of blood, and I didn’t see any discharge.”

Lindsay completed her work day as usual and went home. She was still experiencing some bleeding. As she was preparing to go to sleep, she went to the bathroom.

“As I’m getting ready to go to the bathroom, I feel something’s coming out, and it felt like a water balloon – it was actually Liam coming out in his amniotic sac,” Lindsay said. “We rushed to the emergency room of Norton Women’s & Children’s Hospital.”

Lindsay describes that time in the emergency department as a whirlwind. An ultrasound was done to check Liam’s positioning, to make sure he had not entered the birth canal. She was admitted to the hospital and given magnesium and steroids in the hope that baby Liam would stay in the womb longer and continue to develop.

“I made it four days,” Lindsay said. “My son was born at 23 weeks and two days. When he was born, he didn’t cry or make any noise. But I do remember one of the respiratory therapists giving us a thumbs up that they had intubated him and that he was good. And then they put him in the incubator, and they took him off to the NICU. It all happened so quickly; it took minutes.”

Liam would spend about 75 days in the Norton Women’s & Children’s Hospital NICU. During his time there, the family experienced many of the ups and downs that parents can experience in the NICU, according to Lindsay.

“Sometimes you go in, and everything will be great,” Lindsay said. “But in the same regard, just sitting there with them can be really difficult. Because their heart rate will go down, or their oxygen saturation will go down. And machines are beeping and staff are rushing in. I can remember clearly that I was once holding Liam and his oxygen saturation became so low that they had to actually bag him on my lap.”

In those moments, the NICU staff made all the difference, according to Lindsay.

“They are such a calming presence,” she said. “They would come in with speed, not panic, and they know what they’re doing. It’s this feeling of, ‘They’ve got this, they’re going to make sure that he’s going to be OK.’ The fact that they’re so in control and naturally calming, they just make you feel better, even in the worst moments.”

Liam developed retinopathy of prematurity (ROP), a condition in premature babies that causes blood vessels to grow abnormally in the eye. During pregnancy, a baby’s retinas begin developing blood vessels around 16 weeks and continues to develop until a child is full term. For children born early, normal blood vessel growth can be disrupted or stop, and the condition may develop. The blood vessels are fragile and can leak or bleed, scarring the retina, the layer of nerve tissue in the eye that helps us see. Scarring can cause the retina to detach, causing blindness. Mild cases of ROP can resolve on their own, but if scarring is present in the eye, surgery is needed to prevent vision loss or blindness.

Liam would be moved to the Level IV NICU at Norton Children’s Hospital before undergoing laser surgery for ROP with ophthalmologist Charles C. Barr, M.D. During the procedure, small laser beams scar the peripheral retina. This procedure, also called laser therapy or photocoagulation, can last about 30 to 45 minutes for each eye. Liam also required injections into his left eye in addition to surgery. The injection of Avastin into the eye helps to block one of the chemicals that causes the abnormal blood vessel growth in ROP.

Liam stayed at Norton Children’s Hospital for 51 days before being discharged.

“It was tough. It’s hard to see your baby go through all of that,” Lindsay said. “But his vision is excellent now.”

Liam is now a thriving 2-year-old, according to Lindsay.

“He has no fear. He loves to climb. We are constantly telling him not to get on things or jump off things,” Lindsay said. “He’s just a rough and tumble 2-year-old boy. We joke that I’ve done all of my worrying about him for a lifetime, and he’s not allowed to make me worry anymore.”