The chance of identical twins both having Type 1 is as high as 50%, but otherwise the chance of two siblings having the disease is about 5%. 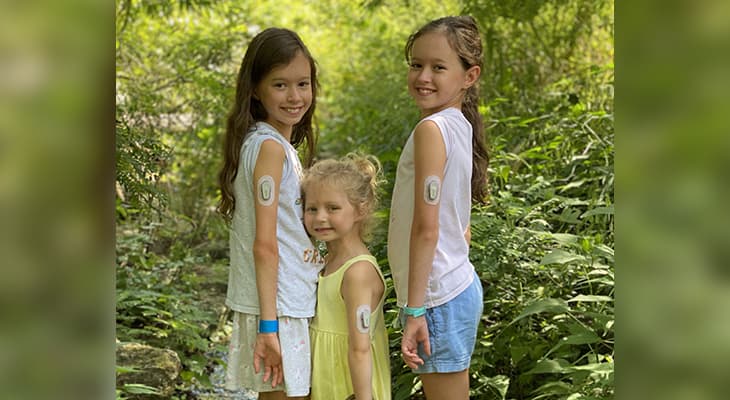 When their identical twin daughters Quinby and Stella were born, Natalie Chrisman and her husband, David, knew very little about Type 1 diabetes. There was no known family history of the disease. When Quinby started experiencing extreme thirst and frequent urination at a year old, they didn’t know what could be wrong.

“We brought her in to the emergency room, and her blood sugar was like 650,” Natalie said. (The highest end of the normal range for a well child under age 6 is 140 mg/dl.)

Quinby was admitted to Norton Children’s Hospital, where she came under the watchful care of Kupper Wintergerst, M.D., pediatric endocrinologist with Norton Children’s Endocrinology, affiliated with the UofL School of Medicine, and director of the Wendy Novak Diabetes Center. 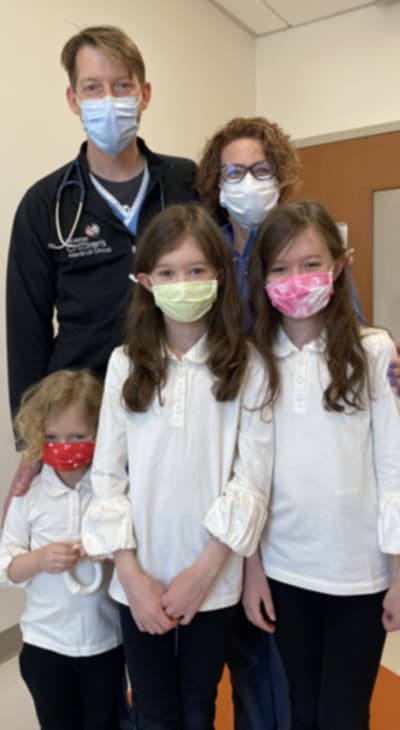 Dr. Wintergerst and his team began to educate Natalie and the family about the condition and how to manage it. Because of Quinby’s diagnosis, the family kept a close eye on her twin sister Stella. While Stella showed no symptoms of having Type 1 diabetes, tests obtained through a monitoring research study known as TrialNet, determined she did have some of the same genetic markers for the disease.

A second … and third … diagnosis

Over the next few years, the Chrismans learned all about managing Type 1. During that time they also welcomed a new addition to the family: Ruthie.

The chance of identical twins both having Type 1 is about 50%, but otherwise the chance of two non-twin siblings having the disease is about 5% to 10%. There’s a genetic component to Type 1, but it’s believed some external stimulus, such as exposure to a virus or a pollutant, is required to trigger the body to start damaging insulin-making cells. So far, researchers have not identified any one cause, and it is most likely many different things that can lead to Type 1 diabetes.

For those reasons, the Chrismans kept a close eye on Stella, but hadn’t expected Ruthie to be their second diabetes diagnosis.

“Last year, Ruthie, who was 3 at the time, started to display the same symptoms Quinby did before she was diagnosed,” Natalie said. “We already had glucose monitors at the house, so I checked her blood sugar. It was too high for the monitor to register.”

They took Ruthie to Norton Children’s Hospital emergency department, where their suspicions were confirmed.

“We knew that (Stella) had positive antibodies, and we knew Type 1 was possible,” Natalie said.

“For Ruthie, that really wasn’t on our radar. All of the diagnoses were sad, but that one was, I think, the most shocking and alarming. We weren’t expecting that one.”

In the spring of 2021, Stella, now 9 years old, started displaying symptoms and was formally diagnosed with Type 1 diabetes in August.

Three of a kind

Life with the Chrisman family can be considered chaotic to the casual outsider. Natalie and her husband wear Apple Watches so they can track the girls’ blood sugar.

“A lot of alarms are going off in our house all the time because of devices that tell us when their blood sugar gets too high or low,” Natalie said. “At times when we’ve had guests or someone over for dinner who’s not really familiar with those things, they’re very caught off guard by that.”

But that’s just life when raising three kids with diabetes.

“Managing one child with Type 1 is a lot of work,” Natalie said. “Having three is a full-time job.”

A special bond among sisters and with their doctor

While the girls face many challenges associated with having Type 1diabetes, it hasn’t slowed them down. They play sports, have friends and are enjoying life.

“I remember Stella, just these two little cute toddlers, and she would hold Quinby’s hand, whenever we were giving a shot. It was just really sweet to see,” she said. “They were there for Ruthie when she was diagnosed and then again for Stella’s diagnosis. They’re each other’s biggest supporters.”

The girls also have a significant bond with Dr. Wintergerst and the team at the Wendy Novak Diabetes Center. Dr. Wintergerst sees them every three months and has watched them grow.

“I feel like they’re my own daughters,” he said, pointing to some artwork they made for him that hangs in the office. “They are a tremendous family.”

The feeling is mutual. In fact, Quinby even has a photo of herself with Dr. Wintergerst on her bedside table.

“We just love him dearly, our family does, and our girls do as well,” Natalie said. “He’s been there from the very beginning, and he does a great job caring and being attentive, staying on top of what’s best for our girls and their treatment. He and the whole care team — we’re lucky to have them.”