The Centers for Disease Control and Prevention is cautioning against vaping due to an investigation into electronic cigarette-related lung disease. What can you do as a parent? 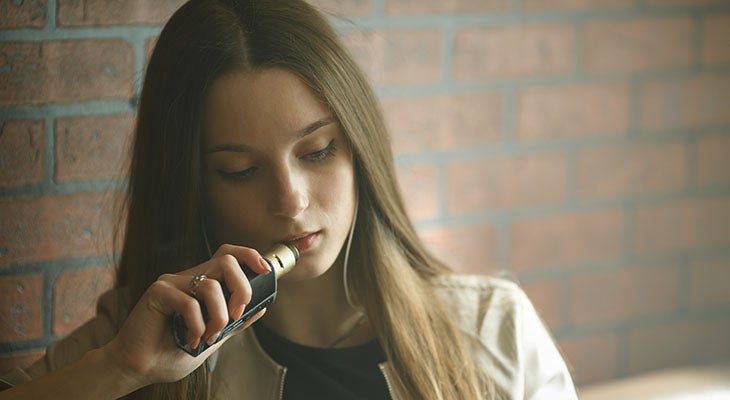 The Centers for Disease Control and Prevention (CDC) announced it is investigating 805 possible cases of electronic cigarette-related lung disease across 46 states, and one U.S. territory, including Kentucky and Indiana. The CDC confirmed 12 deaths, including one in Indiana. The CDC is cautioning consumers not to use e-cigarettes. If your kids are vaping, what can you do as a parent?

Outbreak of the severe lung disease associated with e-cigarettes

The CDC, Food and Drug Administration (FDA), state and local health departments, and other clinical and public health partners are investigating a multistate outbreak of severe lung disease associated with use of e-cigarette products (devices, liquids, refill pods and/or cartridges).

A preliminary report on cases of the condition in Illinois and Wisconsin was released this month by the New England Journal of Medicine. The median age of the 53 patients in the study is 19. The patients reported using nicotine, substances with THC, or both. According to the CDC, no single device, product or substance has been identified as a cause. E-cigarette fluids alone contain “at least six groups of potentially toxic compounds,” the report said, and suggested that the mixture of chemicals might create new toxins.

Public health officials including the CDC and the report’s authors state that this condition is a new phenomenon and not a recognition of an ongoing syndrome that has developed over time.

Youth vaping in Kentucky and Indiana

The most recent Youth Risk Behavior Survey shows that 15.1% of Kentucky middle schoolers and 44.5% high schoolers acknowledge trying some kind of vaping device. Almost 4% of middle schoolers and nearly 15% reported current use. Nearly 30% of Indiana 12th graders report vaping in the last month, according to the most recent Indiana Youth Survey. For Indiana students in seventh through 12th grade, 16.9% reported vaping in the past 30 days.

How to tell if my child vapes

For parents, it may be difficult to tell if their child is vaping. Many vaping devices look like everyday objects. Unlike with traditional cigarettes, there is no smoke, so it can be difficult to catch a child in the act. E-cigarettes create an aerosol by heating a liquid that usually contains nicotine, flavorings and other chemicals that help to make the aerosol that dissipates quickly. Here are some signs that may guide you to have a conversation with your child about vaping:

What parents can do about vaping

Parents should have open, honest discussions about the health risks of smoking and vaping. You can be a role model and set a good example by not smoking or vaping. If you use tobacco or even vape yourself, consider quitting. There are many resources available to help people quit.

“If you want to talk to your child about smoking and vaping but you don’t know where to start, make an appointment with your pediatrician,” said Jennifer L. Segeleon, M.D., pediatrician with Norton Children’s Medical Group – Lakeview. “Pediatricians are happy to discuss the health risks associated with vaping, smoking and other behaviors. In addition, consider asking other adults in your child’s life, such as teachers and coaches, to endorse the message that vaping is not good for your child.”

According to Dr. Segeleon, if your child is already vaping, ask him or her to quit. Provide resources and support , and talk to your pediatrician.

“It’s never too late to get on the right path with your health,” Dr. Segeleon said.