Carrollton survivor reunites with nurse who saved his life

Carrollton survivor reunites with nurse who saved his life

Photo brings them together decades after the crash 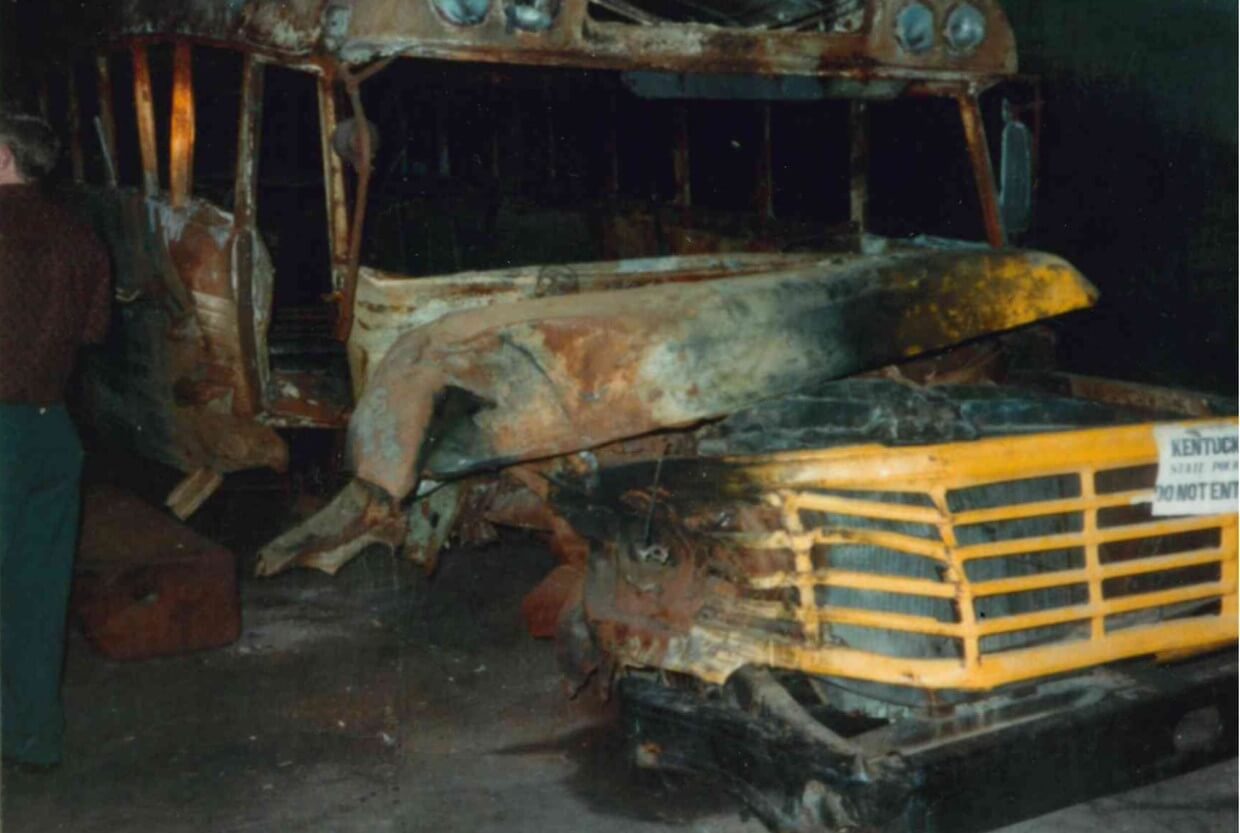 We were at Kings Island and had a great time. We left the park around 9:30 p.m. and got on the bus. My best friend that invited me (he died) went there with a girl and I was sitting with her on the way home — I stole her that day. That messed me up a little bit.

I remember we stopped at a gas station and shortly after, we got back on I-71. It was the middle of the night and I was half asleep. Suddenly, we felt a big thump and heard the crash. We were all fine. The next thing you know it’s pitch black. Seconds [later] everyone started screaming — the glow from the fire came from the front of the bus.

There was nowhere to go. Old buses didn’t have emergency windows and with the fire in the front, our only option was to go to the back. I was sitting six seats behind the driver and you’re not going to go anywhere with 60 or 70 people behind you.

The heat started melting my skin. I fell to the floor. A doctor told me days after that the only reason my face didn’t get burned is because I laid face down with my arms covering myself, which is why my arms got badly burned.

I should have died. I don’t remember hearing the kids’ cries or getting stepped on. Something told me to get up. Somehow I did and got to the back door. I remember sticking my arm out through the kids and getting out of the bus. A truck driver passing by helped me out.

I have a scar on my knee from when I hit that ground. I hate looking at the scar, and my daughter asks me why. That’s when I really woke up, looked around and saw the chaos and realized what was going on. At 15, you can’t fully understand the tragedy unfolding before your very eyes.

A lady pulled me to the median and laid me down. We didn’t have cellphones back then, so I am asking her to find my parents, to let them know what happened. She talked to me to calm me down and keep me from going into shock. I didn’t feel any pain.

Shortly after, I heard the ambulance. They got me on a gurney, into the ambulance and to Carrollton Hospital. The hospital was already full. I ended up at Norton Children’s Hospital.

Then it got real. They cut my clothes off. Next thing I knew, I was getting bottles of saline poured over my arms. I blacked out from the pain.

I woke up in a hospital bed with tubes in my mouth. I couldn’t speak. My father was standing over me crying. He never cried. I saw my mother off to the side, people holding her up.

I found out that the doctors told my parents that I was probably going to die because my lungs were so bad and I couldn’t breathe on my own. 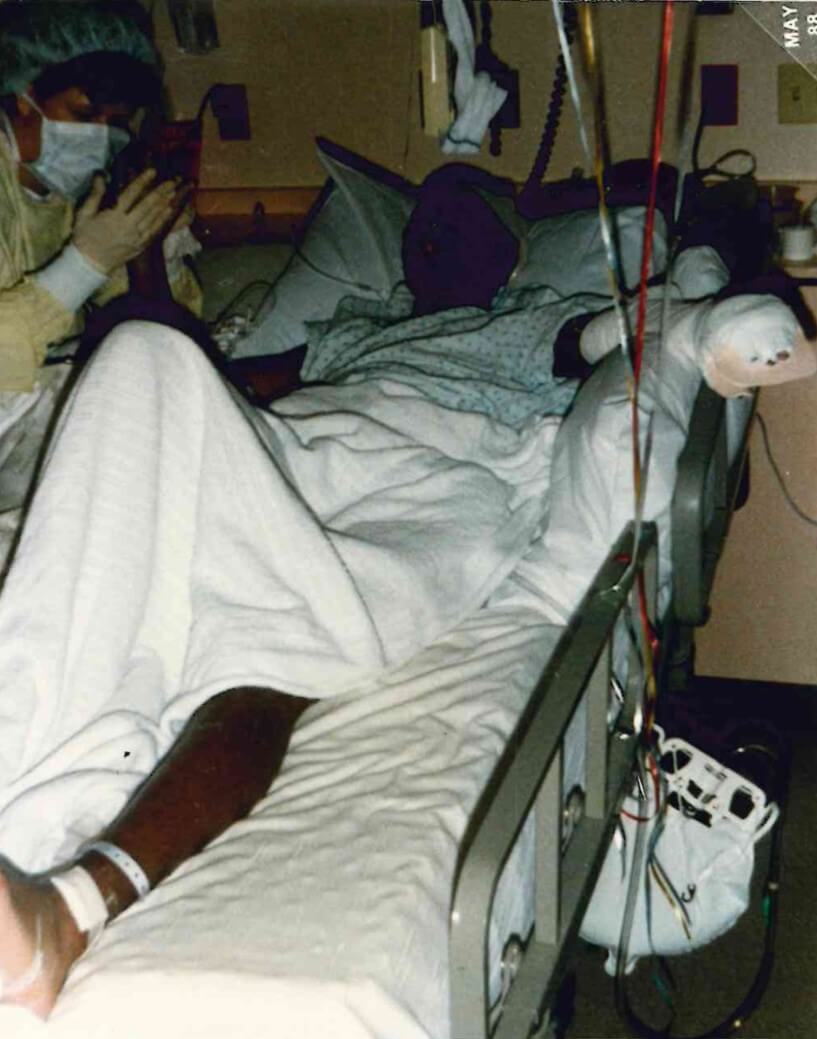 Judy: It was not my weekend to work. My husband and I went to dinner with some friends. We got home, turned on the news and saw the crash. I looked at my husband and told him I had to go. You’re always taught to call first. So I called the house supervisor and told them I worked in the intensive care unit and had burn experience. They said they needed me.

I’ll never forget walking into the unit — the smell, the sounds, the cries. I was so overwhelmed — none of us had seen anything like this. Fortunately, we had great doctors and leaders. Cis Gruebbel was my nurse manager at the time, and when she saw me she put a tag on me and said you’re going to this room and this room. One was Quinton’s.

Quinton: Those first initial days were hard. For a week, they were taking a tube in and out of my mouth. I wanted it out, but I still couldn’t breathe. Several days later, the tube came out and I could finally eat.

Norton Children’s Hospital slowly became home for me. It seemed like a lifetime from being at Kings Island that day, to the crash and being at the hospital. As a kid, you’re used to getting up every day, going to school, playing and then you’re suddenly stuck at the hospital with all of these injuries.

Judy was my main nurse. We bonded instantly. She would come in and smile and talk to me. I even asked her to marry me one time when I was on morphine. 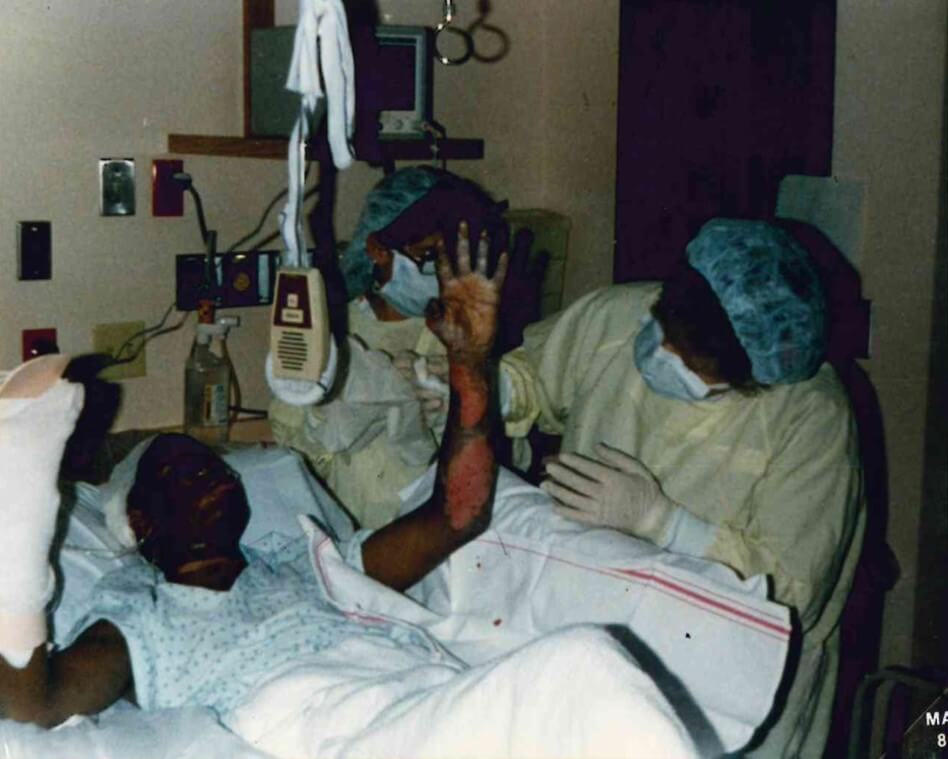 Judy: I had to clean Quinton’s arms every day and he hated it — it’s so painful. And during it, we’d sing. The singing was good for his lungs, but it was also a good distraction — for both of us. I can’t sing worth a lick and everyone would make fun of me, so we’d all be laughing and carrying on while trying to belt out the words.

Quinton was in the unit for about 6 to 8 weeks, and each time I was always assigned to him. We celebrated small victories. At first they were very small, but we took it one step at a time. When you’re allowed that opportunity to take care of one child, you become part of their family. It was my job to keep him safe and healthy but also provide emotional support. Quinton saw his friends die. It was an incredible feeling of sometimes gloom, but I could not let Quinton see that. I had to be on my game so that I could be sure he was on his game.

Quinton: For me, Judy was like my mom. In looking at pictures, the rooms were so small and Judy came in every day and was smiling. Being in the hospital for so long, I wasn’t smiling but I looked forward to seeing her.

When it was time to go home, I remember being scared to leave Norton Children’s Hospital. When I got home, I took out all these pictures my dad had taken while I was there. For almost 30 years, Judy’s face has been a comfort to me. 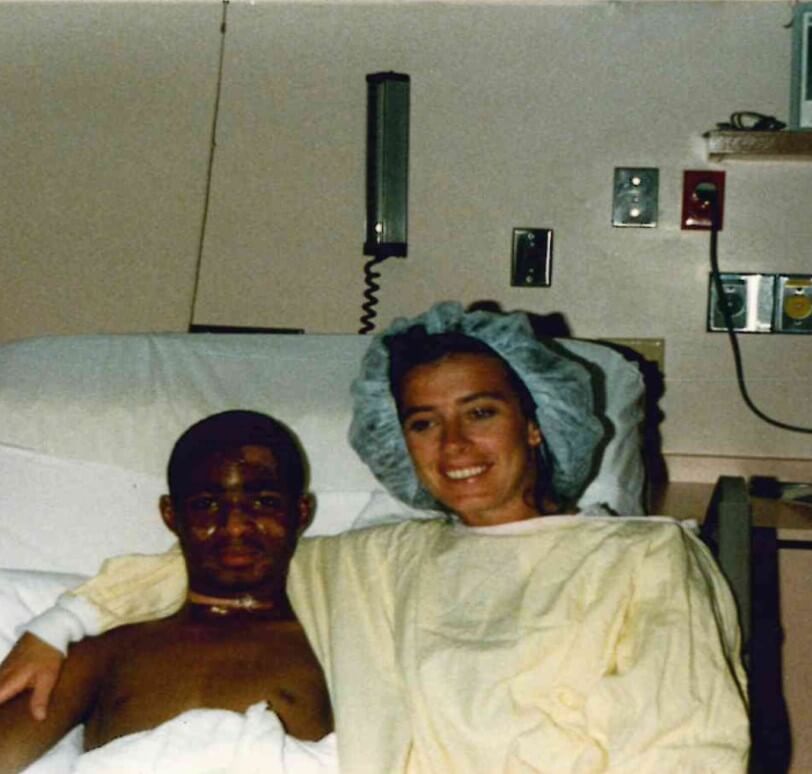 I — and other survivors of the crash — still feel the emotional scars. In a crazy way, we go through more now than we did as kids because a lot of us never spoke about it. This picture of me and Judy (below), I keep it sacred. I’ll still take it out, talk to it and say thank you. I remember the joy that Judy had. I don’t think they can ever imagine all the nurses did for all of us.

The one thing we talk about, especially starting in May near the anniversary of the crash, is our nurses and what they meant to us. I’ll share my picture and we’ll talk about everything we remember. Norton Children’s Hospital was home to us.

Judy: When Quinton left, it felt like our bond was over. The hospital let us grieve after going through what happened, but I lost touch with Quinton.

Four years ago, he shared the photo of us on Facebook. I found it and I said, “That’s my Quinton!” Quinton’s post said, “Does anyone remember this nurse?” And I replied, “Quinton, it’s me! That’s us!”

Quinton and I met up during the Norton Children’s Hospital 125th birthday celebration back in January. It was the first time we met face-to-face since he left as a patient. His face brings back so many memories. It’s great to see him smiling these days.

Quinton: I always remember growing up at Norton Children’s Hospital and Judy’s kindness, passion and love. Going through life, I am so glad I held onto that photo of me and Judy, knowing that she guided me through such a physical and emotion journey. I’m thankful for this hospital and people like Judy who saved my life. 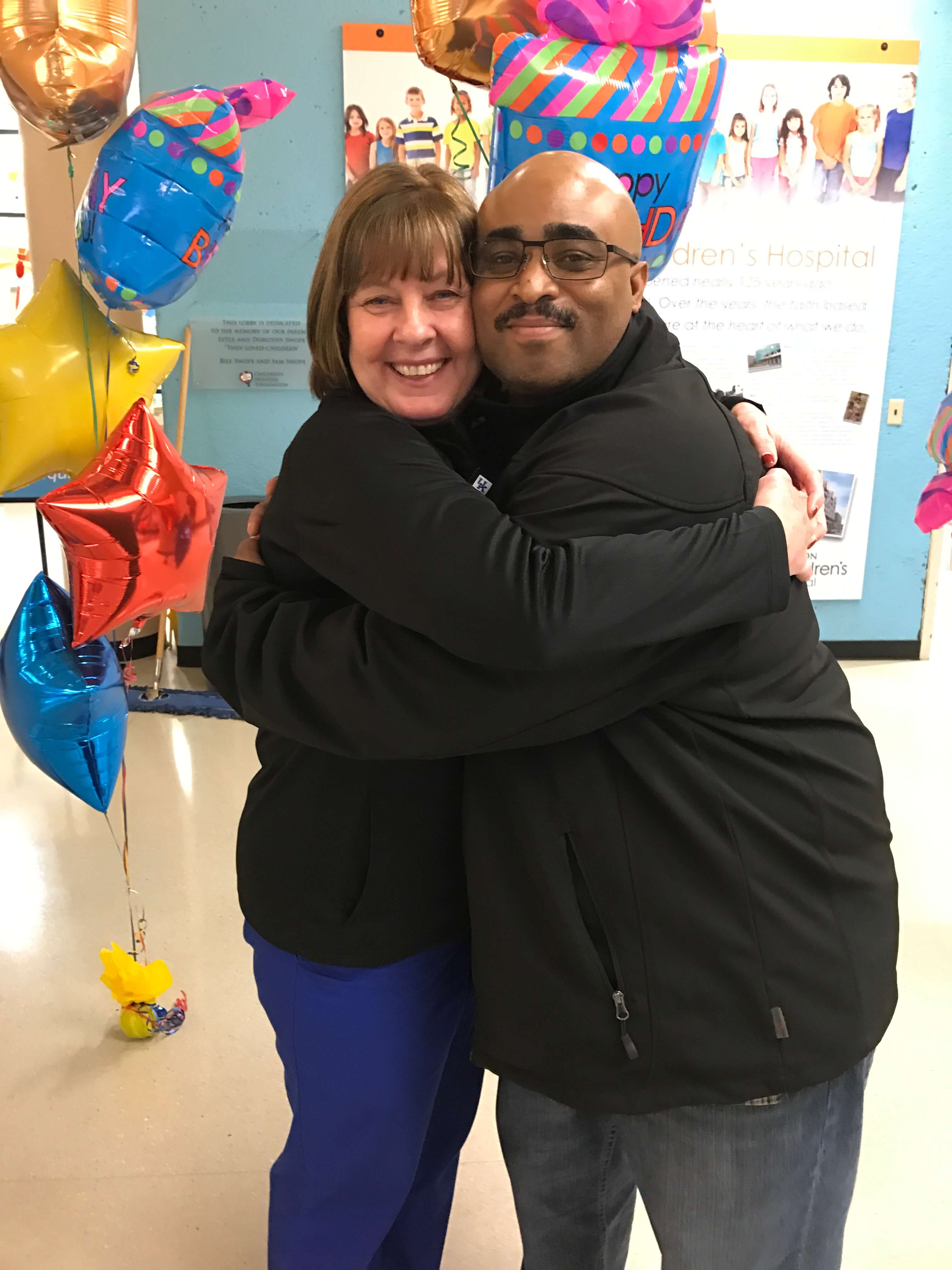