Brothers open up about losing youngest sibling to cancer 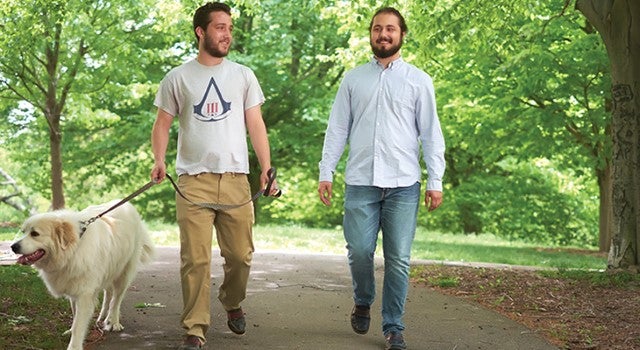 It was awful, as little kids, when our grandmom died of lung cancer. That was our frame of reference for the injustice of this disease until Feb. 15, 2016, when our little brother, Owen, died of cancer. He was 16. Owen was in treatment for T-cell ALL (acute lymphoblastic leukemia) for more than four years.

In that time we met and knew about many other kids — some as young as 2 years old — who died of cancer. Now we understand firsthand that cancer isn’t just something that happens to old people, and certainly not something that just happens to other people. It killed Owen.

Owen was diagnosed in November 2011. We were devastated and will never forget that first night in the hospital. We were quiet and unsure what to say, so Owen comforted us. He clowned around as usual to make sure we were OK. Being brothers, we spent countless days and nights by his side at Norton Children’s Hospital and at home. We shaved our heads. We got to know his nurses and some of his doctors. We played video games with him and watched hours and hours of movies and television — just to try to take his mind off of his illness.

That first year it was beyond hard to see him go from a healthy, active and athletic 12-year-old to a sickly looking cancer patient. Through that his spirits stayed high, and he was still the funny little brother we were used to — even when at times he was too sick to do anything but lie still in bed.

The hardest part was hearing that his cancer was high-risk and the treatment might not work. Never were we so happy as in August 2012, when Owen finished the intensive chemotherapy and started maintenance. It was like we had our brother back. He returned to his normal self quickly, even though he still had to take chemo every day and have procedures every few months.

It was easy for us to forget cancer still affected him. It was obvious that for him, being back in school and back to his friends were what mattered. He loved that he felt stronger than the cancer, and he told us (not in terms that polite) all the time!

He loved dressing up. Bourbon & Bowties was made for him — he got to be with the hospital people and he got to look great. He was especially happy that his story would help the Children’s Hospital Foundation raise money to provide better services for all children and, potentially, help with finding better treatment for cancer.

Owen was always glad to help. He gave a talk at the annual Snow Ball gala while wearing a tuxedo. We were there, as were several of his friends. He was the center of attention and obviously loved it. At ages 21 and 22, we are both happy not to be talking in front of 800 well-dressed people, much less about something so personal as our own health. Owen went on to give a similar talk to Northwestern Mutual’s sales force and participated in other activities to help the children being treated at Norton Children’s Hospital.

One as funny, smart and giving should not have had to endure what Owen did during the last 18 months of his life. Owen relapsed in August 2014. He underwent another several months of intensive chemo, radiation, a bone marrow transplant, another relapse, a brief period of feeling much better and then months of slow but obvious decline. On days that he felt good, he still lived life to the fullest — but it didn’t last.

Our lives will be forever changed for having seen Owen’s bright light dim. We know that while there is compassionate care, and all the care that is available in the world, it is not enough. We know more needs to be done so that in the future, kids like Owen will live. And other brothers won’t have just a memory.