‘I can’t take this away from my child’ 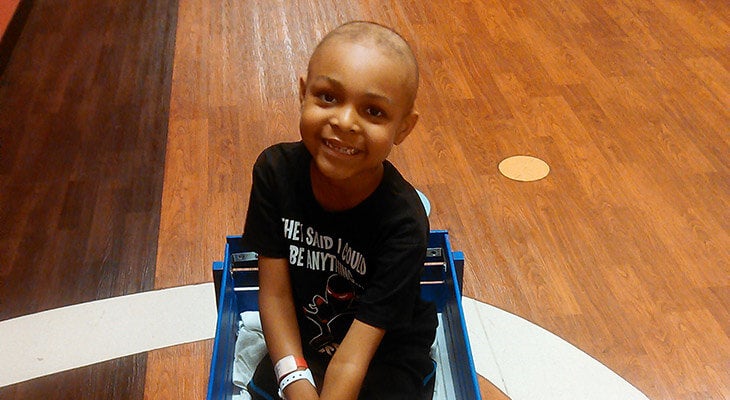 Michael Yocum Jr. was diagnosed with childhood cancer at age 5. His mom, Spring, recounts the challenges, speed bumps and her son’s faith throughout his journey.

He was very thrilled to be at the hospital because he thought it was a hotel. He was only 5 at the time so he had the beautiful innocence of a child. Michael was so young that he didn’t really realize what was ahead.

He started treatment for leukemia in March 2015 and doesn’t end treatment until July 2018.

Treatment has been very rough. Michael, now 7 years old, has spent more than 110 days at Norton Children’s Hospital since his diagnosis. He has had countless spinal taps, blood transfusions, fevers, two surgeries and most recently was diagnosed with an adrenal insufficiency disorder. The toughest times are when he is admitted for two weeks at a time for fever. He has missed tons of school due to the effects of treatment and that has been very tough.

Sign up to become a Hero for Kids by making a monthly donation to Norton Children’s Cancer Institute in affiliation with the University of Louisville.

But he has been so resilient during his fight; he truly has faith. His great outlook keeps all of us going and looking ahead to the end of treatment. Michael’s faith is beautiful to witness. I feel he has the best personality to fight this journey.

At the time he had been seen by an (ear, nose and throat [ENT] physician) and an allergist for several weeks. We thought he needed his tonsils and adenoids replaced when the ENT requested a biopsy of one of his largest lymph nodes. I was called the day after the biopsy to come in the following day for our follow-up appointment. During that 10-minute appointment, the ENT informed me that the biopsy came back as cancerous. She stated that the hospital was waiting on us and asked for us not to go home because Michael will be admitted.

One night I was in the bed with Michael and he opened up and asked if my husband or I had cancer in the past. He is totally aware that my mother had cancer twice and won the fight. I replied, ‘No, we have never had cancer,’ and then he asked how he got cancer. At that moment I think he would have felt better if his parents had gone through the same thing he’s currently experiencing. That moment was huge for me because I realized I can’t take this away from my child and heal him.

When Michael was first diagnosed we had tons of support and we actually had an overflow of visitors at the hospital. We actually had to have visitors come in shifts. His room was filled with over 20 balloons. At that moment we knew we weren’t alone.

Our family has been amazing during this fight. They’ve done everything from staying at the hospital so my husband and I can work, to cooking dinners, to taking Michael to appointments and attending fundraisers. From day one our community has been absolutely wonderful and has stepped up with numerous fundraisers, house visits, care packages — you name it! We have created lifelong friends and have an amazing support group that consists of family, friends and community.