The cancer journey from a sibling’s perspective

The cancer journey from a sibling’s perspective

‘He couldn’t be a normal teenager’ 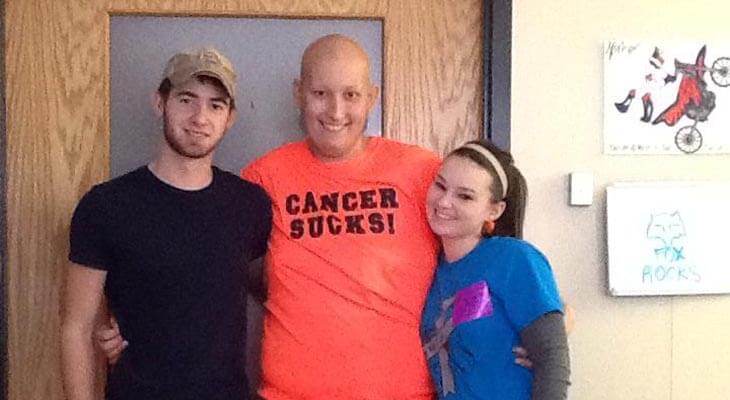 Living with cancer at any age is difficult, but experiencing cancer as a teen is especially difficult when you’re trying to be “normal.” T.J. Branham’s sister, Kayla, opens up about her teen brother’s diagnosis and his incredible strength throughout his cancer journey.

I remember so clearly getting the call from him almost in tears saying they had done an MRI and found a spot on his brain. I don’t remember driving to town, I just remember walking in the waiting room and there he sat with some of his friends still smiling like he always did. There were so many people at the hospital to support him. We prayed before the ambulance headed to Louisville with him and us right behind them. When we arrived at the hospital, T.J. was taken to the emergency room to be admitted. He was nervous (I could tell), but he still managed to keep us all laughing when all we wanted to do was cry. He was put in the ICU that night and would have tests run that next morning. Cancer never crossed my mind. Later on T.J. told us he was scared because he knew in his heart that’s what it was.

The surgery seemed like it took all day but really it took around six hours. We finally got the call that surgery went good and he was in recovery and we could see him soon. As we stepped off the elevator, all I could hear was screaming and crying, and my heart dropped. I saw my uncle coming around the corner and the look on his face was something I’ll never forgot. He looked like he had seen a ghost. The first thing he did was grab me and say, “He has cancer.” I was sick to my stomach. How was I going to face my mother? All these years it was just my mom, T.J. and I. I didn’t know what to say to her or how to react. I was numb, like someone had ripped a piece of my heart out. I hit the floor; I was mad and just wanted to know why. Why was it my little brother who would have to go through this as well as all the children who are battling diseases? I finally came face-to-face with my mom. She just kept saying, “I don’t know how to feel.”

The chemo took a huge toll on his body mentally and physically. Until you’ve seen someone go through chemotherapy and the process you really can’t imagine what it’s like. T.J. pretty much lived on Ensure and Powerade. He was weak and just aggravated that he couldn’t be a normal teenager like all his friends. I remember them bringing the chemo bags in. They were in black bags. I asked why they were in those bags and it’s because the sunlight from the windows can’t get through them. I was blown away. T.J. got really depressed and didn’t want anyone to come see him like that. This was hard for all of us to watch. He was always so happy and had a big smile on his face. As a child T.J. was so loving, full of energy and kept us on our toes. He loved riding anything with wheels and loved to be outside.

Sign up to become a Hero for Kids by making a monthly donation to Norton Children’s Cancer Institute affiliated with the University of Louisville.

In May 2013, we received the best news we had heard throughout the journey. Mom got the call that T.J’s MRI was clear. There was no tumor to be found. Many tears were shed as well as many prayers to the Lord for answering our prayers. Of course we had him a party and invited everyone we knew. The end of July is always our fair time and he actually got to participate in activities. He got to ride his four-wheeler in the rodeo for the first time since he found out he had cancer. Everyone there stood up cheering for him in excitement that he was able to do it.

ALSO: ‘How do you tell a 3-year-old they have cancer?’

Then in August 2013, T.J. had to go for an MRI to make sure everything still looked good. It seemed like we waited for days to hear the results because we were so nervous. A few days later Mom got the call and it’s one we will never forget. His tumor was back and had grown larger. We were once again heartbroken and just couldn’t understand. Without our faith in the Lord we would have never made it this far. It was back to Louisville for them to discuss what was going to happen next. T.J. was fixing to go into his junior year of high school — the best times of our lives for most. He struggled once again that he couldn’t be a normal teenager.

What it means to be a ‘fighter’

One night we were all at the hospital with him and he was saying things that days before he couldn’t. We were all excited because we thought he was starting to get his speech back and he seemed like he was feeling pretty good considering everything he was going through. The next morning, he was a totally different person, he was sick at his stomach and throwing up. As the day went on, T.J. got worse. His breathing was getting harder and harder.

I went in his room by myself just to say my last goodbyes. I told him I was going to be OK and for him not to worry about me. I would take care of the kids and do things in his memory because he was a true warrior and fighter. For the next four days we all stood by his side and let him listen to music and his dad read him verses from the Bible. His favorite Bible verse was John 3:16. The nurses came in to turn him around for lunch and when they did, he took his last breath. As much as I was heartbroken, I knew he was ready. He even told several people that he wanted to go home and he pointed to the sky. He was pain-free. No more hurting. He looked at peace.

This isn’t the ending of T.J.’s story. It’s only just begun. He was a hero and a fighter, and if you met him once you would never forget him. T.J. never gave up. He taught us what it means to be a fighter and to be tough when you have nothing but your faith to hold onto.