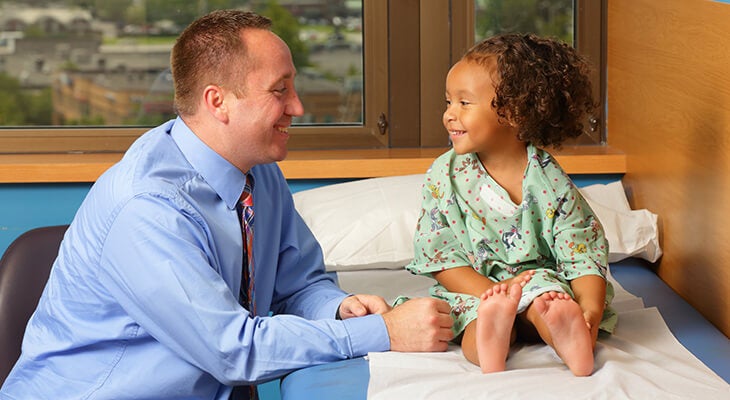 When many people think of shoulder issues, a professional athlete often comes to mind. But every year, thousands of babies in the U.S. are born with a brachial plexus injury.

The brachial plexus is a network of nerves that run from the cervical spinal cord in the neck to the shoulder, arm and hand. Their job is to tell the muscles in the top half of the body to move. These nerves play a big part in the sensation of touch and feeling. If the brachial plexus is injured, it can cause weakness and numbness and leave your child unable to move their arms and hands.

“When a baby comes out of the birth canal, their shoulder may get stuck, which causes a traction force to the brachial plexus,” Dr. Walker said. “Any clavicle fracture in a newborn should be assessed for a brachial plexus injury.”

Brachial plexus injuries don’t happen just to newborns. They also occur in kids and adults who play contact sports or are involved in an accident.

Depending on a child’s age, different types of symptoms can appear. Babies may not move the injured arm. They may hold the affected arm by their side, with the elbow straight, and the forearm and hand turned in. This sometimes is called “waiter’s tip” deformity.

If your child’s doctor suspects a brachial plexus injury, he or she might order a physical and neurological exam, including magnetic resonance imaging (MRI), electromyography (EMG), ultrasound and X-ray, depending on the condition and symptoms.

Dr. Walker said the majority of these injuries will heal on their own in three to six months.

“It’s not a quick recovery like a broken bone,” he said. “While the nerves regenerate, I often encourage parents of newborns to perform light stretching to preserve their baby’s range of motion. For older kids and teens, it’s important to rest and rehabilitate the injury, and not return to sports too soon.”

For some, the injury may not heal on its own. More severe symptoms result from injuries that seriously injure or even tear or rupture the nerves. That’s when surgery is an option.

“The closer the injury is to the spinal cord, the more severe the injury likely is,” Dr. Walker said. “Many times without surgery, some patients will never gain function of their upper extremity.”

If you’re concerned your baby or child might have a brachial plexus injury, Dr. Walker recommends scheduling an appointment with an orthopedist as soon as possible.

“The sooner we’re able to diagnose a brachial plexus injury and develop a treatment plan, the better the chances for your child’s recovery,” he said.