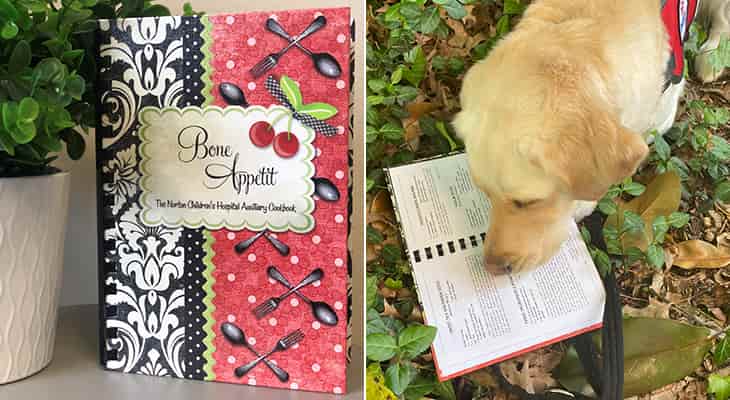 “The Norton Children’s Hospital Auxiliary produced a cookbook in 2002, so we knew we had the skills to manage the project,” said Christine Schneider, Norton Children’s Hospital Auxiliary president. “We also knew it would be very time-consuming, but since we could not volunteer in the hospital in 2020, it seemed like a perfect way to stay productive.”

The cookbook includes a variety of dishes, including heart-healthy and diabetes-friendly recipes from registered dietitians and decadent favorites we all love. Divided into eight sections, it also includes some signature dishes from four Louisville restaurants: Cunningham’s Creekside, Le Moo, Grassa Gramma and The Village Anchor.

“One of the best parts of editing recipes from the professional chefs was that they were so well written,” said Karen Hughes Miller, Norton Children’s Hospital Auxiliary member who served as the book’s editor. “They are almost like mini-cooking lessons as they explain how to prep ingredients and what utensils to use.”

The 300 recipes were collected from Norton Children’s Hospital Auxiliary members, Norton Healthcare employees, members of the Women’s Club of the University of Louisville, several neighborhood groups, garden clubs and others who just wanted to be a part of the project.

“You can see from the collection what Louisvillians love to eat!” Miller said. “As the recipes came in, we realized we had several variations on broccoli salad, at least three for bourbon balls, and several whiskey and bourbon slushes. So we decided to include recipe variations and place them together so readers can compare and perhaps come up with variations of their own.”

Also included are some simple kid-friendly recipes, more sophisticated dishes, several excellent recipes for large groups thanks to a retired caterer, and some fun projects like dog biscuits and homemade play dough.

“When recipe contributors mentioned Kentucky products by name, such as Lotsa Pasta’s canned marinara sauce or Purnell’s Old Folks sausage, we made a point of leaving them in,” Miller said. “We also included notes from contributors that mentioned if it was an heirloom recipe, preparation tips or what sides went well together.

“We wanted the book to be as fun and personal as possible — like friends sharing recipes.”

“The Heel, Dog, Heal program inspired the name of the cookbook, ‘Bone Appetit’!” said Margie McClamroch, committee member. “Even the publisher got a chuckle out of that when they realized we did not have a typo!”

Heel, Dog, Heal consists of a team of 10 facility dogs and human handlers who serve Norton Healthcare’s adult and pediatric facilities. Research shows that facility dogs have many beneﬁts for patients and families, such as providing emotional comfort before a procedure or encouraging movement for physical recovery. Facility dogs also provide children with an outlet to verbalize their fears.

Crust:  Crumb together cake mix, butter, and coconut and press in 9×13” pan.

Variations: Use peaches instead of apples and omit raisins