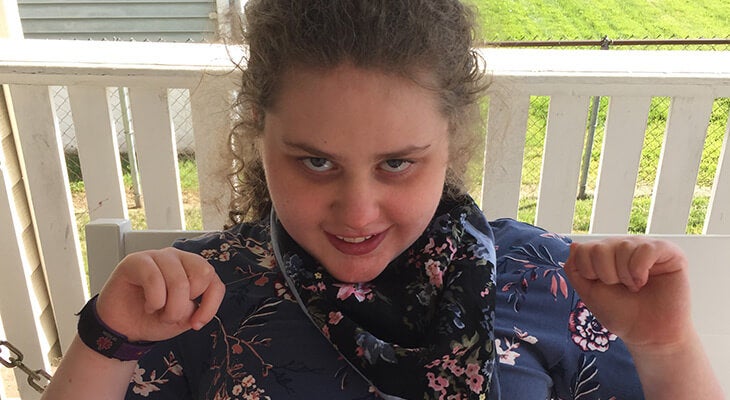 Grace Hatfield seemed to be developing like a normal toddler. She was walking, talking and interacting with family. But as she approached 15 months, her development seemed to start going in reverse.

“Grace began losing words,” said Kim Hatfield, Grace’s mom. “Then, while talking to her, she’d start to zone out — just staring at the ceiling.”

By the time she was 2, Grace was hardly saying anything. Instead she would have meltdowns, crying for hours on end. The Hatfields, who live in Bardstown, Kentucky, took her to a specialist. The diagnosis: autism.

“Her hands were always bent in toward her face,” Kim said.

When Grace was 6, another symptom appeared. She started having multiple seizures a day. Kim drove Grace to Norton Children’s Hospital, where a neurologist offered a new diagnosis: Rett syndrome.

A genetic blood test and MRI confirmed it.

What is Rett syndrome?

Rett syndrome is a rare, noninherited genetic neurological disorder resulting from a genetic mutation on the X chromosome. The condition mostly impacts girls, though it can occur in boys. The condition causes loss of previously learned skills, abnormal repetitive movements in the hands, slowed growth of the brain and head, difficulty with walking, and seizures.

In the early stages of the disease, children with Rett syndrome may have behavior abnormalities characteristics of autism spectrum disorder. They might walk on their toes or have other gait changes, have sleep problems and experience repetitive movements. Children may also develop breathing difficulties, such as breath-holding, air-swallowing and hyperventilation.

Doctors diagnose Rett syndrome by observing signs of the disease during a child’s development. If there’s is a strong suspicion, the doctor may order genetic testing, as well as blood tests, MRIs and electroencephalography (EEG) to confirm the diagnosis.

There is no cure for Rett syndrome, but many of the symptoms can be managed. Patients with the condition have seen success with antiseizure medications, as well as physical therapy, occupational therapy, speech therapy and behavioral therapy.

Grace, now 17, continues to receive treatment for the condition. Medications help with the seizures, and she receives regular physical therapy. Although she can still walk and is able to go to school, she can’t talk.

“It’s like she’s trapped,” Kim said. “Her brain seems to know what to do but can’t communicate with her body to do it.”

But there’s also a lot of good in Grace’s life. She loves to be outside in the summer and swim. She also shows affection to others.

“She’s a little love bug,” Kim said. “Her teachers and classmates are very protective and supportive of her.”

And for that, Kim feels fortunate.

“Grace is celebrated for who she is,” Kim said. “That’s all I can ask for.”