Dr. Alsoufi vowed to become a cardiothoracic surgeon to help other families. Now he is chief of pediatric cardiac surgery at Norton Children’s Heart Institute, affiliated with the University of Louisville. 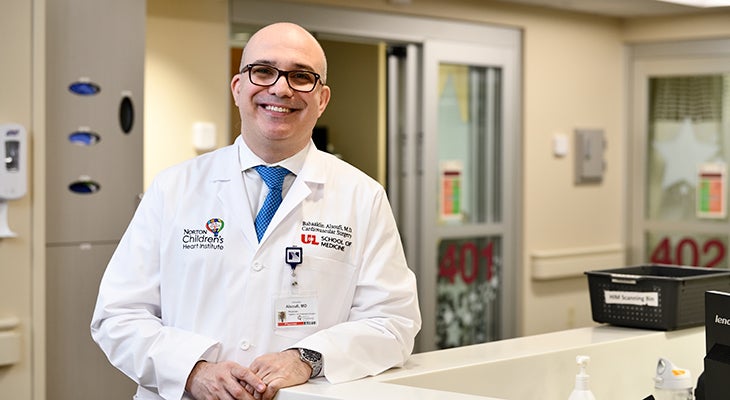 Bahaaldin Alsoufi, M.D., was a teenager growing up in Damascus, Syria, when his father collapsed from a heart attack. The 16-year-old watched with uncertainty and fear as his father was treated at a local hospital and later in the United States. Grateful and relieved to see him recover, he vowed to pursue a profession in heart surgery to help other families.

Thirty years later, Dr. Alsoufi has joined Norton Children’s Heart Institute, affiliated with the University of Louisville, and the University of Louisville Department of Cardiovascular and Thoracic Surgery as the new chief of the division of pediatric cardiac surgery. He is part of an advanced team of physicians, surgeons and others providing lifesaving, state-of-the-art heart care for children of all ages as well as adults.

“It was because of my father that I decided I not only wanted to do medicine but wanted to be a heart surgeon,” Dr. Alsoufi said. ”And now I’m doing my dream job.”

He joined renowned surgeons Erle H. Austin III, M.D., and Deborah J. Kozik, D.O., with UofL Physicians – Cardiovascular and Thoracic Surgery and Norton Children’s Heart Institute at Norton Children’s Hospital, which gained national prominence in 1986 when it became only the second facility in the nation to perform a heart transplant in a newborn.

Building from a foundation of excellence

Dr. Alsoufi arrived at Norton Children’s amid construction of the Jennifer Lawrence Cardiac Intensive Care Unit, supported by a $2 million gift from the actor’s foundation, to meet growing demand for specialized heart care. The unit will include private recovery rooms and space for families to stay with their child.

“The reason I chose Louisville is everyone shares the same vision and is committed to making pediatric cardiac surgery a top program nationally,” Dr. Alsoufi said. His goals include expanding the hospital’s reach and building on the success of its various programs.

He said he places a priority on maintaining Norton Children’s Hospital’s legacy of compassionate care for some of the region’s most vulnerable young heart patients. The wait for a heart transplant can be months for some, leaving families filled with intense worry and anxiety that he himself experienced as a teenager.

Empathy for families with a sick baby

About one in 110 babies are born with a heart defect in the U.S., according to the American Academy of Pediatrics, and at least 25 percent of those need surgery, from minor procedures to complex, multiple operations.

“You have to put yourself in a family’s shoes, understand how stressed they are, how worried they are,” Dr. Alsoufi said. “You really want to be frank with them and explain everything but also comfort them.”

This approach has won him a strong following from thankful families. “On holidays, they very often send cards,” he said. “When you get a card with a picture of a child who is 5 or 6 years old and you operated on him when he was 1 week, it’s very gratifying.”

Dr. Alsoufi, raised in Damascus, was a top student who attended medical school there before moving to the U.S. for a general surgery internship in Baltimore, Maryland. He completed a residency at the University of Massachusetts in Worcester and a cardiothoracic surgery residency at Oregon Health Science University in Portland. He completed a fellowship in congenital cardiac surgery at The Hospital for Sick Children in Toronto, Canada, and later worked at King Faisal Specialist Hospital and Research Center in Riyadh, Saudi Arabia.

Training the next generation of pediatric heart surgeons

As a member of the University of Louisville’s Department of Cardiovascular and Thoracic Surgery faculty, he’ll train new physicians. And he’ll continue his passion for research, which already has led him to author 150 peer-reviewed journal articles on various clinical outcomes. He’s on the editorial board of multiple international journals on cardiovascular and pediatric heart surgery.

Dr. Alsoufi averages about 250 surgical cases annually, from simple procedures to complex operations, including once performing a heart transplant on a toddler’s birthday. He said he’s fortunate to be able to have such a lasting impact, but the work also can be humbling.

“You’re still dealing with life and death,” he said.

With a long legacy of leading pediatric heart care, Norton Children’s Heart Institute pursues our mission to keep your child at the heart of everything we do — while supporting the needs of the entire family.

One of his favorite stress-relievers is painting modern figures using a Jackson Pollock-like drip method. Like his surgeries, he said, he enjoys seeing careful work evolve step by step. He also enjoys travel and reveling in different languages, foods and cultures — and particularly loves Paris, France; and Rio de Janeiro, Brazil.

But Dr. Alsoufi’s foremost passion is his family. His wife is an architect, and together they have four daughters, ranging in age from 6 to 16, all raised in North America. On breaks, they often visit relatives in Damascus, including his father. Dr. Alsoufi’s father lives in an area that largely was spared the destruction that has gripped Syria since the ongoing, multisided civil war broke out in 2011.

“It breaks my heart,” he said about the war’s toll on lives and destruction, including to historic sites such as Palmyra, whose ruins he recalled visiting as a child. The New York Times reported in 2017 that a Roman structure there was partly destroyed by Islamic State militants.

His parents still live in Damascus, taking pride in his accomplishments from afar. Asked if his father is aware of the formative role his heart attack played in his son’s trajectory, Dr. Alsoufi simply smiled and said, “He knows.”