An ‘over the fence’ moment

An ‘over the fence’ moment 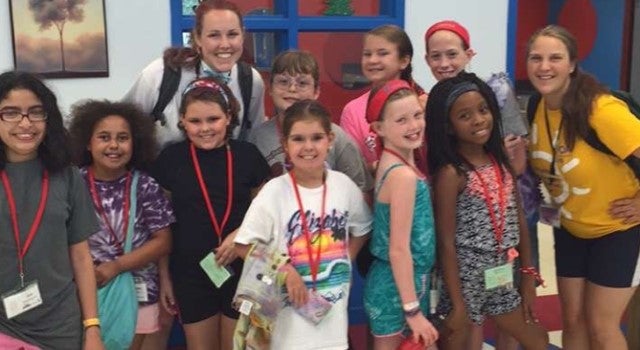 For most kids, summers are filled with swimming, cookouts, bike rides and lots of time spent outdoors. Some kids, though, only wish they could take part in typical summer activities but can’t because they have health conditions that don’t allow them to.

Fortunately, the Center for Courageous Kids (CCK) in Scottsville, Kentucky, offers summer camp just for these special kids so they too can experience simple summer joys. I had a chance to spend a week there this summer.

My week was much of what I expected — swimming, rock climbing, fishing, cabin living, silly counselors who are great with kids. But when I took a closer look, it is so much more.

CCK runs for nine weeks, each week geared toward kids with a different medical challenge. The week I attended was Camp Bravehearts, open to kids with heart abnormalities and congenital heart defects. The energy was palpable, every single day.

Each day I was amazed at the enthusiasm and excitement for the next adventure that awaited the campers. And I’m not talking about energy just among kids — what blew me away was the level of excitement among the staff and counselors. They are a special breed of people.

This was the camp’s last full week before closing for the summer. Not only did the same staff and counselors complete nine weeks with limited days off, they repeating some of the same activities, creating some of the same crafts, watched “Zootopia” nine times and sung infectious camp cheers and songs at least 1,000 times — I counted!

But you would never know it by their enthusiasm. To the kids, every experience felt like the first time for everyone involved.

The counselors scream chants, motion to songs, wear themed costumes and cheer on these special kids at every single opportunity. It takes a special kind of person to bring this to their work every day, at least six days a week, for seven weeks. I have to admit, I was exhausted just as a volunteer.

The camp’s director of communications, Stormi Murti, helped me come to terms with the “why” behind the camp.

Stormi and her husband, Roger, are two of a team of four who helped found the medical camp. Their story began in central Florida at another medical camp before they were recruited by CCK’s founder, Betty Turner Campbell.

As Stormi explained her journey to me, she described what I think of as her “over the fence moment.”

“I was in a terrible time in my life and had a conversation with Roger, my neighbor at the time, about the mission of a medical camp for kids,” Stormi said. “As he spoke to me over our fence, I stood there and it hit me — this camp is an opportunity for us to provide kids a chance to leave their health concerns at the front gate and just be a kid for a week. This is what I want to do with my life.”

If I had to guess, I’d say every staff member at CCK has had an “over the fence moment.” It’s clear they were born to do this kind of work just by watching them.

CCK serves many of our children who seek care at the children’s hospital in Louisville. Each week of the summer is devoted to kids with diabetes, muscular dystrophy, sickle cell, asthma, cancer, physical disabilities and more.

Many of the children’s hospital’s medical staff serve at camp, helping to provide medical care to campers and keep them safe while they have some fun.

I wasn’t sure exactly what to expect during my camp experience, but I can tell you this: Our children’s hospital and the families in our community are blessed to have a place like CCK. If you ever have a chance to volunteer, you will receive more from the experience than they receive from you.